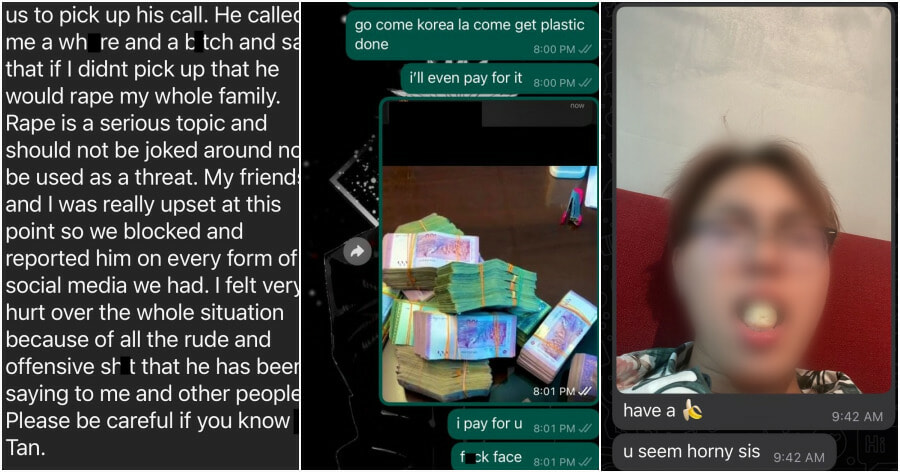 Although the rise of technology has brought about many positives, it has also allowed for crime and harassment to escalate.

Recently, a student of an international school in Kuala Lumpur shared that an ex-student of the same school has been sexually harassing girls inside and outside of the school. 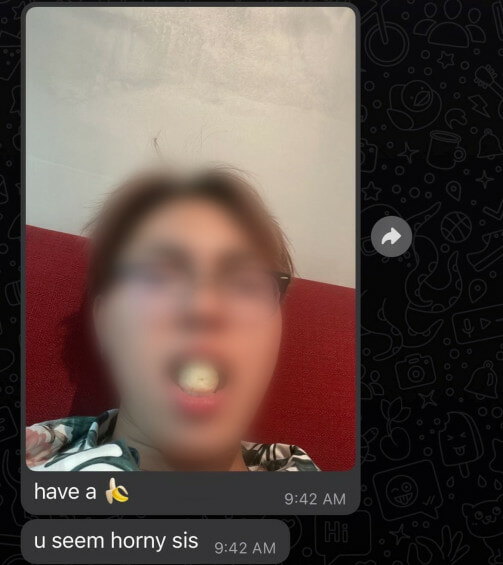 According to the student, the 16-year-old perpetrator known as Tan, has sexually harassed over 20 known victims, many of whom have united to share their experiences.

“Me and 4 others have teamed up to collect evidence against him and asked victims on what sort of things he has said or done to them.”

The student said that they have evidence which showed Tan sexually harassing his victims digitally and physically as well as encouraging them to drink alcohol and get intoxicated.

“He holds a fake IC which says that he is 19 and he also claims to be the son of Vincent Tan, which isn’t true,” said the student. 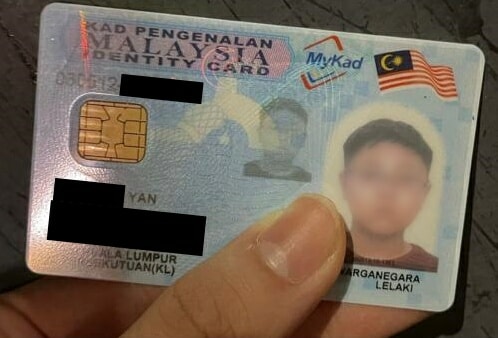 The student passed to WORLD OF BUZZ a Google Drive link of the evidence they have against Tan. It included things such as screenshots of him harassing girls as well as the victims’ experience of their interactions with him. 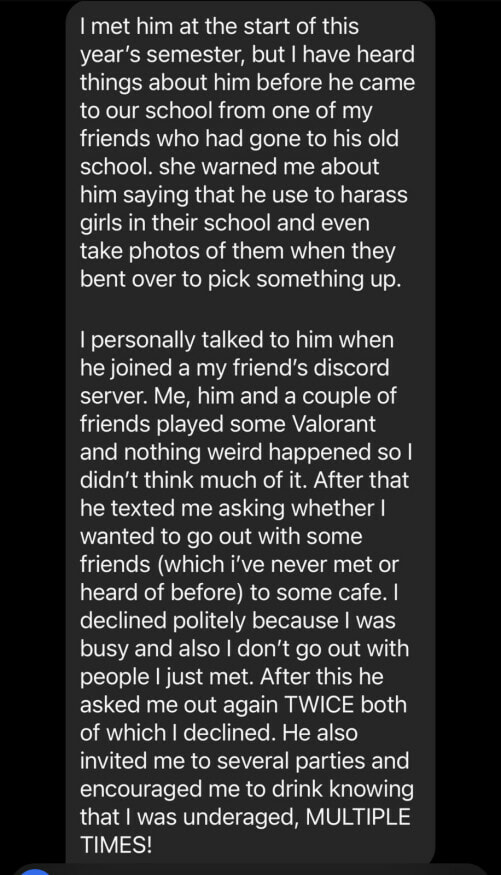 In one of their conversations, Tan tells her that she’s wasted potential because although she puts on makeup well, she doesn’t go clubbing. 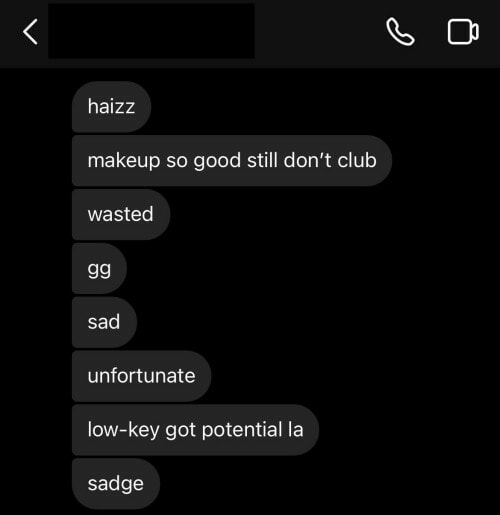 The same victim also accused that he has in the past, paid older woman to have sex and make out with him and even filmed it. 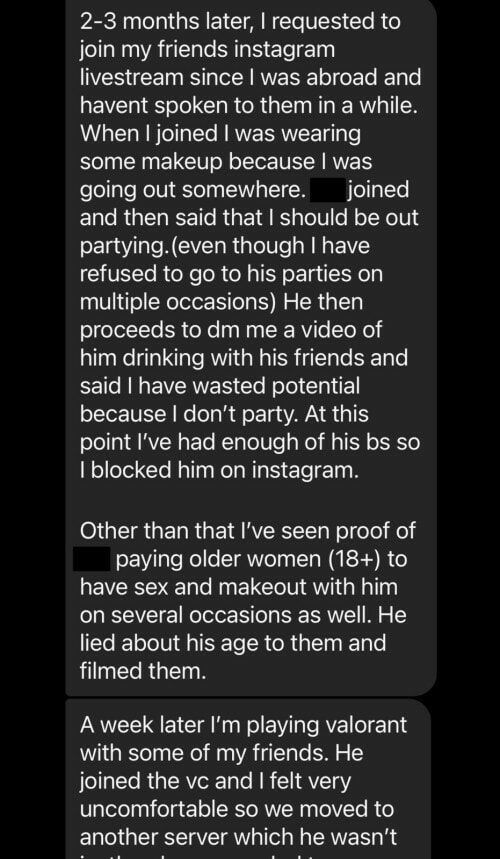 She added that once when she had blocked him on social media, he proceeded to call her a who*e and a b*tch and said that if she didn’t pick up his call, he would rape her entire family. 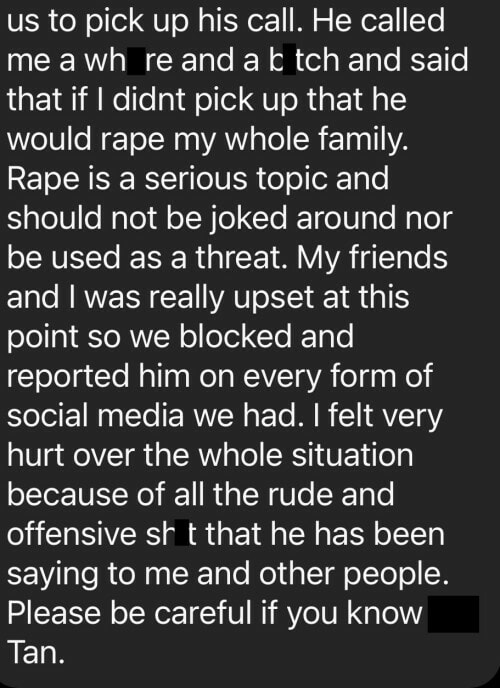 Meanwhile another victim said that she had met him during a night out and that he kept following her group and trying to buy them alcoholic drinks.

“He literally coerced us into his car to drive us home and he touched me inappropriately,” she wrote.

Another victim shared how when he got rejected by her, he proceeded to body shame her, send her inappropriate videos as well as showing her a stack of cash and that he’ll take her to South Korea to get plastic surgery done to her face. 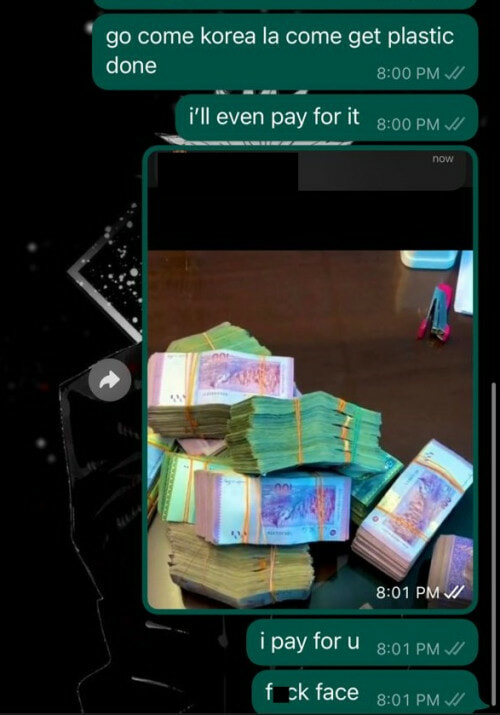 The stack of cash has been proven to be simply a picture from a TikTok content creator.

The group of students as well as the victims hope that Tan will be punished for all that he’s done.

“To this day, he is still harassing underaged girls and we need this to spread awareness about this dangerous person.”

Also read: ‘I hope you get raped and killed’ – Ain Husniza Receives Yet Another Threat After Posting Her Selfies 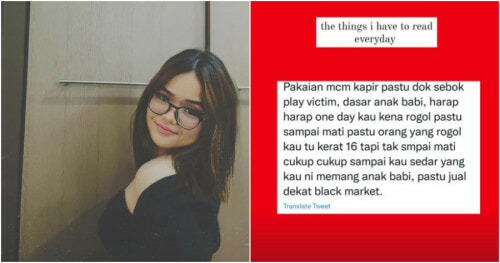