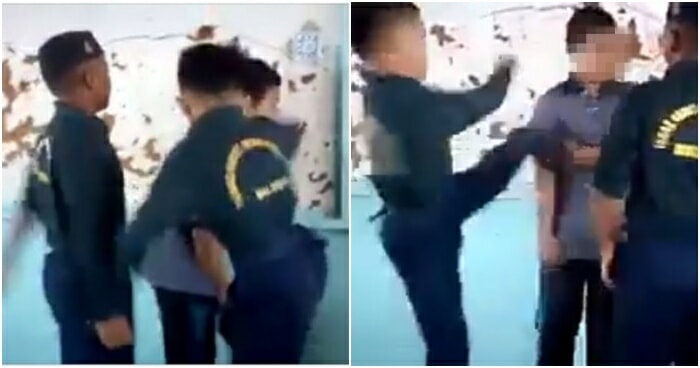 Our schooling days are supposed to be the most carefree of our lives, but this one boy’s classmates have turned it into a nightmare.

In a recent viral video, a Standard 6 boy is seen bullied by at least three classmates, who repeatedly punch, kick and shove him.

The boys who are all students of a primary school in Jertih, Terengganu, reportedly got into a disagreement this past February 12, after one boy became offended by another, although the exact cause is unclear.

mStar reports that the conflict had only been between the victim and one classmate at first. However, things escalated quickly when the classmate called on his friends to join in the bullying and beating. They basically formed a gang right then and there!

In the one minute and 26 seconds long video, the boys, clad in Youth Cadets uniforms, can be seen kicking the victim in the crotch, pinning him down while kicking him in the stomach, and punching him on the shoulder. Surrounded by his classmates, the victim is unable to do much to defend himself and is shown attempting to push his classmates away.

It is understood that the incident had taken place over recess, and that the video was shot by a fellow classmate. After the parents of the victim lodged a report, the smartphone containing the video was confiscated by the police to be delivered to the forensics unit in Kuala Lumpur, where they will determine the authenticity of the video.

While the victim was not severely injured (save for some bruises on his legs and hands), the state’s Education Director Shafruddin Ali Hussin has confirmed giving a counselling session for the boy at his house. He added,

“The bullies will also be required to undergo counselling so that they know what they did was criminal and inhumane.”

Besides that, Shafruddin Ali Hussin has also called on the school to tighten checks on students during recess and make frequent spot checks to ensure students do not bring non-permitted items such as smartphones to school.

UNICEF recently reported that in Malaysia, 8 in 10 students face bullying every day at school.

Whatever disagreement had gone down between the boys, violence is never, ever the solution! Here’s hoping the necessary persons keep up with the counselling sessions and continue to monitor the boys closely so that another similar incident would never happen again! 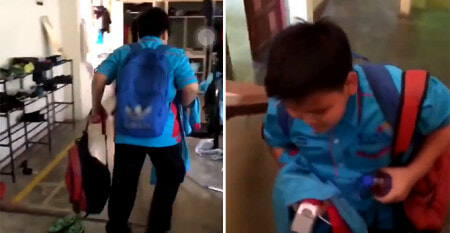