You may have heard, back in 2018, about a lonely dolphin left abandoned in an aquarium in Japan after the facility had closed due to the lack of visitors.

Unfortunately, that dolphin has passed away.

This news was shared according to the non-profit organization, the Dolphin Project, who have been trying to rescue Honey, the dolphin from Inubosaki Marine Park Aquarium since it’s was discovered to be abandoned. Just as the rescue operations were finally underway, the poor dolphin had apparently died.

Honey, the bottlenose dolphin, was captured back in 2005 during the Taiji brutal drive hunts for life in captivity.

Aquarium staff were reportedly still feeding the dolphin and other abandoned animals at the facility, though it is unsure as to how they did this and their food source. Penguins were also seen abandoned and confused.

It is still unsure as to the well-beings of the penguins.

In November 2018, the aquarium was allegedly in debt and was desperately seeking a buyer. In 2019, the aquarium had apparently been sold with Honey along with it.

The Dolphin Project apparently kept trying to purchase Honey so that she could retired in peace but conversations about the purchase ended in March 2020 and it become apparent that honey was unlikely to survive.

She died in her tank on the 29th of March.

With everything happening in the world, we genuinely hope that people see this as a sign and lesson that we have to stop treating animals like our toys, playing with them when we’re interested and leaving them after we’re bored.

Rest in peace, Honey, your suffering is now over.

Also read: 9-Day Old Baby Dolphin Dies While Being Forced to Perform For Audience at Dolphinarium 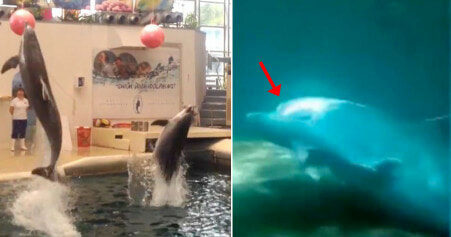