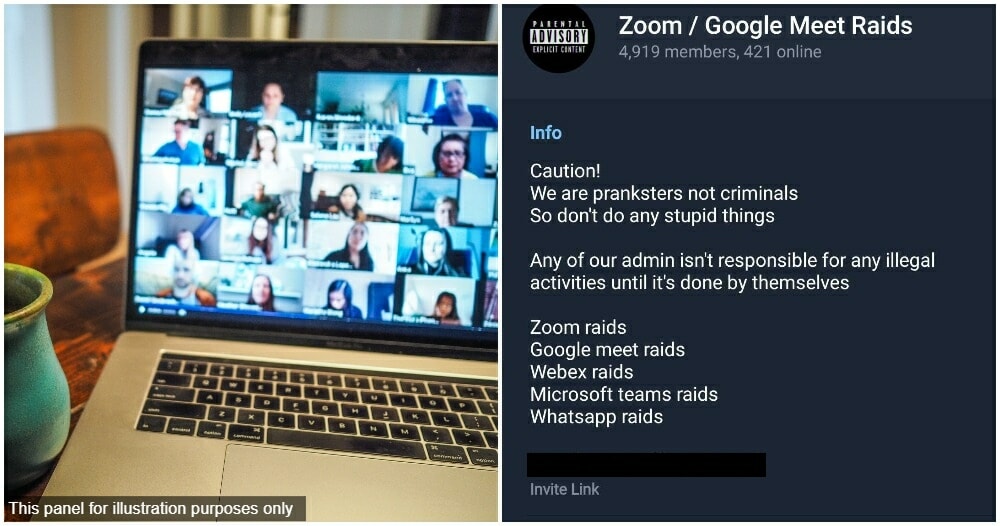 In any line of work, having meetings is an essential part of working, hence, during this pandemic, we have been spending much of our time on either Google Meets, Zoom or Microsoft Teams. However, it is very easy for a stranger to “raid” these online calls.

“Raiding” an online call is when a stranger enters the virtual call and starts sharing their screen which will display crude or nonsensical images or videos, sometimes even pornographic in nature. Some resort to turning on their microphone and yelling at them. 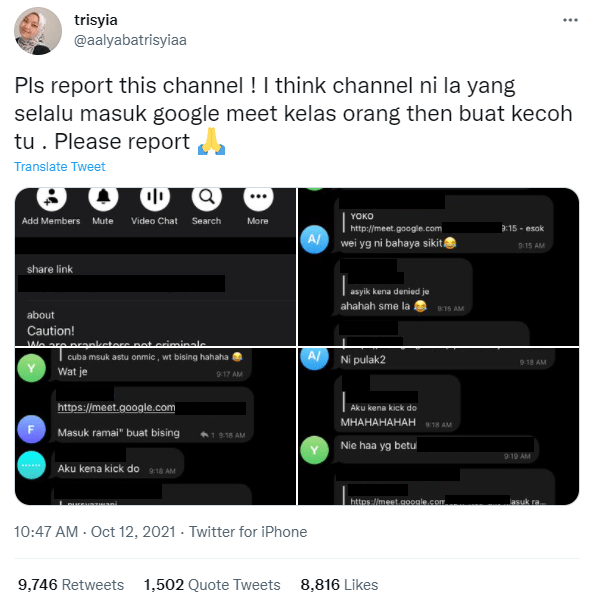 Some of us might think that this is an isolated case, however, a netizen by the name of Trisyia (@aalyabatrisyiaa) on Twitter has said that most of these “call raiders” are part of a bigger group on Telegram. In her thread alone, she has managed to list down three of these raiding groups. 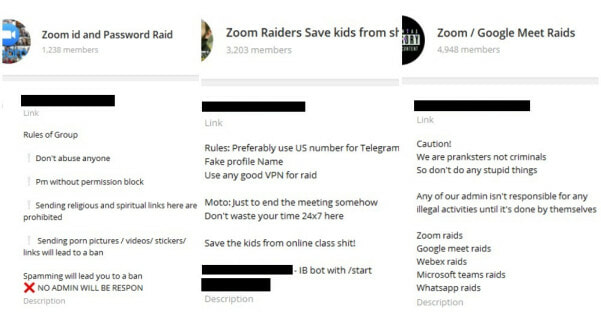 “We are pranksters not criminals. So don’t do any stupid things.”

Out of the three Telegram groups, the last one is the most active and seems to comprise mostly of Malaysians. Here are some of the conversations in the group that was screen captured by Trisyia. 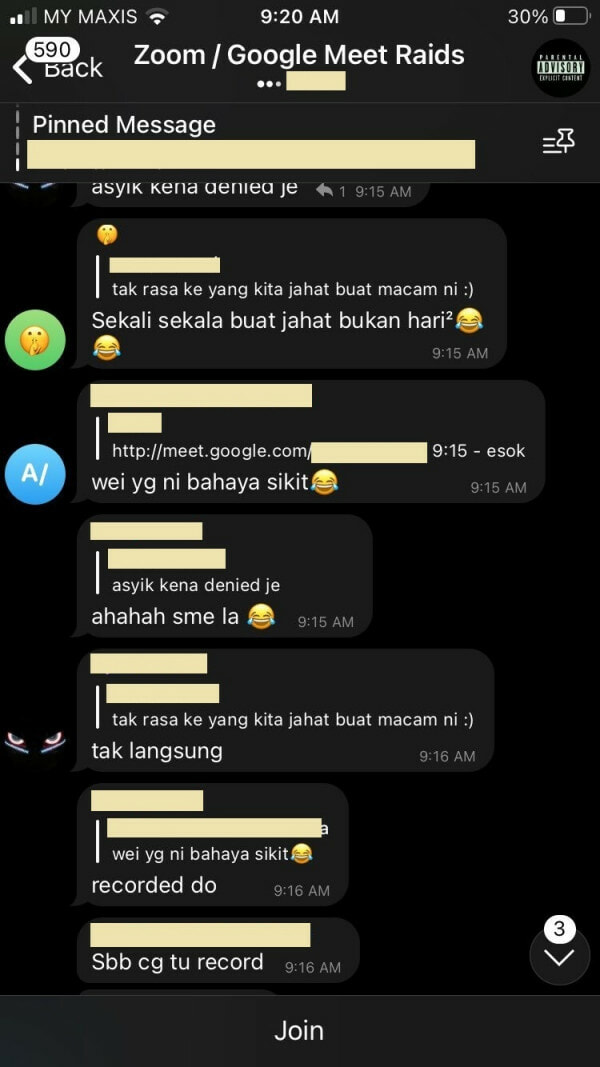 One of the group members asked if the others feel bad for raiding calls and someone replied that it is just a few times and not every day. 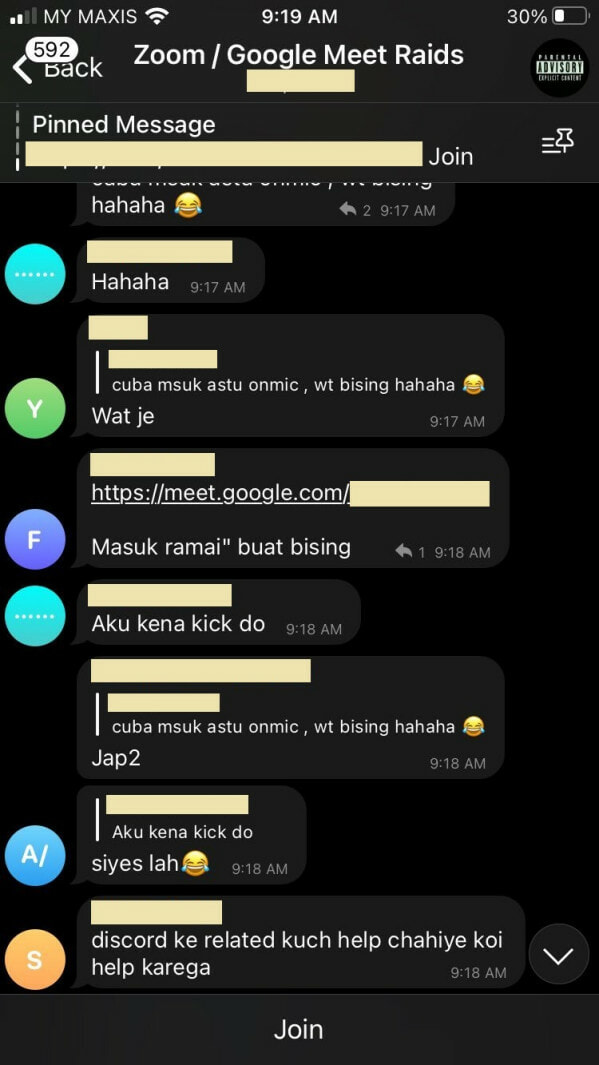 One person then sent a meeting link and asked the group members to enter it and make noise. 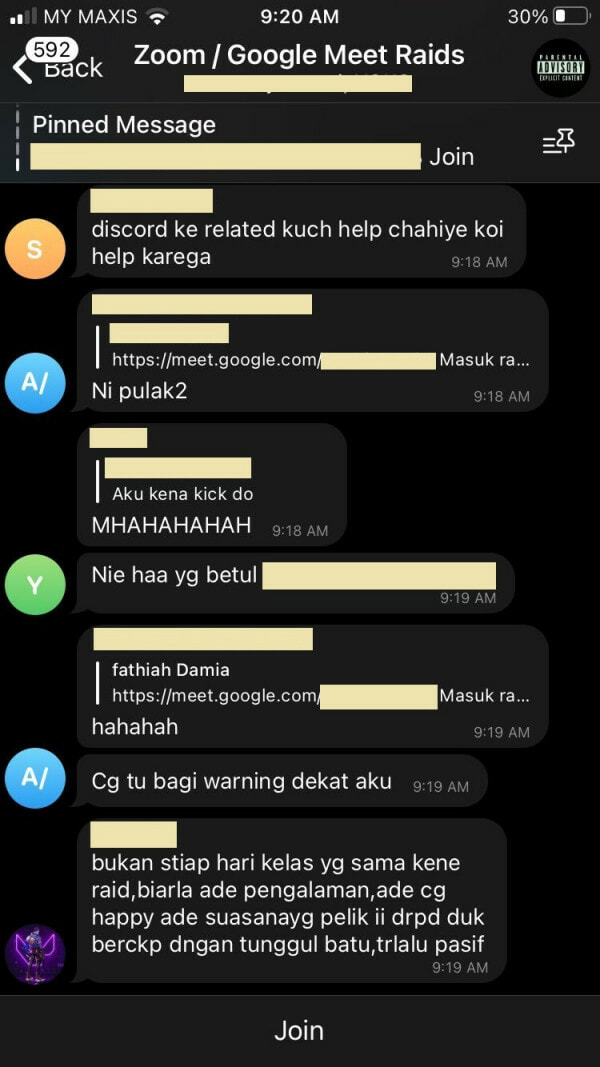 One person tried to justify their actions by saying that it’s not the same class that gets raided every day. They continued, “let them experience it. Some teachers are happy as having a weird atmosphere is better than talking to stones, too passive. ”

In the thread, Trisyia has asked members of the public to beware of these groups and to report them as well.

According to Mstar, the Criminal Investigation Department of Bukit Aman has received five reports regarding these “call raiders” on non-physical sexual harassment, misuse of networks and spread of pornography. It is said that in one of those cases, someone using a MOE email had shared a pornographic image. However, further investigations have shown that the ID was not listed in MOE, hence, authorities believe that this is the work of hackers. Be it as it may, the police are still investigating these cases.

This is certainly not a good thing! We hope that parents out there will be more vigilant in making sure that their child is not a member of these groups!

Also read: “Tested positive for being magnetic” S’poreans Are Claiming To Be Magnetic After Receiving Vaccination 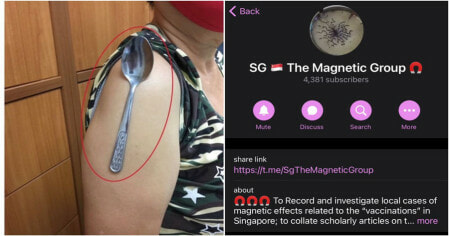