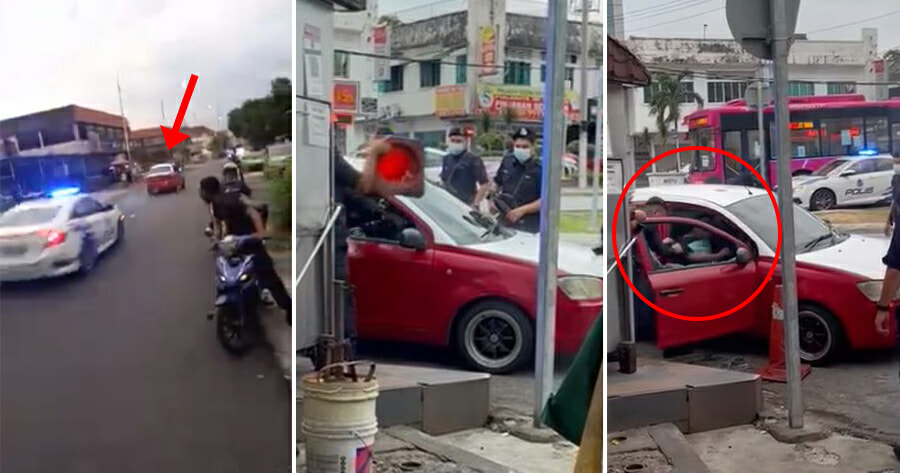 The police chased a suspect around for about 20 minutes before successfully arresting him after he tried to escape an inspection by the authorities.

Previously, several videos showed police in pursuit of a taxi driver at Jalan 18/16 in Petaling Jaya on Wednesday (2 June).

Sinar Harian reported that the police was about to conduct a ‘snap check’ at 6.40pm when the taxi driver suddenly sped off and almost hit pedestrians and other road users.

Petaling Jaya District Police Chief, Assistant Commissioner Mohamad Fakhruddin Abdul Hamid said that the police acted quickly and began chasing the suspect in the area before they managed to stop him in front of a bank in Pekan Lama.

The suspect, however, refused to cooperate by locking his car door, forcing the police to break the car window.

Mohd Fakhruddin said that during the arrest, two police officers suffered minor injuries on their hands and were treated at the University of Malaya Medical Centre (UMMC).

Meanwhile, a straw tube was found in the suspect’s car containing heroin weighing about 0.3 grams.

“The suspect who tested positive for drugs also has two criminal records and was involved in eight drug cases,” he said.

The suspect is now being remanded for three days while the case is being investigated under Section 12 (2) of the Dangerous Drugs Act 1952 and Section 186 of the Penal Code.

Also read: Man Steals Car From Woman At Traffic Light In KL, M’sians Band Together To Chase Him Down