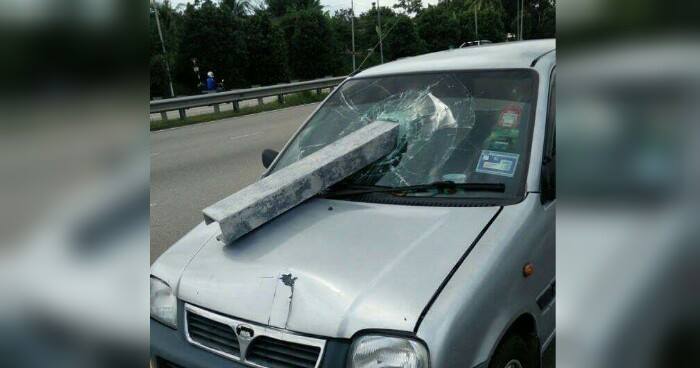 Who would have ever thought our Final Destination nightmares could actually turn into a reality?

A pregnant lady from Johor recently went through what would be the most horrifying thing in her life after a massive metal rod fell off a lorry and pierced through her car.

According to Twitter user Cik Senah Ronggeng, her pregnant sister was driving all alone when the nightmarish accident happened.

The incident took place on Janurary 10, 2017 along Nusajaya Highway. Apparently, the massive piece of metal flew off a lorry and pierced through the centre of the lady’s silver Perodua Kancil. 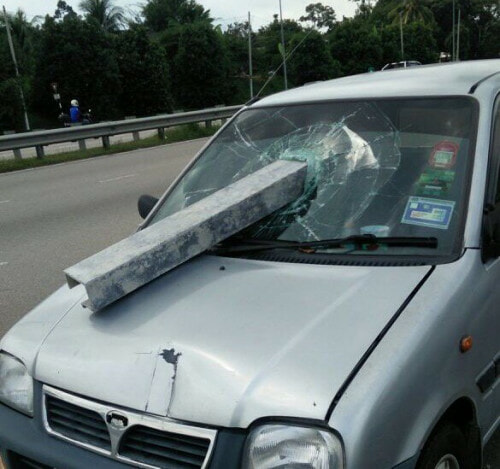 Thankfully the metal piece did not hit her at all although it was very close to her face. However, she did suffer a few cuts from the glass pieces from her windshield.

“Gila babi. This metal flew and hit my sister’s car at Nusajaya Highway. Luckily it didn’t hit her head.”

“Luckily my sister is okay. She’s just shivering. Crazy. She was driving all alone!”

Cik Senah explains that although her sister is in great shock, she still has no choice but to continue driving every day because that is her transportation to work.

The lady also explained that the case has been reported to the authorities.

According to Malaysian Digest, Harian Metro also reported that the Johor Police confirmed that this case is true. The Kancil was in the middle lane and the lorry was on the left lane when this happened.

“A metal panel fell off the truck and bounced onto the front windscreen of the Kancil.”

“The driver sustained minor injuries due to her hands due to glass fragments.”

The policemen mentioned that both parties have already lodged a police report of this freaky incident.

How scary! Always be safe while driving on the road, ugaizz. Never take your safety for granted. WOB hopes that Cik Senah’s sister may have a speedy recovery from this traumatic experience.