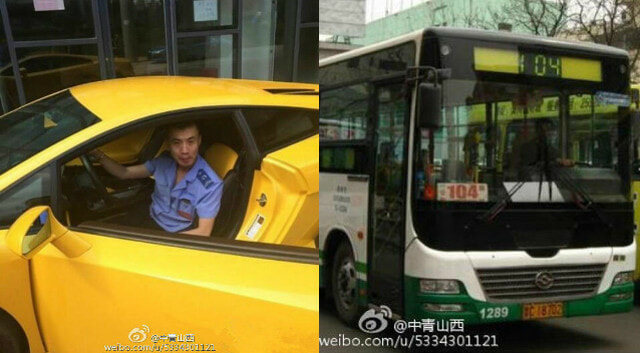 A public bus driver was spotted driving his car to work. However, what he was driving was the main question, as he left a lot of people’s jaws wide open.

Spotted in a yellow Lamborghini Gallardo and occasionally a blue Audi R8, the man from Taiyuan surprised the internet as images of him driving his luxury sport cars to work were circulated online, instantly going viral.

According to reports, the man actually just sees himself as any other ordinary citizen and did not attempt to brag not show off to any of his colleagues nor peers.

But what comes down is this question that everyone is asking, “Where does he get his money from???”

As we all know, being a bus driver isn’t exactly the best paying job out there, so how exactly does this man afford these million dollar cars?

The guy is also said to be a member of  a luxury car club in the city. *Gasps!*

Taiyuan is the capital and largest city of Shanxi province. The city is known where citizens often have gaudy displays of wealth, showing off how much money they have.

Online publication Shanghaiist joked that Taiyuan is so atas that the bus driver also drives a fancy car.

The man’s identity is still unknown but there has been speculations from netizens saying that this man is actually a ‘tuhao’, a term used in China to describe a rich person. That he is probably just concealing his real identity by being a humble bus driver during when he’s working.

If you’ve any information on that man, contact us. We wanna be his friend too.