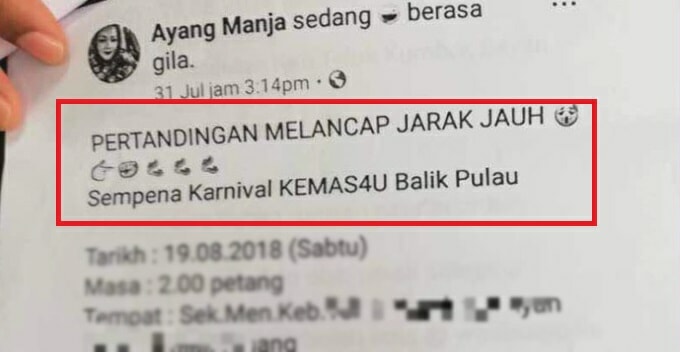 The terms and conditions set for this event are quite mind-boggling as well. They include: The senior assistant principal of the school immediately alerted the principal and subsequently lodged a police report. By that time, the post had already been shared with multiple Whatsapp groups and by several teachers.

The school had clarified by saying that the Facebook post was fake and that the school’s reputation has been tarnished. Also, 18 August is actually a school holiday and hence, no event will be held.

“It is irresponsible to post such fake event as it creates speculations and tarnishes the school’s name while raising concerns among students and parents especially due to the current sensitivity on such issues.

“The case will be investigated under Section 233 of the Communications and Multimedia Act 1998 for improper use of network facilities,” Southwest district police chief Supt A. Anbalagan said.

It was later found out that the Facebook post was recycled from a similar fake post from two years ago. The police have urged members of the public to stop spreading the fake messages even as a joke because it is jeopardising the school’s image.

To be honest, any seasoned netizen can outright tell that the Facebook post was fake. We wonder why the person behind this would even try posting it in the first place.