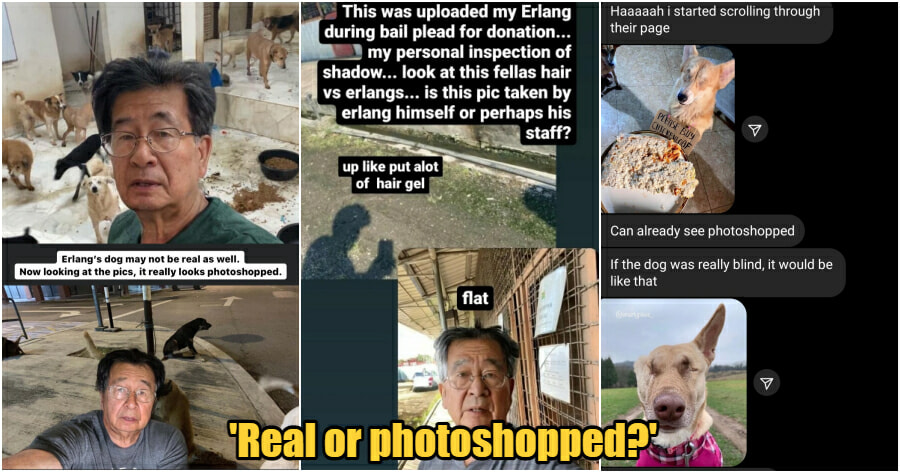 Recently, a local pet shelter, A Pet’s Journal found itself under fire after allegations surfaced that they were running a scam operation. Subsequently, a Facebook page was created on 13 September where users and long time followers alike shared their experiences and thoughts on the dog shelter.

One of the many allegations that were made against ‘A Pet’s Journal’ is that they were running a number of dog shelters, namely Quan Shelter and Erlang’s Dog. At the time of writing, ‘A Pet’s Journal’s website and Facebook page are still up and running, while the other two accounts remain inaccessible ever since yesterday (14 September). This has of course raised more questions than answers amongst netizens.

Just this morning, A Pet’s Journal released a statement via their Facebook page to explain their stand as well as further action they’ll be taking. In the post, they revealed that the location of their shelter has never been disclosed in order to avoid people from dumping dogs at their shelter, as well as to avoid any unwanted complaints being lodged to the authorities.

In concluding their statement, they stated that they would have no choice but to release or give the dogs to the authorities if the allegations continue to escalate further. This stirred rage among netizens as they felt that this was a form of emotional blackmail.

Speaking to WORLD OF BUZZ, a user who wishes to remain anonymous took the liberty to share with us, a bunch of photographs posted by ‘A Pet’s Journal which are believed to be photoshopped in order to manipulate the emotions of fellow dog lovers into contributing to their cause.

Were these images photoshopped?

Amongst the many pictures, one featuring a “blind” dog was shared by ‘A Pet’s Journal’ on 7 September via their Facebook page. According to another user who was familiar with photo editing application, Photoshop, he explained his thoughts on what a real blind dog would look like. 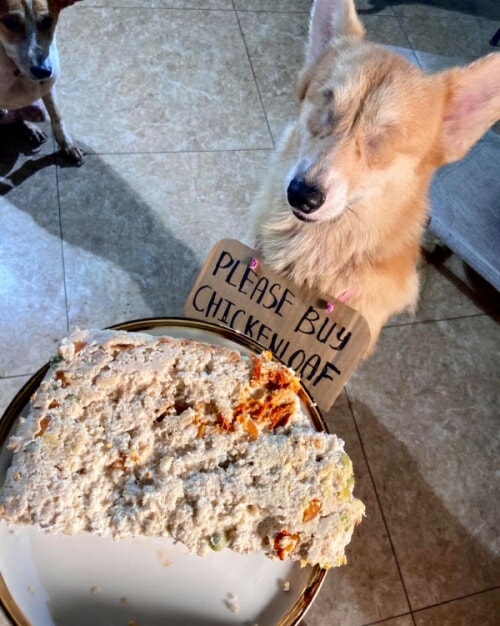 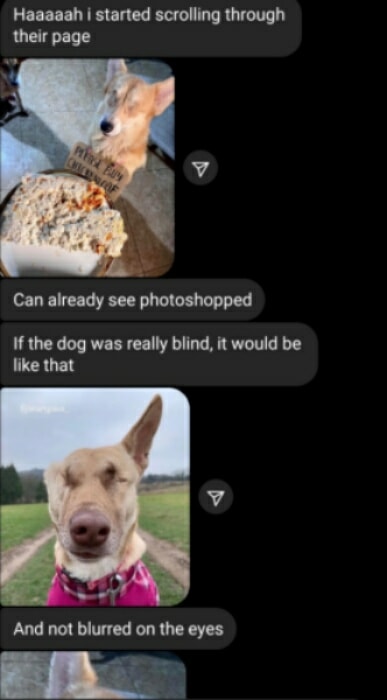 The person also demonstrated how easily an image can be doctored in less than a minute.

Furthermore, the person also shared his thoughts on another edited image based on his experience using Photoshop. 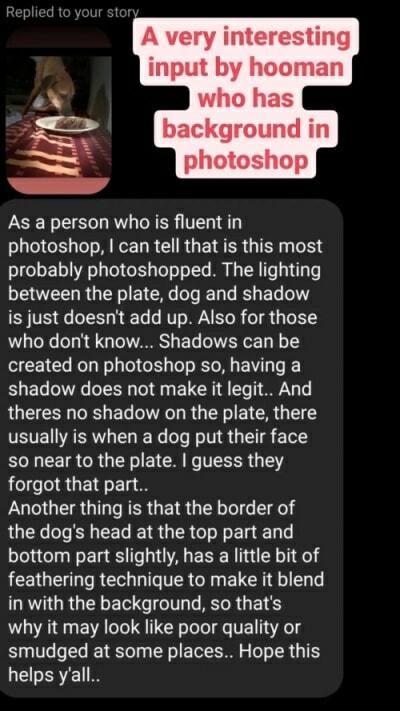 Late last year, APJ  also shared an image of a dog with bloody eyeballs which were apparently “displaced” after a fight with a larger dog. 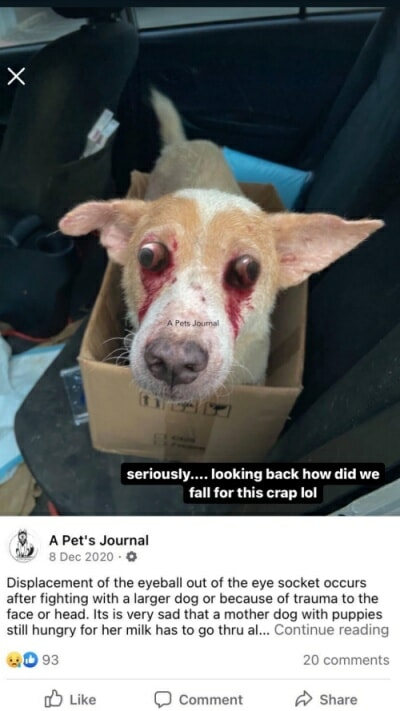 In another picture,  two people can be seen wearing APJ’s t-shirts, which is one of their merchandises and claimed to have to been to the shelter but netizens seem skeptical about it. 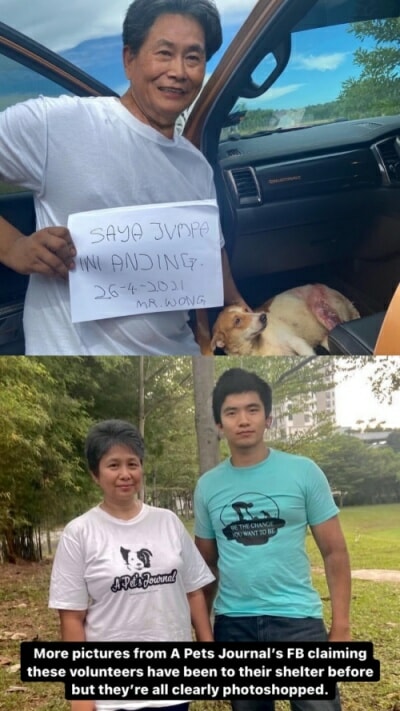 Netizens zoomed in closer on the image to show what seems to be a swirl around the man’s neck which could indicate that the image could have been altered. 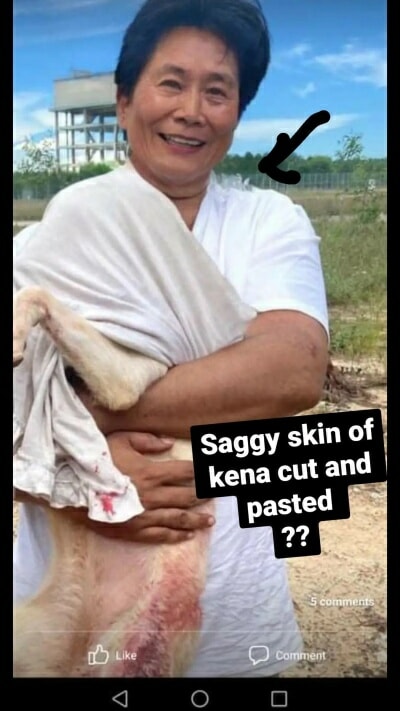 Similarly, ‘Erlang’ has never disclosed his location and contact number, apart for his banking details. The page was seemingly run by an elderly Chinese man who claimed that he had contracted Covid-19, just two weeks before the page was eventually deactivated.

In one of the images which was shared by Erlang in his posts, netizens managed to spot the differences between his hair and the one reflected on his shadow. 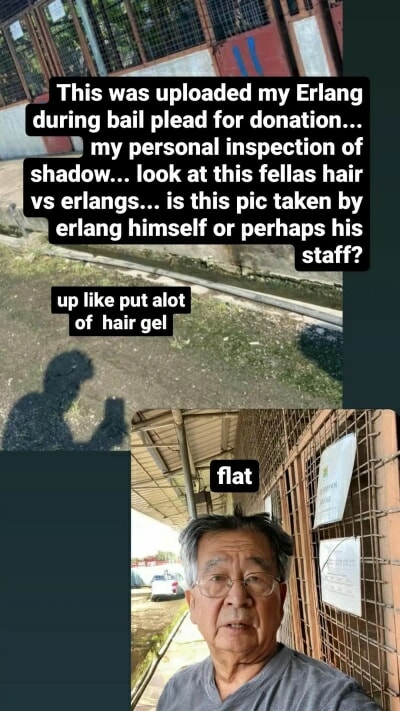 Meanwhile, some users have also expressed their skepticism on how the dogs in Erlang’s picture might not be genuine, after all. 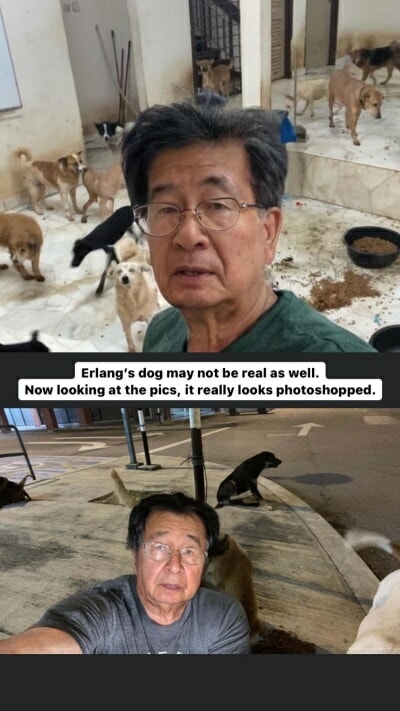 One of the anonymous users also revealed to WORLD OF BUZZ that a man named Siva is supposedly one of the founders of ‘A Pet’s Journal’ who claims to be married to Dr Jess, who is a vet. Whilst many have spoken to Dr Jess via phone call, no one has actually met her physically, leaving them to wonder if Dr Jess is real.

It was also exposed that the real wife of Siva, a woman by the name of Pavitra, has allegedly taken on the identity of Dr Jess.

Furthermore, suspicions amongst netizens were also raised when they noticed that none of the accounts of the dog shelters had ever appeared live via Facebook. This suspicion was further escalated when netizens recently found that some of the comments that appeared on APJ’s Facebook posts were filtered or removed. 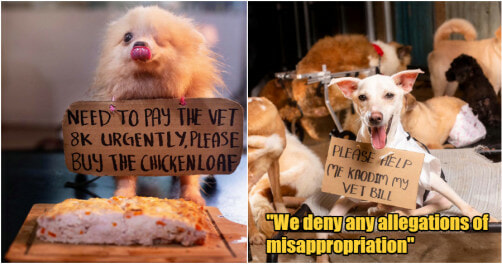