Not even a full week after they published a list of LGBT ‘traits’ filled with unfounded stereotypes and generalisations, the same Malaysian publication has once again come under fire.

Just last week, this local newspaper published an article about a preacher who intended to educate the public on how to approach and “guide” the LGBT community. This got the attention of not only local netizens, though, because the backlash was also covered by international news portals.

Although the intent of the article was not to criticise this minority group, they decided to compile a list of characteristics that are quite… well, take a look for yourself!

Fast forward to today, the local publication once again drew the ire of netizens when an article about addiction was recently put out in the newspaper.

As soon as news of this began to circulate, loads of Malaysians took to social media to give their two cents.

A good number of netizens also pointed out that the article failed to highlight addictions that were detrimental to health, among other issues.

What are your thoughts on this latest article? Let us know in the comments below! 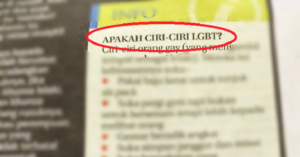