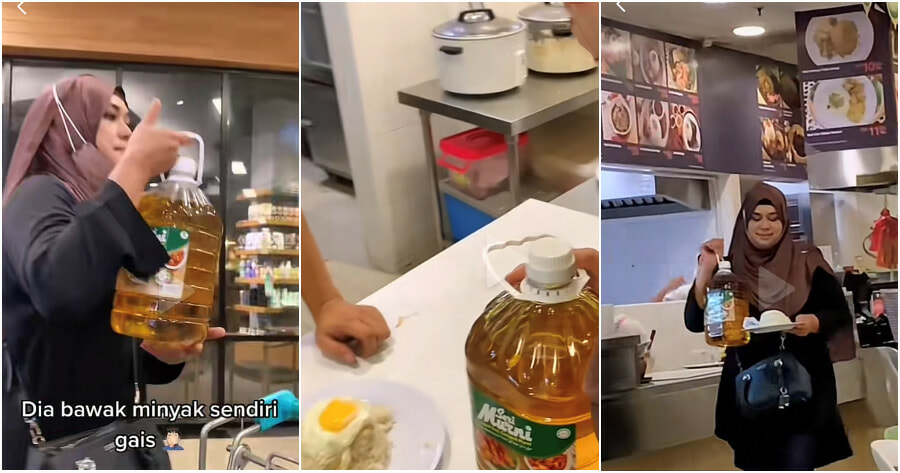 You ever want something so bad that you would resort to anything to get it? Even if it might make you look a little funny?

A TikTok video of a Malaysian woman who brought her own cooking oil to a food stall in a shopping complex has gone viral. The 37-second video has almost 300,000 views as of time of writing.

In the video, it appears that the woman wanted to place an order for some food but could not because the food stall had run out of cooking oil.

The video which was posted by the woman’s son, shows her walking from the food stall to her shopping trolley where she grabbed a bottle of cooking oil she had just bought.

With the bottle of cooking oil in hand, she then walked back to the food stall to place her order.

Upon receiving her order, which was a plate of fried rice and a sunny side up egg, the woman can be seen smiling smugly, looking satisfied with herself and her food.

Amused and slightly embarrassed with his mom’s antics, Iskandar had captioned the video “We are the ones who feel embarrassed instead, but there’s really nothing we can say when it comes to moms right.”

Looking at the comments, it is obvious that many netizens found the video funny.

One netizen shared that they could relate to the woman.

“If KFC runs out of wedges, I’m willing to buy a whole sack of raw potatoes (for them),” they said.

Whereas another netizen was thinking realistically by asking more practical questions such as whether the woman received a discount for bringing her own cooking oil.

Additionally, there was a netizen who jokingly exclaimed that ,”Fortunately, the woman did not just enter the kitchen to prepare the fried rice herself!”

Whether the food was for herself or for her children, one thing is for sure, a mother’s persistence knows no bounds!

Have you ever seen or done something similar? Let us know in the comments!

Also read: Woman in China Lines Up For 2 Hours To Get Swab Test, Turns Out It’s The Line To Buy Roasted Chicken 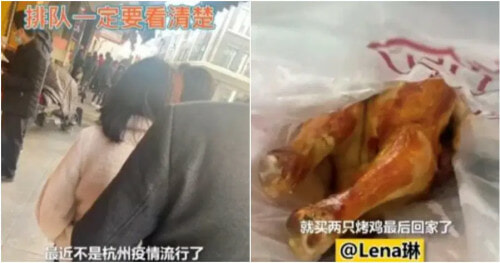