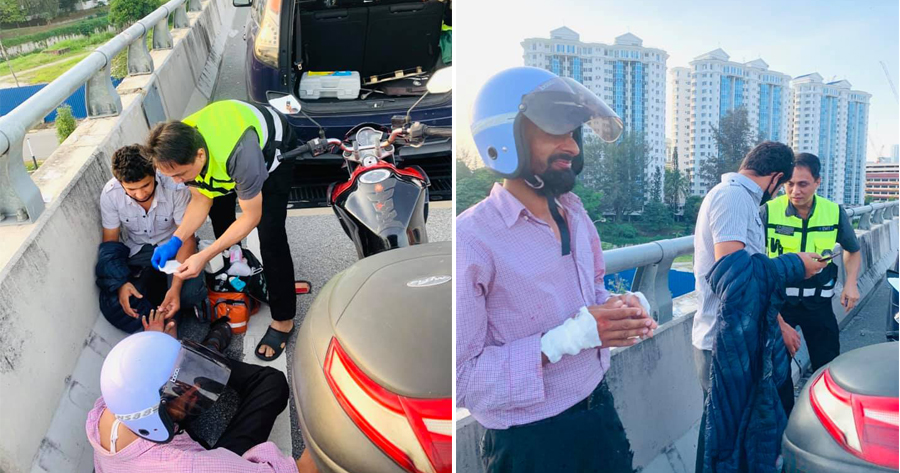 An officer from the Malaysian Civil Defence Force (APM) Kuala Lumpur has received praise from netizens for his generosity in helping two motorcyclists who crashed into his vehicle on 1 September.

In the incident that happened in the morning, Kuala Lumpur District Malaysian Civil Defence Force Officer, Lt (PA) Hishamuddin Salleh, was on his way to work when his car was suddenly hit from the back. However, instead of getting angry, he decided to help them instead. Hishamuddin, who is also a volunteer firefighter from FGV Kuala Lumpur, quickly stopped by the roadside and tended to the wounds of the two motorcyclists who sustained injuries from the collision, reported Sinar Harian.

“He (Hishamuddin) parked at the side of the road and put his car signal in emergency mode,” Facebook user, Arman Imran shared, adding that the accident was caused by the negligence of the two motorcyclists.

He shared that Hishamuddin opened his car boot, took out a first aid kit and treated the motorcyclists’ wounds wholeheartedly and with empathy. “Real hero to me. From the bottom of my heart, I salute you,” Arman wrote.

The inspiring story received praise from netizens who said that Hishamuddin’s actions should be used as an example by the community.

We need more people like Hishamuddin Salleh! His actions certainly are a great example for many of us to follow!