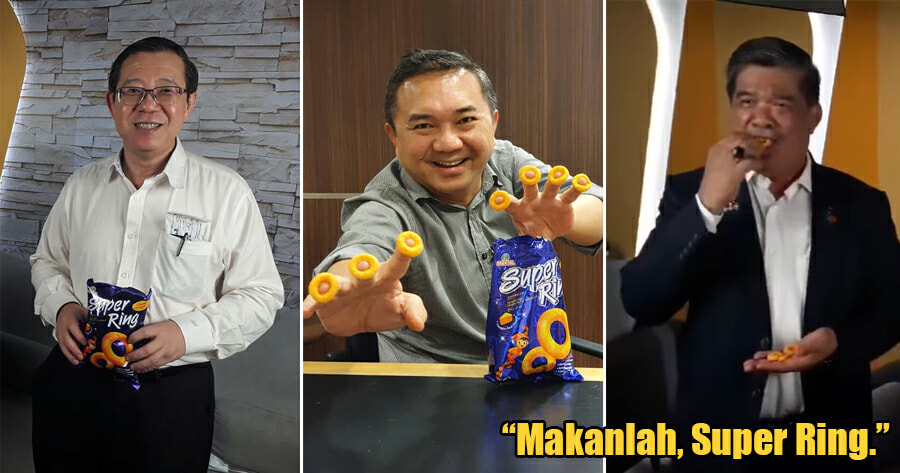 The hottest news in town for the past few days have been about Datuk Seri Najib Razak being found guilty for all seven charges in his SRC trial on 28 July 2020.

Ever since then, the internet has been buzzing with memes and witty comments about the much-anticipated event with many politicians joining in and letting their sentiments be known.

Among many comments hinting at prison jokes and the millions of dollars Najib has allegedly stolen, popular Malaysian snack, Super Ring has been the theme of many posts on social media recently. Super Ring has been strongly associated with Najib since May when he tried to troll rival politicians after posting a photo of himself eating the snack.

But almost immediately after the verdict was presented by the High Court judge, many Malaysian politicians started posting selfies with Super Ring as a comeback for the times Najib tried to troll them.

1 ring for 1 charge, how many super rings I have on my fingers? #buktiphbenar#superring pic.twitter.com/HK3wnEPicV

There’s even this cute video by Pakatan Harapan’s Mat Sabu and Lim Guan Eng sharing a packet of Super Ring.

Lim Guan Eng: “Later he (Najib) will troll us again”

And one from chief of Selangor Parti Keadilan Rakyat Youth wing, Najwan Halimi.

Of course, Malaysian artist Fahmi Reza had to join in and edited a photo of the snack to depict handcuffs being pulled out of the iconic blue packet.

And apparently, one Tesco branch put Super Ring on discount.

Najib, however, appears to be unfazed.

On 29 July, he re-posted the original photo of him eating Super Rings alongside a news clipping that said the Pakatan Harapan government in the state of Sabah was likely to collapse soon. “Another collapse?” he wrote.

Ever since his conviction, Najib has voiced out that he “wants justice” and is in the process of appealing to the Court of Appeal on Monday (3 August). In the meantime, he has made international headlines with an Australian newspaper labelling Najib as a “Plundering Idiot“.