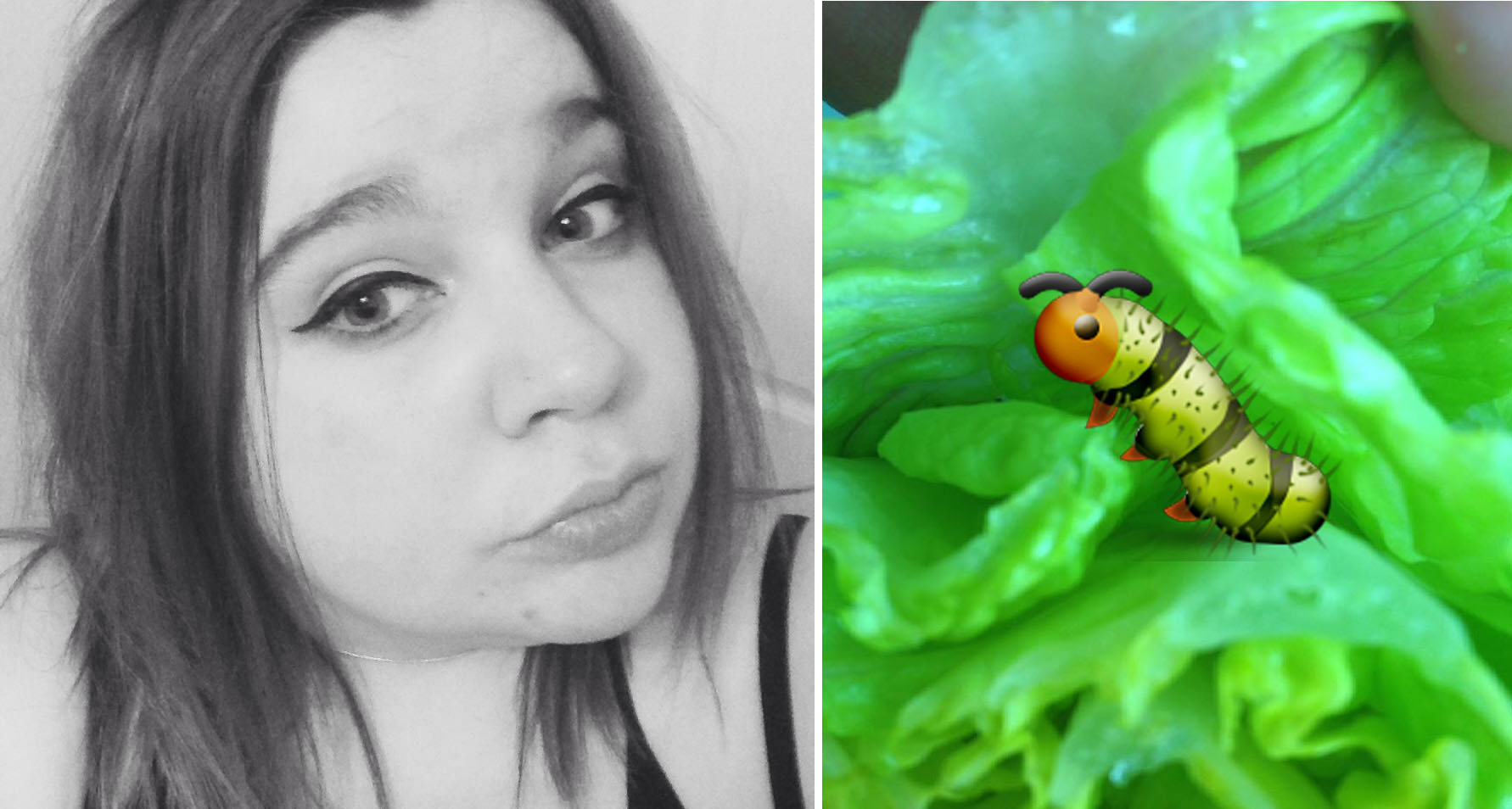 We definitely come across the occasional worm/bug while washing the vegetables after purchasing them from the market. However, when Abigail Louise Tysoe found a little caterpillar hanging out in the lettuce that she bought from Tesco, she decided to write in their Facebook fanpage.

In a Facebook post that garnered over 55,000 shares and counting, Abigail wrote, “For all whom is concerned Jeffrey is alive and well and he’s happily munching on some flowers as we speak.”

She cheekily added that she has named the little guy Jeffrey and that she would like to inform its friends and family out there that it is safe and would be taken care of up till the day he turns into a butterfly. 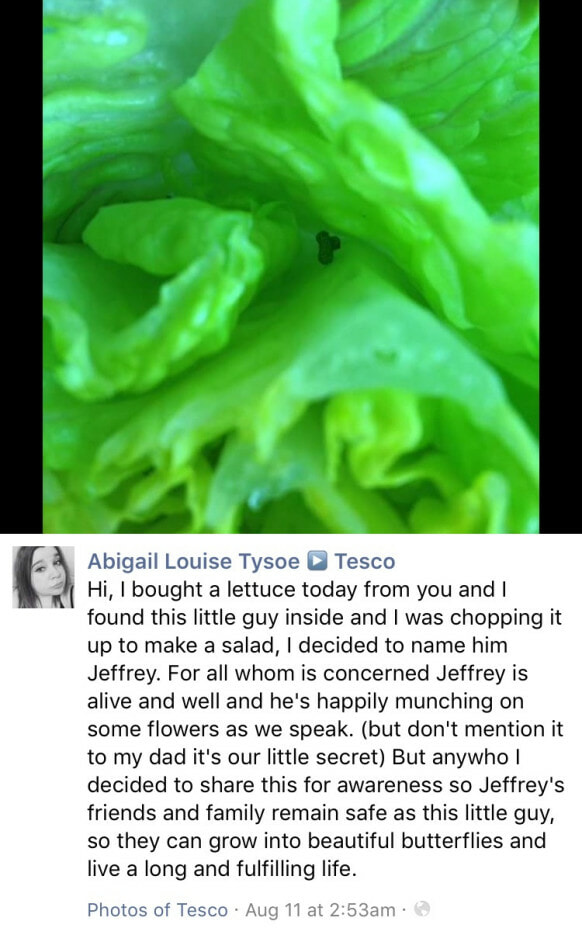 But what’s more surprising is the equally comical response given to her by Tesco’s customer service representative Steffan. Steffan informed her of their relieve at Tesco as Jeffrey happens to be their colleague and had gone missing.

He wrote, “We looked everywhere, magnifying glasses at hand. We had his wife on the phone at us, but I’m afraid I couldn’t understand what she was saying as she’s a caterpillar. I imagine she was quite upset, though. We assisted the local authorities with their investigations, but alas, Jeffrey was nowhere to be seen.” 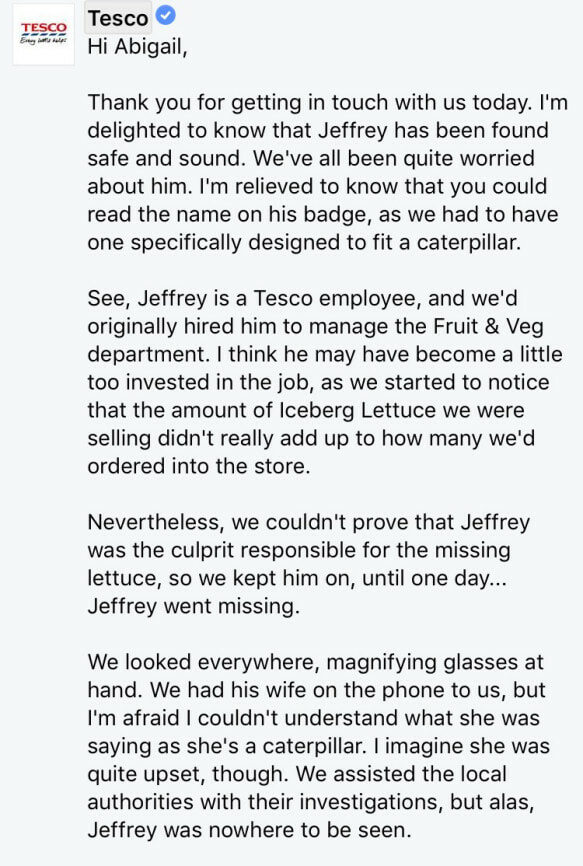 In apology for the inconvenience Jeffrey has caused, Steffan offered to have the lettuce compensated and also shared a poem with Abigail for the happy accident of finding Jeffrey. 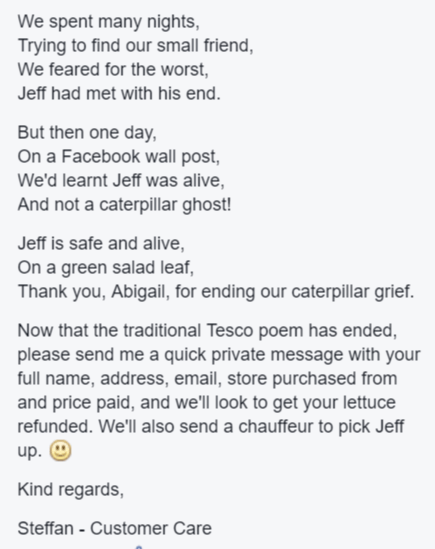 Tesco’s Steffan mentioned about Jeffrey’s wife and after coming to know that Jeffrey has a worried wife out there, Abigail decided to do the responsible thing and requests Steffan to help send her love to Mrs. Jeffrey, which he happily obliges bringing this story to a happy ending. Awwww! 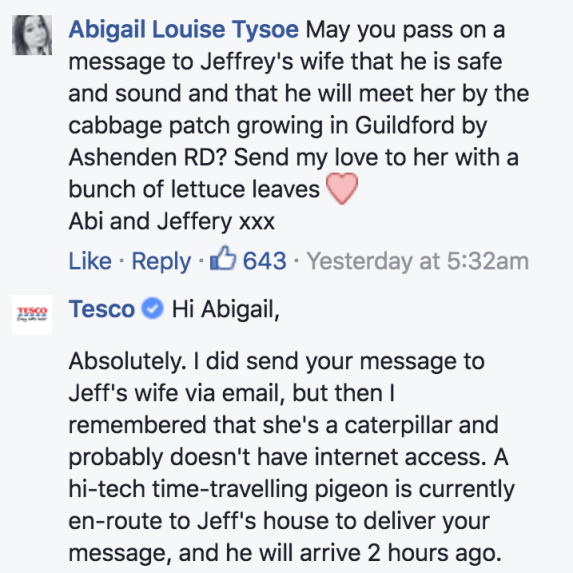 Netizens were amazed at Tesco’s reply, calling it epic and that the customer service representative Steffan was a true legend.

“This is the most adorable thing I’ve ever read oh my god!”

“I can’t even find words!??? This is absolutely brilliant!”

Here’s to Jeffrey and his life. Let’s hope he grew up to be the most beautiful butterfly.