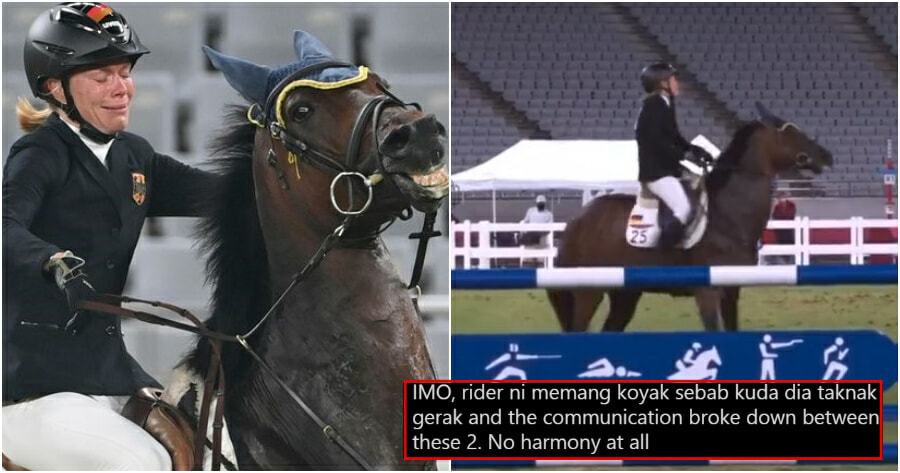 “As a rider, we cannot breakdown whilst we are riding the horse as they are sensitive towards its surroundings.”

On August 6, after a seemingly disastrous performance at the modern pentathlon event, German rider Annika Schleu and her coach, Kim Raisner were faced with backlash from netizens after they were seen hitting a horse.

After seeing all the backlash, Malaysia’s former national equestrian athlete, Aamelia Termizi decided to provide her thoughts on the performance via a post on Twitter on August 9.

Okay I’ve received a request to do a commentary on the controversial ‘horse punching’ issue ride from this german athlete on the last modern pentathlon event. It’s not pretty i tell you & sis tahan banyak tahan sabar bila video ni https://t.co/r9YaRFrbPr

In her post, she explained that most equestrian riders such as herself are not fully knowledgeable enough about the modern pentathlon event, hence she has taken the liberty to find out more.

“This event is a mix of five different sports in order to replicate the ancient pentathlon where those five skills were crucial. These skills are fencing, swimming, showjumping, cross country running and pistol shooting.”

Aamelia then went on to explain that in show jumping, it must be noted that the riders do not use their own horses due to the belief that in the ancient pentathlon, being exceptional will require one to be able to ride any of the horses available.

“In modern pentathlon, the rules are similar and athletes will have to draw a horse at random and warm up with the horse for 20 minutes before competing,” she said.

She then proceeded to comment on Schleu’s performance and said that at the start, we can already see the anxiety of the horse named Saint Boy, whilst Schlue is not providing any form of cooperation.

“As a rider we should not breakdown whilst we are riding as horses are sensitive towards their surroundings. If you are nervous and stressed, the horse would feel ten times worse. This is the situation before she even started her performance”

She then explained that if it were her, she would have given the horse a chance to relax and familiarise itself with the surrounding conditions. “The rider looks very frustrated (maybe from the warmup session itself) and is rushing to complete the course without full power.”

Problems with the performance

Aamelia explained that the problems can be seen during the 2nd fence where Schleu has not given the right amount of power to attempt the jump and we can see that the horse is second-guessing itself.

“Another refusal from the rider. The rider has lost her confidence ever since the 2nd fence. As for the horse, after it has hit the 5th fence, it must feel scared and nervous and the rider is not making the situation better so coming to the 6th fence is a nightmare as it is a double jump, she explained.

She can’t jump the double fence dah & need to go on the 7th jump. Keep in mind, the horse dah traumatized sbb he knocked & stopped at the last fence. So confirm the horse will stop at the next fence. We can see that coming…

She pointed out that the horse is already traumatised since it has knocked and stopped at the last fence, so it is expected that the horse will stop at the next fence.

So for this event, annika was eliminated and tak dapat points. For modern pentathlon event, dia kena rely on her swimming, fencing, and laser run je. Some people debated that this event in pentathlon macam lottery sebab you taktau kuda apa yg you dapat & ikut luck. Kesian dia

Touching on the horse punching issue, Aamelia said that it shouldn’t have happened since there should be no interference from the outside once the rider enters the arena.

“The coach was kicked out for interfering and not for hitting the horse,” she said.

“Also, it wasn’t a punch and a horse actually can’t feel much so there is no need to worry.”

She explained that a horse is a very majestic and powerful creature. Hence, the way that Schleu hit it actually will not have harmed the horse.

What i can see is maybe kuda tu had a traumatic experience with previous rider or uncomfortable with the surroundings. I heard there was many elimination for this event from many riders. The organizers need to recheck on the conditions of the horses, riders, tack, & environment

Aamelia believes that what has happened was a result of the horse having a traumatic experience with a previous rider and/or is uncomfortable with its surroundings.

“The organisers need to recheck on the conditions of the horses, riders, tack as well as the environment.”

This is in line with Germany’s Olympic team chief Alfons Hoermann’s statement who demanded that rules from the international federation needed to be changed.

“We also consider that an urgent review of the incident is necessary, especially in terms of animal protection, and that the national and international federations draw their conclusions.”

“Rules must change in such a way so that rider and horse are protected. The focus must be on the welfare of the animals and the fair competition for athletes.” 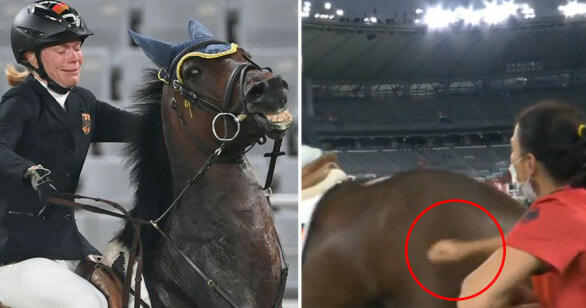