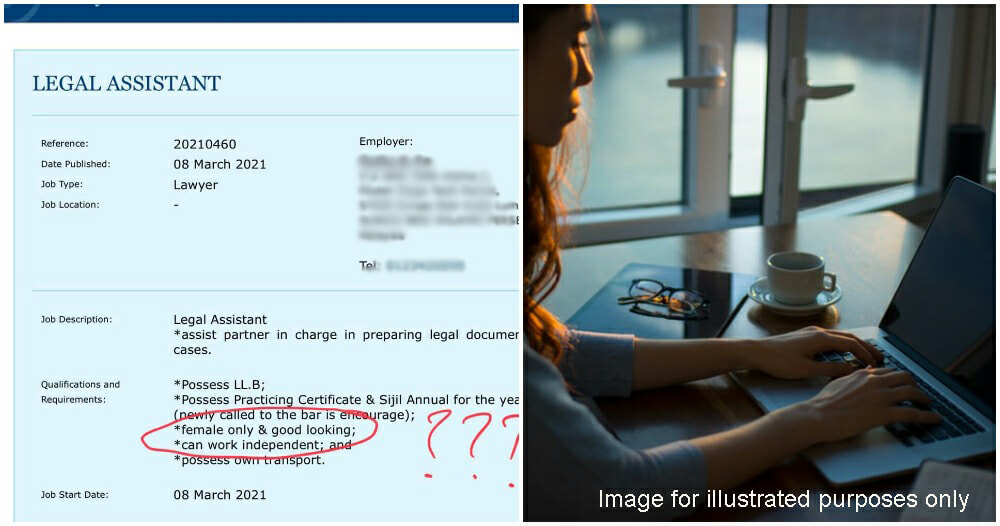 How do we create a safe workplace for women when situations like this still exist?

When the whole world was focused on women empowerment on 8 March, a Malaysian law firm went viral for all the wrong reasons. Facebook user Aidil Khalid posted about a KL law firm that posted about a sexist job requirement which he said was first discussed in the National Young Lawyers and Pupil Committee WhatsApp group.

The firm posted a job vacancy for a legal assistant and one of the job requirements was that the candidates had to be female only and good-looking. 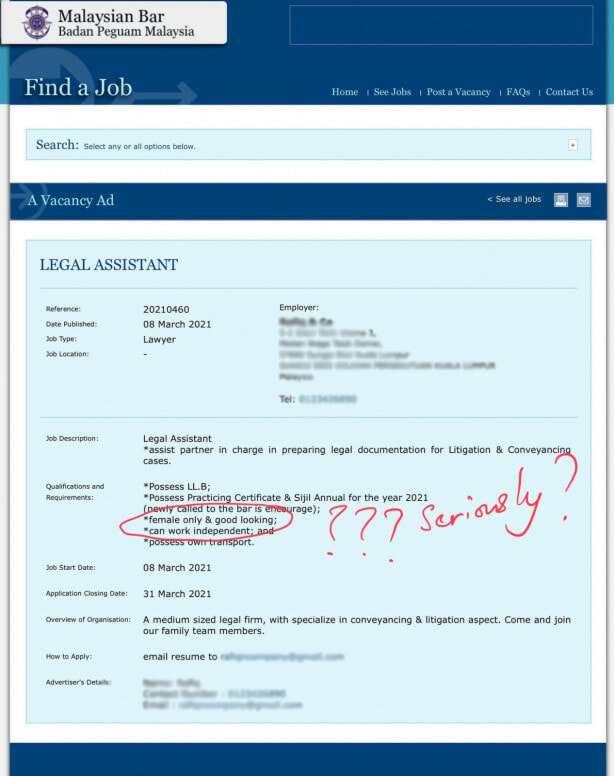 Speaking to WORLD OF BUZZ, Aidil said that he viewed the job posting at around 5.30pm but when he viewed it again later at around 7pm, the “good looking” part had been amended. Unsurprisingly, netizens called out the firm for their sexist job requirement and subsequently “solving the problem” by just removing the part without any apology statement.

Over on Twitter, several Malaysians came forward with their own traumatising experiences with the firm. A user who wishes to remain anonymous said she was interviewed by the firm’s partner four years ago and was presented with multiple inappropriate remarks throughout the interview.

“After the interview he kept texting me, i felt so uncomfortable. I don’t remember what he said because I deleted the convo and then blocked his number. Super gross.”

A woman who submitted her application to the firm shared another disturbing encounter she experienced when one of the partners texted her for an interview and he asked if her house can turn into an office while also asking for her pictures.

“He told me “I would like to see how you look”.  Crazy! Please be extra careful with this guy.”

Another Twitter user who also wishes to remain anonymous shared a job requirement from the same firm posted in 2019 which similarly showed that the candidate had to be attractive.

The Twitter user spoke to WORLD OF BUZZ and said she felt that the requirement was peculiar and ridiculous. However, she added that she spoke to someone in the Bar Council and the ad was then amended to remove the particular criteria.

We reached out to the firm in question, Rafiq & Co, for their side of the story and they clarified that it was an honest mistake on their part.

“The said advertisement was published without the partner’s approval.”

They also added that they have retracted the advertisement and they regret their mistakes.