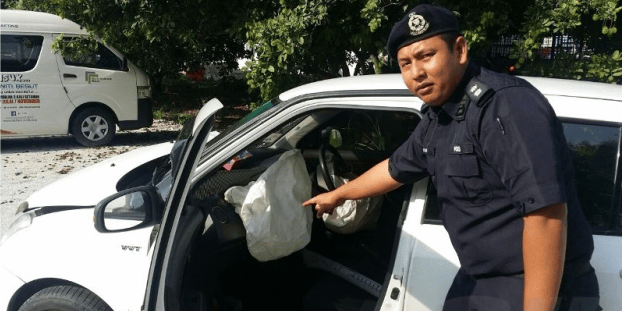 Cars are Malaysians’ go-to mode of transportation, especially when our public transport is not super reliable yet. Yes I’m looking at you RapidKL. However, even with all the safety mechanisms installed in a car, freak accidents are likely to still happen.

Recently, news of a boy of only 4 years old who died from the air bag of a car has shocked netizens in Malaysia.

The victim, Muhammad Syawal Amsyar Mohd Fakhruzi was seated in the front passenger seat while the 30-year old mother sat behind. The family was travelling back from Kampung Raja to Jertih.

Apparently, the son who was being mischievous in the car diverted the father’s attention, causing them to get into an accident which involved 2 other vehicles.

According to a statement made by the district’s chief police,

“The 4-year old boy who was wearing his seat belt got up to stand on the car and was playing around. The 32-year old father then told his son to sit down and in that split second, the father stepped on the brakes because he didn’t realize how close he was to the car in front of him due to the busy traffic.”

“The father braked his car but due to the close proximity, his car hit the Proton Iswara infront of him which resulted that car to hit the Perodua Kelisa in front of that.”

Upon collision, the airbags inflated from both dashboard and steering wheel as a safety mechanism.

However, the sudden impact from the airbags broke the 4-year old boy’s neck.

The unconscious boy was rushed to Hospital Besut but upon arriving at the hospital, he was confirmed to have passed away.

It was reported that the parents and drivers of the 2 other cars did not sustain any injuries.

We were taught to never place a child in the front seat, so please heed this advice everyone.