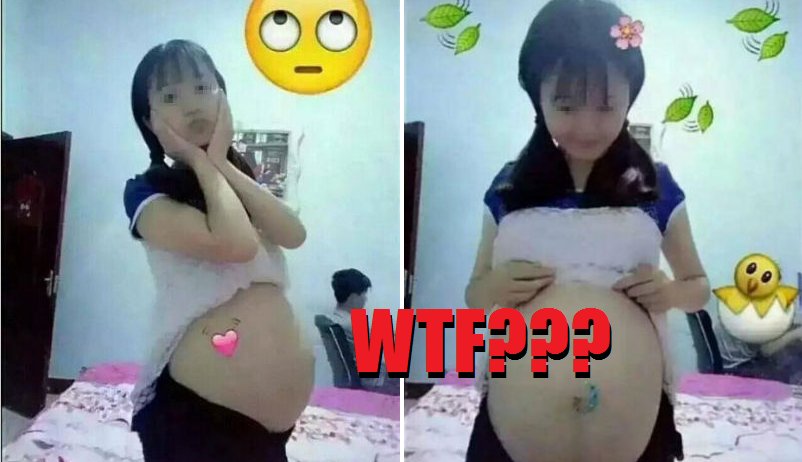 A girl from Henan China has caused quite the frenzy after she delightedly uploaded images of her showing off her big belly.

The baby faced girl who looked like she was only 13 years old took a few shots of her exposed very pregnant belly which surprised the internet.

On her social media, the girl has written that she was born in the year 2000 in her profile. So she’s only 16 this year. She posts plenty of lovey dovey pictures with her boyfriend, which I’m sure we’d all likely say that he was the one who got her pregnant.

According to her profile, she mentions that the boyfriend is only one year older than her!

Netizens who came across her pictures analyzed her images, posts and information. A few conclusions have been made:

a) The baby is apparently a boy, which raises a few eyebrows as Chinese hospitals are not allowed to tell the parents the gender of the child before it is born, so if the child is indeed a boy and the parents know it, they must have resorted to an illegal way to find out.

b) “The name Li Yunxi is an indicator of the educational level of the couple… they watch too many Korean shows.” It turns out that “Yunxi” is a common name for characters in addictive Korean dramas.

c) Even though a 16-year-old giving birth isn’t akin to something illegal as rape, any wedding between the couple at this stage wouldn’t be considered legal or protected by the law as they are still too young by five years. The marriageable age in China is 22 for men and 20 for women.

How lightheartedly the couple is about this serious matter has made people question humanity. To think, kids are having intercourse at the tender young age of 15 and actually getting pregnant. Oh how sad and disappointed the parents must be.

Netizens commented that teenagers below the age of 18 should take care of their own body and not exploit it so accidents like these would happen. Raising a child is not laughing matter and would need proper planning, both emotionally and financially.