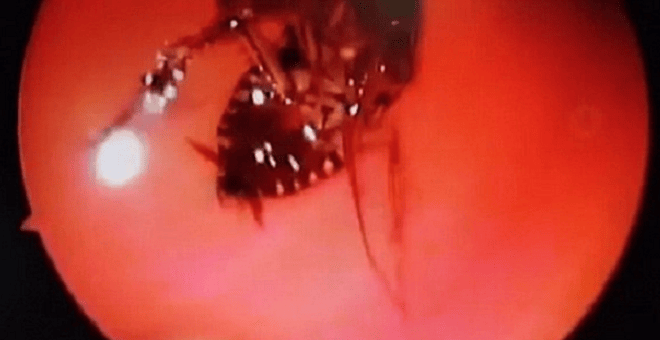 A domestic worker known only as Selvi, living in Chennai, India encountered an experience that is the stuff of nightmares.

Doctors were equally baffled and amazed when they operated on the 42-year-old patient and successfully removed a live cockroach from the depths of her skull.

On Wednesday, she was admitted to the Stanley Medical College Hospital after she complained that she felt “strange” sensations in her nose and eyes. Ewwww!

“I could not explain the feeling but I was sure it was some insect. There was a tingling, crawling sensation. Whenever it moved, it gave me a burning sensation in my eyes. I spent the entire night in discomfort, sitting up and waiting for dawn to go to Stanley hospital after getting the reference of a doctor from my employer,” she said.

When prompted, she remembered that an insect was crawling near her face when she was half asleep. Selvi tried to brush it away but instead it managed to creep into her nostril. She then tried unsuccessfully to blow her nose to get rid of the bug but it climbed further up her nose. NOPE NOPE NOPE!

After performing a nasal endoscopy on her, the doctors found the alarming cause of her discomfort. By that time, the cockroach had already been inside her skull for at least 12 hours!

“This is the first such case I have seen in my three decades of practice,” Dr. Shankar said. They used an apparatus with vacuum suction but the stubborn insect clung onto the tissues.

“It was alive. And it didn’t seem to want to come out. We had to use a combination of suction and forceps to finally pull it out.” Dr. Shankar said.

After 45 minutes, they managed to remove the creepy crawly from Selvi’s skull. And incredibly, it was still alive! Worse, it was no small bugger either!

Dr. Shankar described the situation and said, “It was sitting in the skull base, between the two eyes, close to the brain. If left inside, it would have died before long and the patient would have developed infection which would have spread to the brain.”