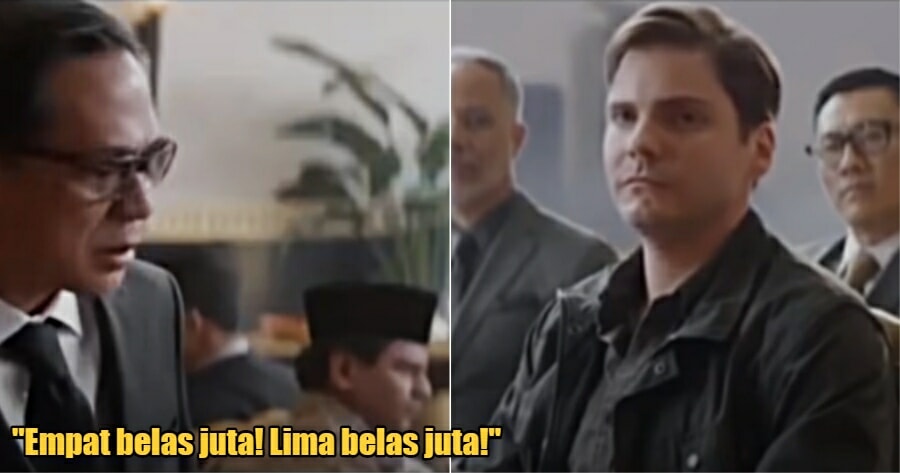 How excited were you guys to hear the Malay language used in Shang-Chi and the Legend of the Ten Rings?

If you haven’t already seen it, in the scene, Awkwafina’s character compliments an extra’s spike-laddened face mask, to which he responds with an enthusiastic ‘terima kasih!‘.

Well, did you know that there would have been more Malay/Indonesian spoken in the Marvel Cinematic Universe (MCU)?

In a sadly deleted scene from Captain America: Civil War (2016), Baron Zemo or Helmut Zemo (Daniel Brühl) attends a private auction in Indonesia to steal the Sokovian Winter Soldier guidebook (the red book with the star).

But, the scene was later replaced by the one (which you’ve seen in the movie) where Zemo tricks his way into a Hydra operative’s home instead.

In the auction scene, the sales were conducted in Bahasa Indonesia though there were also mixes of Bahasa Malaysia in there.

Famous Indonesian actor, Ray Sahetapy plays the auctioneer who shares how he had come about Hydra weapons and artifacts after an ex-Hydra personnel was killed.

“Our next lot did not come to us easily. An ex-Hydra administrator was killed crossing the border into Syria. Weapons, artifacts, advanced equipment, all used by and designed for the fabled… Winter Soldier,” he said in Bahasa Indonesia.

The 1st item up for bidding was a polish Komars weapon and immediately, you can hear bids from the crowd in Malay, “empat belas juta! (14 million!)” and “lima belas juta! (15 million!)“.

Ray’s character spots Zemo and calls him out for being uninvited to the event, to which Zemo insults the guests for over-bidding on an outdated weapon before revealing his true intentions for being there.

Using some sort of chemical airborne poison, he kills everyone at the auction before picking out the Winter Soldier manual from the stack of relics as the scene ends.

And if you look closely, you’ll even spot auction guests wearing songkoks!

Civil War director, Joe Russo later revealed that the scene was deleted because he felt Sahetapy’s stood out more than Zemo did, when instead he wanted to use the scene to hype up Zemo as the main villain of the movie.

Though, we never got to see the scene in the movie, we hope that Marvel will be opened to including more Southeast Asian dialects and characters to their future films!

You can check out the deleted scene here:

Should this deleted scene have been used in Captain America: Civil War instead? Share your thoughts in the comment section.

Also read: He Might Be In A Marvel Movie But Ronny Chieng’s Favourite Superhero Is As Malaysian As It Gets!