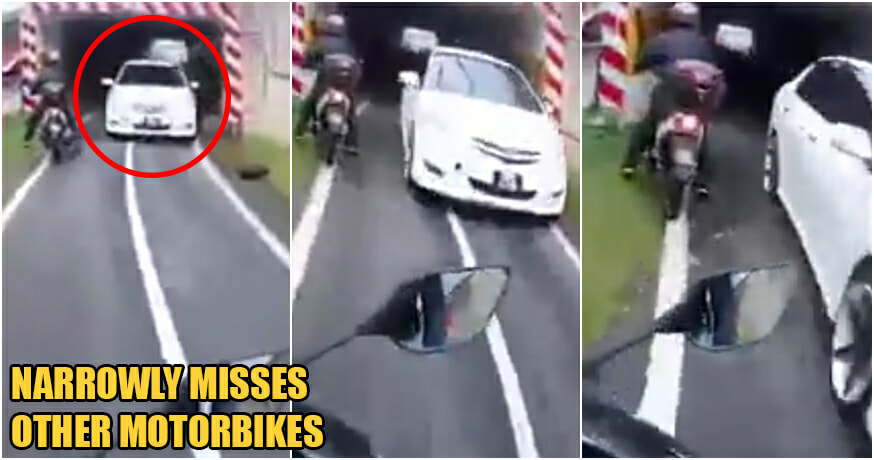 When you’re on the road, it pays to be aware of your surroundings. Not only can you avoid putting yourself in danger, but you can also help keep other motorists safe when behind the wheel. And unfortunately for a Malaysian driver, they had to learn this the hard way after finding themselves in a dangerous situation that could have led to some pretty serious consequences.

In video footage obtained from a motorcyclist just yesterday (21st August 2020), a white Toyota Vios was seen to have somehow made its way onto the designated motorbike lane located along Federal Highway. Dangerously traveling through incredibly narrow paths that have been designed specifically for motorbikes, the sedan narrowly misses other motorcyclists that found their way in its oncoming path.

However for the motorcyclist who was filming the entire incident, he wound up finding himself in a minor collision after attempting to swerve out of the way of the Toyota after it had appeared without warning from inside an underpass.

Barely squeezing through, the sedan then drives off, leaving the motorcyclist stranded after he slams into a concrete wall at low speed, causing him to fall off his motorbike. Thankfully, a fellow motorcyclist who happened to be there at the time of the accident stopped to offer him aid.

Shared through the Info Roadblock JPJ/Polis Facebook group, netizens have urged those who have any information on the car and its owner to report to the relevant authorities for this dangerous misdemeanor, which could have ended with far more devastating consequences.

It should be noted that this isn’t the first time that a car had found its way onto Federal Highway’s motorcycle lane, as the driver of a Volvo SUV had also landed in the same predicament only a couple of months prior. Upon being detained, he claimed that he was led onto the motorcycle lane after accidentally setting his navigation app to ‘motorcycle mode’.

So the next time you’re behind the wheel of your car, be sure to pay attention!