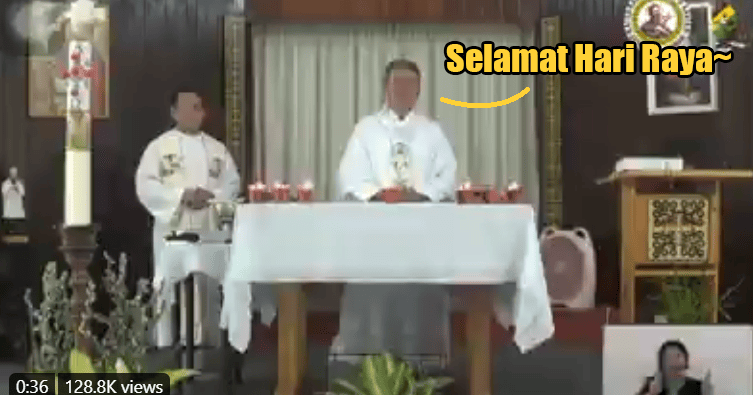 During precarious times like these, the best thing that we can do as Malaysians is to remind ourselves and others of what’s truly important. We must all strive to spread kindness and stay united. It’s the only way to get through this season.

A netizen recently took to Twitter to share a touching video of a priest and church members in Sabah wishing our fellow Muslim brothers and sisters, Selamat Hari Raya, during a live stream service last Sunday (24th March).

**THIS HAPPENED IN SABAH**
Roman Catholic’s priest & church members sang Hari Raya song to muslim friends after today’s sunday mass ended. can you see how peaceful our state is? 😭 pic.twitter.com/EAAGZPY7B0

In the heartwarming video, the priest says, “We want to wish a Happy Hari Raya to our Muslim brothers and sisters in Sabah and the rest of Malaysia. We will now sing the Selamat Hari Raya song”. The video proceeds to show the priest singing joyously while the congregation can be heard joining in the festive song in the background.

The tweet has since gone viral with over 6,000 retweets and 8,900 likes. Since the posting, netizens from West Malaysia responded to the tweet with practices of their own that showed unity and harmony amongst the variety of religions in our country.

One netizen said, “In Kelantan, during our school assemblies, all Muslim and non-Muslims would pray together. The prayers were in Arab but Non-Muslims would sometimes agree with “Amen” to the said prayers.”

Very happy to see this. Keep loving each other guys ✌️

What a peaceful demonstration. What practices have you seen in our country that show peace and harmony amongst the different religions? Let us know your experiences in the comments below!