A Malaysian man who attended the tabligh gathering at Masjid Sri Petaling has been verified as infected with Covid-19. This news made headlines when the Director General of Health, Dr Noor Hisham Abdullah took to his official Facebook page to make a public announcement.

According to his Facebook post, the 60-year-old Malaysian man had been showing symptoms of being infected by the Coronavirus on the 4th of March 2020, after he had attended the gathering. He had been suffering with fever, cough and flu initially. However, on the 8th of March, he had difficulties in breathing and was admitted at Bentong Hospital on the exact same day. 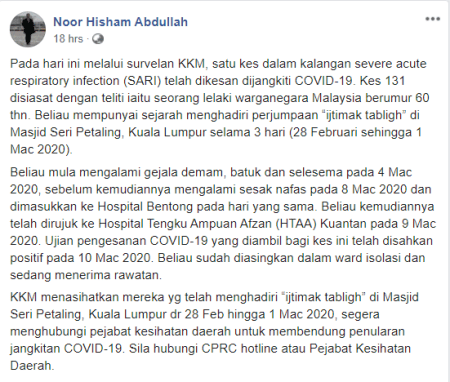 On the 9th of March, the senior citizen was referred to Tengku Ampuan Afzan Hospital (HTAA) for further testing. The next day (10th March), he was confirmed to have been infected with Covid-19. The Director General of Health has assured that the infected patient currently is in isolation and is receiving treatment.

He had also requested those who attended the tabligh gathering from from 28th of February to 1st of March 2020 to immediately contact the district health office, in efforts to curb the spreading of the disease.

According to New Straits Times, yesterday (11th of March), the ministry had revealed that a 53-year-old Brunei citizen, who was present at the gathering was also tested positive for the virus upon returning home. The tabligh gathering is estimated to have involved around 10,000 people from several other countries.

As of Wednesday, Malaysia has recorded a number of 149 Covid-19 cases, of which 26 has recovered and discharged.

What do you think of this article? Share your thoughts down below! 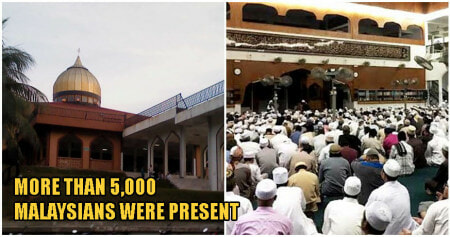