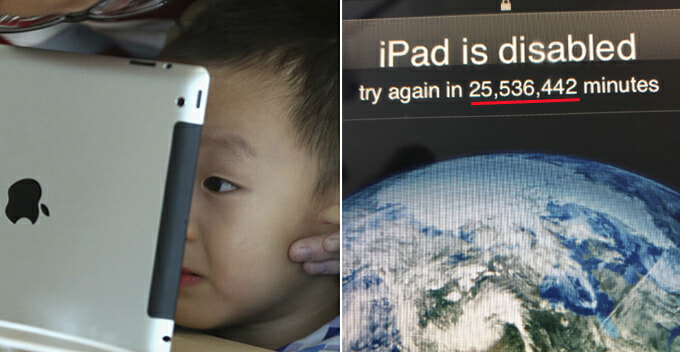 This is the worst nightmare for any iPhone or iPad user!

On 7 April, a concerned father named Evan Osnos shared on Twitter about how his iPad was accidentally locked by his 3-year-old toddler who entered the wrong password repeatedly. Here’s what was showed on Evan’s iPad screen. For non-iPhone users, this is a safety mechanism which automatically disables the device after too many failed login attempts.

If our math is right, the iPad is locked for 25 million minutes, which works out to about 48 years. In other words, the iPad can only be unlocked again sometime in 2067 and the toddler would have been 51 years old by then! Hope he can get the password right that time!

Netizens who saw the post were amused by this incident. Some offered genuine tech advice while other cheeky ones said, “Put it in a bag of rice!” which clearly doesn’t help at all. Another Twitter user suggested Evan to just give his kid the  passcode next time to avoid this from happening again.

Luckily, he was able to turn the situation around after putting the iPad on Device Firmware Update mode, which allows him to restore the device. Phewww…

Although Apple did not respond to the viral thread, its support page does inform consumers what to do in the event that they are locked out from their iOS devices. Here are the general guidelines.

The force restart procedure varies according to different phone models. You can get the full information here.

This is not the first time such an incident has happened. Just last year, a woman’s iPhone was disabled for 47 years, no thanks to her child! You can read the story below. 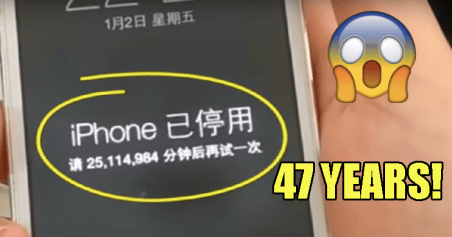