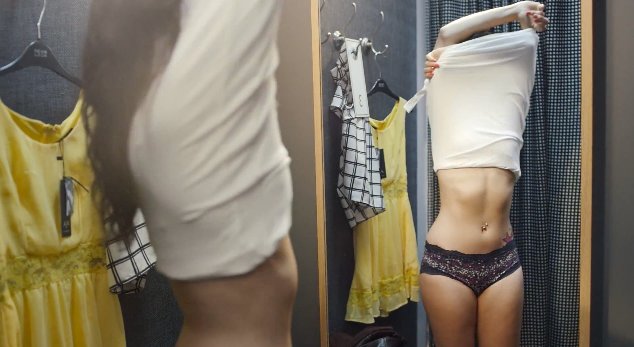 *Featured image does not represent Amanda mentioned in this post

A recent viral Facebook by user Amanda Sabri went viral in our Malaysian feed with over 1,500+ shares in 10 hours.

In her self titled Facebook post, “Parkson (Pavilion) prices a woman’s modesty at only RM1,000” she describes an encounter she had kept to herself, in which, “today the 1st of July 2015, I finally have the courage to speak up.”

Here’s how the story goes:

“On the 1st of May 2015, I, Amanda Sabri was humiliated in the Wallis changing rooms at Parkson, Pavilion. As I was in the midst of trying on one of the items (note: at that moment still undressed), a male salesperson walks into the changing area and flips open the curtain that acts as a door to protect a woman’s modesty.

Was it an accident? No it was not. These changing rooms were not only on an all female section of this department store, but it was also in a section which was sublet to Wallis. The male salesperson who flipped the curtain – he was from Hush Puppies. What was he doing there? Only god knows.

After he left, I was in shock and a million thoughts went through my head. Do I complain? What can they do? Shall I just move on? These things must happen to quite a few people, right? Then it hit me.

One day, something like this could happen to my daughter too. Will I just stand aside, and tell her that its ok for the male salesperson to have a look at her body without clothes on? Will I teach her that its not worth speaking up to a big retailer, because we are worthless? Will women always be victims, but never have the courage to speak up?

NO. I couldn’t take it. So I spoke up… to the male salesperson himself, to the managers on duty, and even to some reps at their head office (mix of men and women).

But… nothing happened. Other than a million “We are sorry” coming from their Management, there has been nothing else. Nothing else that I feel was enough to prove that they too felt that the act was not acceptable.

They did however offer me a RM1,000 Parkson Giftcard, which I declined.

Parkson prices a woman’s modesty at only RM1,000… when they have 2 whole floors dedicated to women’s apparel alone. What a joke.

That incident has scarred me. Since then, I have made an active effort to not purchase or try on clothes from stores which have male attendants. I’m not all that pious, but if I am scarred… (and I would say that I’m a pretty tough cookie) then imagine all the other ladies who have experienced the same.

I hope this post gets more women to feel brave, and gives them courage to speak up. It starts with a guy ‘accidentally’ opening a changing room door, then he will accidentally rape you too.”

Since her post, readers wrote positive feedback which offered her sympathy and thanked her for writing her post that courageously speaks up for a women’s right. 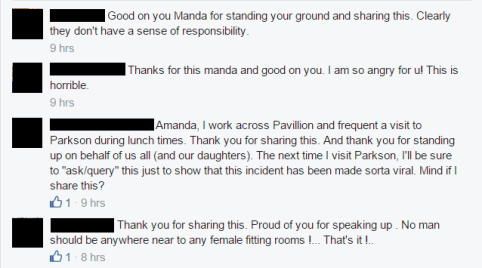