Most girls would definitely know the pain of donning a pair of sky-high heels for a night out or for special occasions.

It is a widely known fact that high heels are not good for your feet but hey! They just look so good! Wearing them does wonders for your legs and makes your booty look like a dream.

But for 37-year-old Lorraine Burnett from Dunfermline, Scotland, wearing high heels for a night out about town brought more dire consequences than just sore feet.

She lost her leg after she wore her 5-inch stilettos to party in Christmas 2008. Although the shoes were causing her pain and discomfort, she persisted in wearing them through the night.

The pain us women endure for beauty!

After a night of partying, Burnett got home and found that she had a bad blister on her left foot. Doesn’t seem like a big deal, right? Wrong. As she was a carer, she knew how to take care of her wound and went about her daily business as usual.

However, after one week, the blister became so painful that Burnett had to visit the doctor who prescribed her with antibiotics. The medicine didn’t help and the blister continued to affect her ability to walk normally and also her work performance.

Over the course of the next two years, the blister got infected repeatedly and doctors had no choice but to advise Burnett to amputate her lower leg. She made this decision after the doctors performed a debridement by removing the infected skin but she would still be plagued by recurring infections. 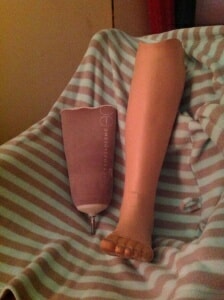 In November 2010, Burnett went through a surgery that lasted for five hours to amputate her lower leg and now has to rely on a standard prosthetic leg.

According to Burnett, she is devastated that her heels ultimately cost her to lose her lower leg. Her life has also changed completely, she was once sociable and outgoing, but now has to remain homebound most of the time.

A factor that may have contributed to her unfortunate condition is that Burnett is a Type 2 diabetes sufferer. Generally, Type 2 diabetes causes patients to experience poor blood circulation and nerve damage, which may lead to slower recovery time for wounds and ulcers. Burnett has opened a GoFundMe page to get a more realistic looking leg that can enable her to feel like herself again and give her new life.

Ladies, don’t say we didn’t warn you. Always put your health first instead of your appearance. As the saying goes, “Prevention is better than cure,” so if anything seems off, head to the doctor straight away! Guys, tell the beautiful ladies you know that comfort and health is more important than looking pretty.