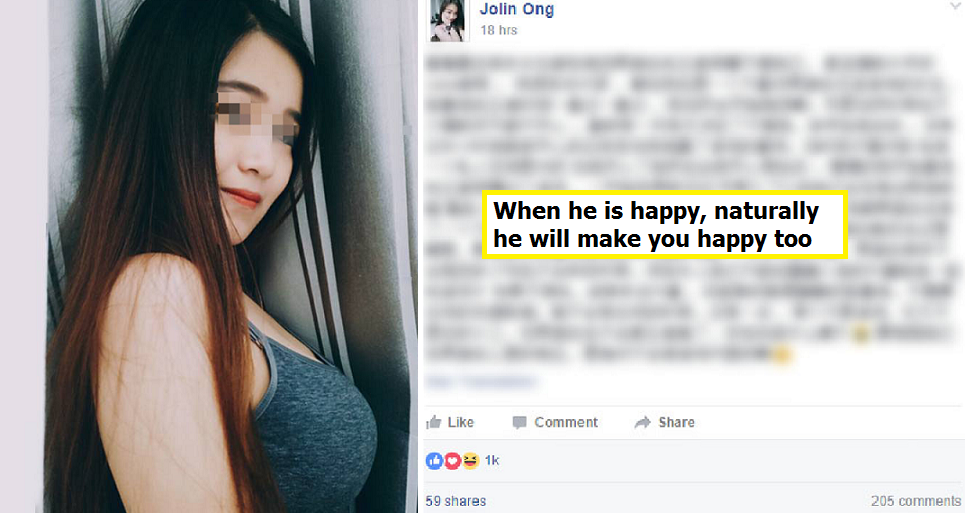 Sometimes we may have disagreements and miscommunication with our partners. This is usually caused by conflicting interests.

One prime example would be gaming. Most guys love playing games – be it on a computer, a console or even on their phones. And unfortunately, many women just do not see the fun in those games.

But one particular girl stood up and gave a sound advice to all the ladies out there. Jolin Ong wrote on a Facebook post,

“Recently, I noticed many girls complaining about their boyfriends playing games and ignoring them. Some cases even end in a break up.

“I would like to tell you that once upon a time, I too did not like a boyfriend who was addicted to games, especially when he is with his girlfriend.

She admits how she also used to complain a lot which eventually leads to fighting, and then only causing both parties to be unhappy.

“Until one day, I decided to just let him play. Not more than half an hour later he joyfully told me he won the game.

“And that was when I realised I should give him some space. When he is happy, naturally he will make you happy too.”

She shares how she started to support her boyfriend when he’s gaming.

“Unknowingly, I too became interested in it and ended up downloading the game.

“Now, when I want my boyfriend to go anywhere with me, to watch those movies he finds boring, or to go shopping, he will not complain and will not argue.

“But if you are just not interested in gaming, then you can at least quietly accompany him as he plays. Do not complain and there will be no quarreling.

“Also, it is just a game and not a mistress. Your boyfriend will not run away with the game, so what are you all tripping about?”

“Trust that your boyfriend has you in his heart. You will definitely not be replaced by a game.”

This is one smart woman eh? In the end, relationships are all about compromising. If you want your partner to do things with you which they do not enjoy, then you should do the same for them too.

And of course, gaming will only be so much better when you have BIG amount of data to use! I mean if you’re someone who likes it BIG, check out these awesome data plans that you just can’t miss here!

After all, there is the saying ‘a couple who games together, stays together’!