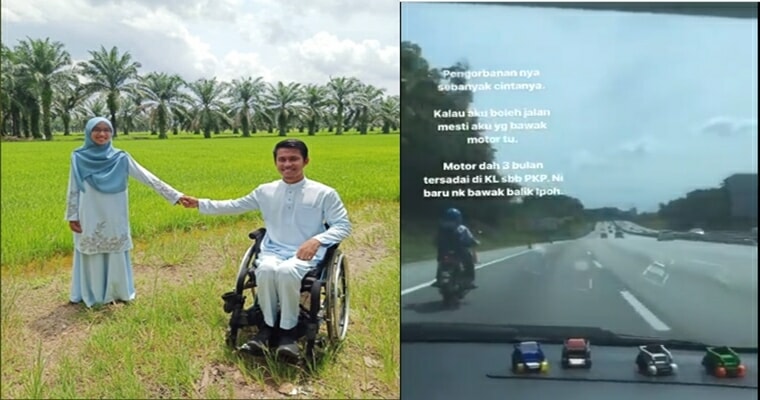 The old saying goes that love knows no boundaries and for some people, they are truly willing to go the extra mile for the sake of their significant other. In this case, quite literally!

Not too long ago, Malaysian netizen Firdaus Ibrahim,who is disabled, shared the lengths his wife went through to help him out after the couple had to move all the way from Kuala Lumpur to Ipoh. What makes this feat all the more incredible is that instead of enjoying the journey with her husband in their car, she offered to ride their motorbike all the way from one state to the other because he couldn’t do it himself due to his disability!

What do I deserve to have her in my life. pic.twitter.com/jhdQ0FvW75

This was due to the fact that the couple did not want to leave their motorbike in Kuala Lumpur, which had been stranded in their old home for the last 3 months during the MCO period.

So to make sure they could bring it with them to their new place, she offered to ride the motorbike all the way from KL to Ipoh! In fact, she even mentioned that this wasn’t a big deal, as she was used to riding motorbikes for long periods of time back in university.

Throughout the journey, the netizen, who also goes by Firdaus, would never be too far behind in their car to make sure that she was safe.

“If I could walk, I would rather ride the motorbike myself and have her drive.”

“Her sarcrifice is as much as her love for me.”

The Tweet, which has since caught the attention of Malaysian netizens all over, has garnered plenty of praise for the sacrifice that his wife was willing to make for them both, while reminding him that he should cherish such an incredible woman.

The video on Twitter has received more than 30k likes and 23k retweets.

To Mr Firdaus, we have to say that you are indeed a very lucky man to have found such an incredible wife! We wish you both nothing but happiness in the years to come.

Also Read: Hilarious Video Shows Man Getting Swooped Off His Feet & Carried Away After Knocking Motorcycle 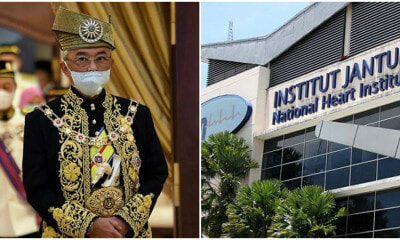 JUST IN: Agong Admitted To IJN, Undergoing Treatment Since Monday

The Yang di-Pertuan Agong is currently undergoing treatment at the National Heart Institute (IJN). Following reports from Astro Awani, His...