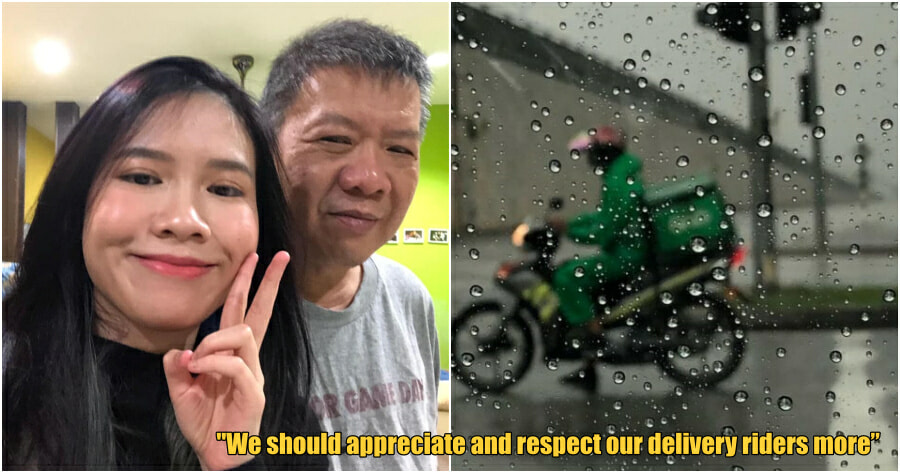 “It doesn’t cost anything extra to be nice to people.”

Although a few states have moved into the recovery phase, most states in Malaysia are still under lockdown. Perlis, Labuan and Sarawak who have moved into Phase Three of the National Recovery Plan have been allowed to dine in at restaurants and stalls.

Meanwhile, most of us are still stuck tapauing or ordering our food via food delivery services. But when was the last you said something nice to your delivery rider?

On 7 August, Esther Erin wrote a post sharing her thoughts and called for Malaysians to appreciate and have more respect for our food delivery riders. 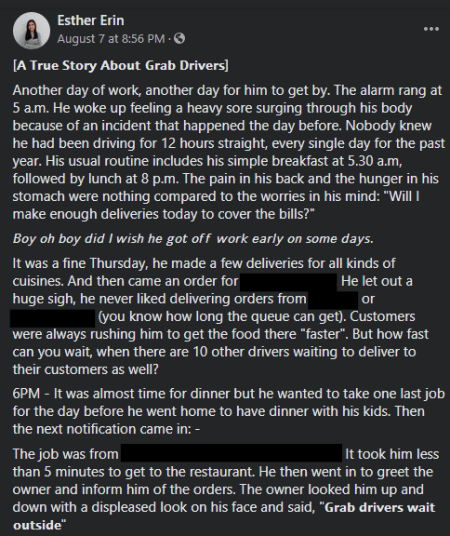 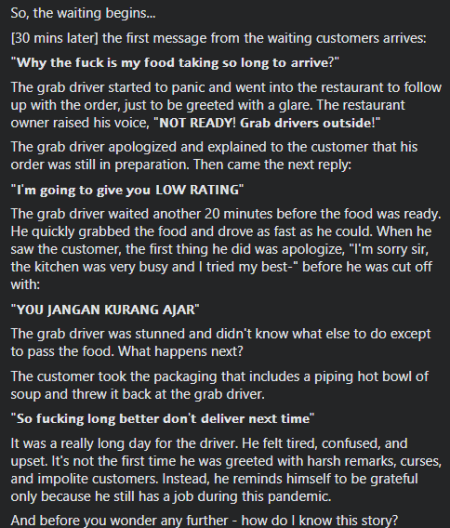 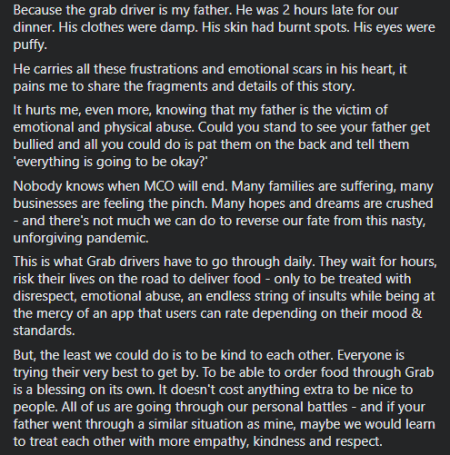 The post which was titled ‘A True Story About Grab Drivers‘ was based upon her father’s experience as a food delivery rider and the struggles that he often faced.

Esther who penned the post through the perspective of her father, said “nobody knew he had been driving for 12 hours straight, every single day for the past year. The pain in his back and the hunger in his stomach were nothing compared to the worries in his mind: “Will I make enough deliveries today to cover the bills?”

“It was almost time for dinner but he wanted to take one last job for the day before he went home to have dinner with his kids. Then the next notification came in. He then went in to greet the owner of the restaurant and inform him of the orders.”

“The owner looked him up and down with a displeased look on his face and told him that Grab drivers wait outside.”

To make matters worse, after waiting for over 30 minutes, the customer then messaged her father saying, “why the f*ck is my food taking so long to arrive?” The customer then proceeded to threaten to give him a low rating. 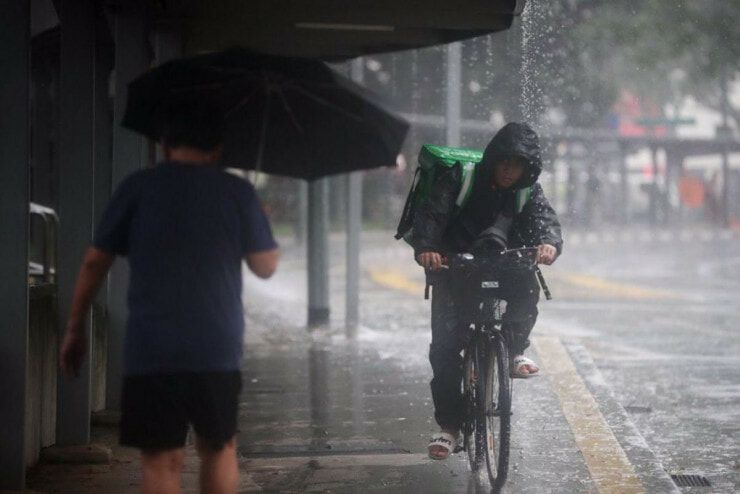 After picking up the food and going to deliver it, upon arrival her father quickly apologised to the customer for the delay and said, “I’m sorry sir, the kitchen was very busy and I tried my best” before he was then cut off by the customer who said, “You jangan kurang ajar!” (You don’t be disrespectful).

This left him stunned and he went on to hand the food over to the customer who showed their displeasure by taking the packaging which contained a piping hot bowl of soup and proceeded to throw it at him.

Esther explained in her post that this was not the first time he was greeted with harsh remarks, curses and impolite customers. “He carries all these frustrations and emotional scars in his heart and it pains me to share the fragments and details of this story. It hurts me, even more, knowing that my father is a victim of emotional and physical abuse,” she said.

“He felt tired, confused and upset. He was two hours late for our dinner. His skin had burnt spots. His eyes were puffy”

She said this is the reality that food delivery riders go through every day as they wait for hours and risk their lives on the road to deliver food, only to be greeted with disrespect, emotional abuse and an endless string of insults. 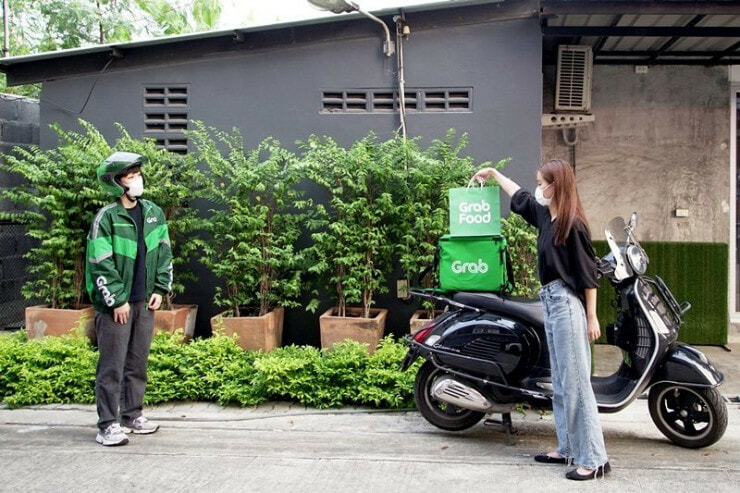 She called for Malaysians to be kinder to one another as everyone is merely trying to get by. “To be able to order food through Grab is a blessing on its own. It doesn’t cost anything extra to be nice to people,” she added.

“All of us are going through our personal battles – and if your father went through a similar situation as mine did, maybe we would learn to treat each other with more empathy, kindness and respect.”

Public appreciation and respect is critical

Esther also clarified via a series of Instagram Stories that although the incident involving her dad happened a few months ago, she was recently reminded of it hence why she decided to share her story.

“This post is not for my family to get compensated. Nor is it intended to call anyone out,” she said.

“One thing I would like out of this post, is to remind everyone to appreciate and respect our delivery riders more” 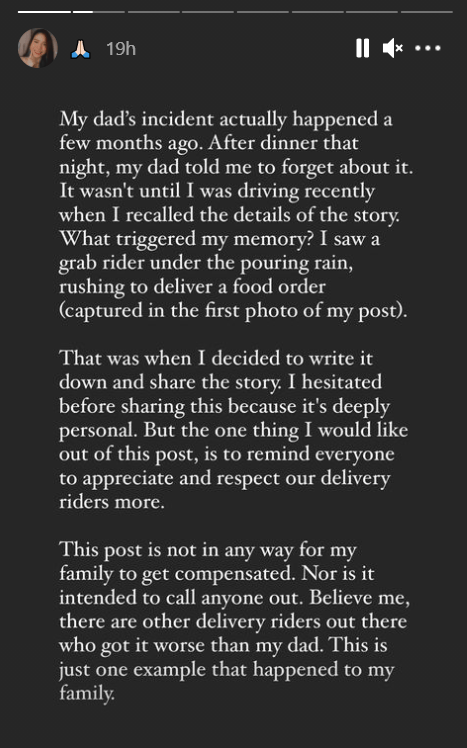 She said that her intention of sharing the post was to remind others to be kind to everyone. “When the pandemic is over, I hope that we all continue to be kind,” she added.

She pointed out that it’s important that we do not start pointing fingers at one another, but instead try to understand that a little bit of kindness goes a long way. 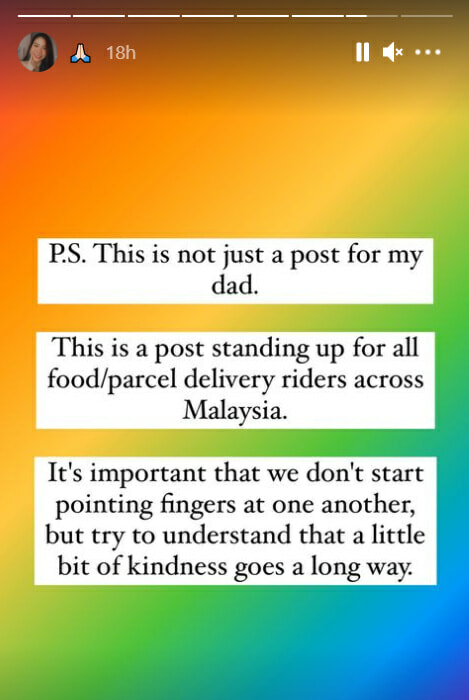 She also explained that Grab has reached out to her for clarification.

Speaking to WORLD OF BUZZ, Grab has asked her to file a formal complaint and make a police report as well and assured that they will take action after investigation.

A representative said, “riders and drivers can also report incidents and we will investigate and take action on these behaviours to protect our riders and drivers. They can also make reports to get medical claims since they are protected by insurance from Grab.”

Esther’s post has gained over 4,000 likes and 2,300 shares with comments of support from netizens.

[𝗔 𝗧𝗿𝘂𝗲 𝗦𝘁𝗼𝗿𝘆 𝗔𝗯𝗼𝘂𝘁 𝗚𝗿𝗮𝗯 𝗗𝗿𝗶𝘃𝗲𝗿𝘀]Another day of work, another day for him to get by. The alarm rang at 5 a.m. He woke…

Let us show our appreciation and respect to our food delivery riders who have been working tirelessly to ensure that we can enjoy our favourite meals in the comfort and safety of our own homes.

Also read: “Malaysia owes you an apology” M’sian Tells Locals To Support Athletes Instead Of Criticising Them 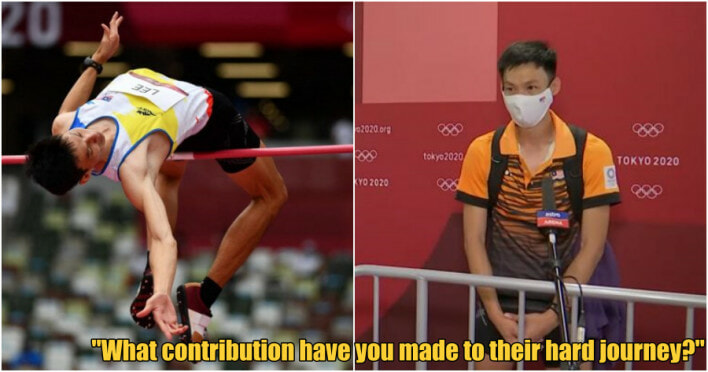