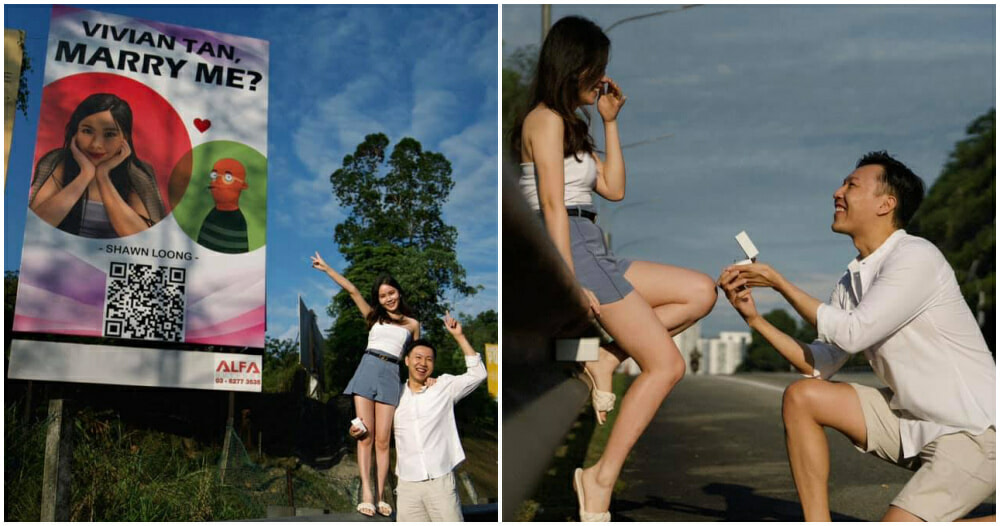 Wedding proposals are momentous occasions as it marks the very beginning of a couple’s new chapter in life. Hence, every bit of thought and effort has to be carefully done and thoroughly planned, before it is executed.

Recently, Malaysian Shawn Loong, took the game to a whole new level by proposing to his partner, Vivian Koon, through a billboard on the DUKE highway! 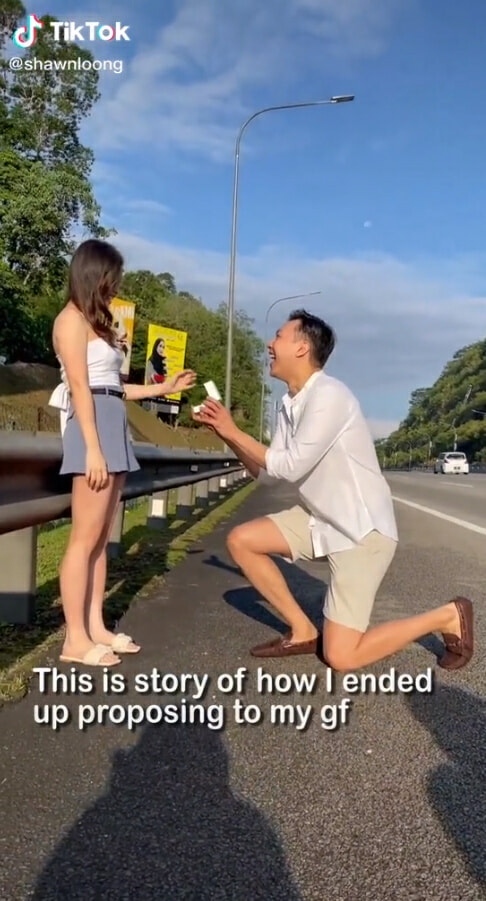 Vivian first took to her Facebook to announce her engagement while sharing pictures of the unique and touching proposal. Her post had garnered over 930 shares.

She explained that a few weeks ago, her partner Shawn, proposed to her through a billboard instead of a typical proposal in a room filled with flowers or balloons. She added that the QR code on the billboard was filled with another surprise! 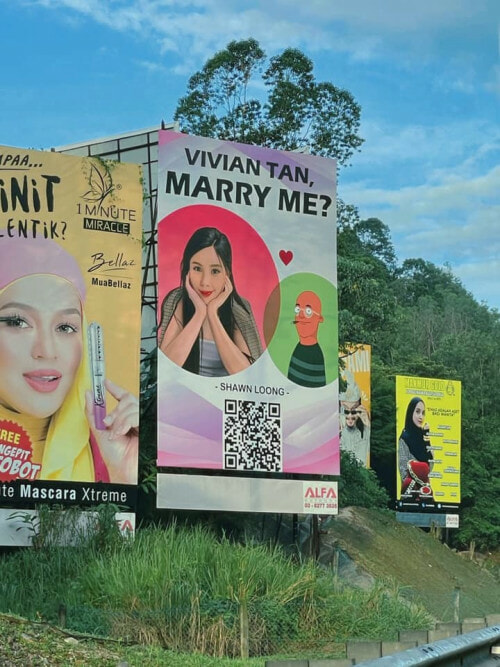 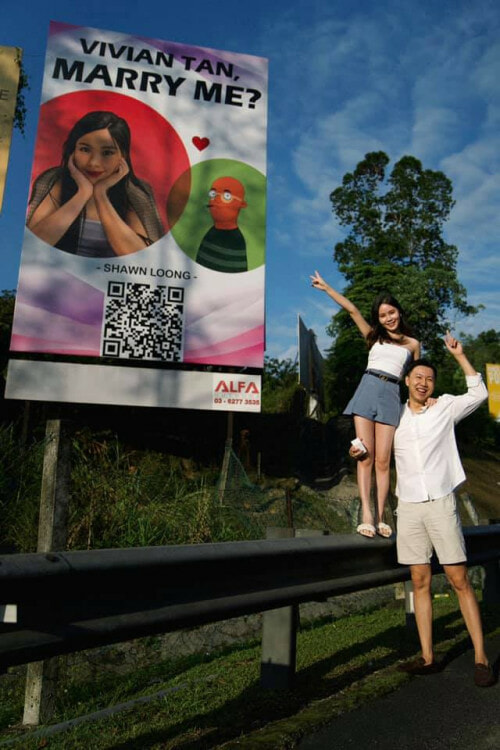 She then said that:

“This proposal is truly one of a kind! The QR code leads to an NFT Gallery that my fiancé created for me, using our photos together as well as the NFT art he bought for me which look like me.”

In a separate post, Vivian went into detail about the rest of the proposal that was thoughtfully planned out by Shawn.

According to her, right after being proposed through the billboard by the highway, her fiancé had brought her to another spot for a picnic where he proposed once more with the presence of their family and friends. 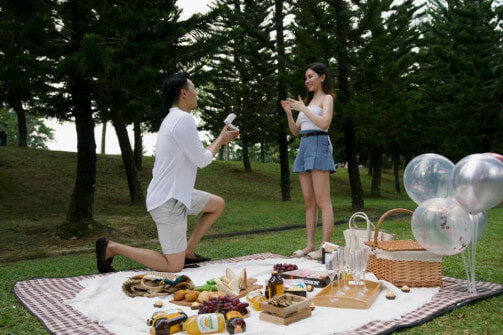 “After the billboard proposal, he also prepared another surprise for me – Picnic Proposal!” she said. 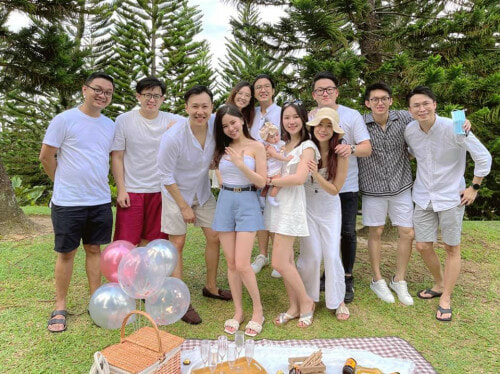 She added saying, “I told him I don’t need a diamond solitaire ring. It’s expensive and I probably don’t dare to wear it daily, and on top of that, my fingers are short and fat, solitaire doesn’t look nice on my hand.”

“So instead, he proposed to me with his entire NFT digital wallet which is worth 12 Ethereum.”

“NFTs are the new diamonds”

Speaking to WORLD OF BUZZ, Shawn explained the idea and intention behind his proposal.

“For starters, Vivian didn’t actually feel an engagement ring was necessary or at least something she could see herself wearing every day. So we agreed that wedding bands were good enough.”

“But I thought that it would still be nice to do something special for her and since we both have similar interests in NFTs, I really just thought ‘what if I proposed using my NFTs instead?’ As a replacement since she felt an engagement ring wasn’t necessary.” 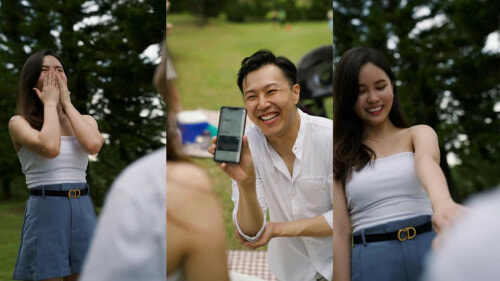 A marketer by profession, Shawn had always been fascinated by how people perceive something as “valuable”. Hence, through this proposal, he questioned “why are diamonds so valuable?”.

“It turns out, in the past, there wasn’t any demand for diamonds until a very successful marketing campaign came about that tied marriage and diamonds together and the rest was history,” he explained. 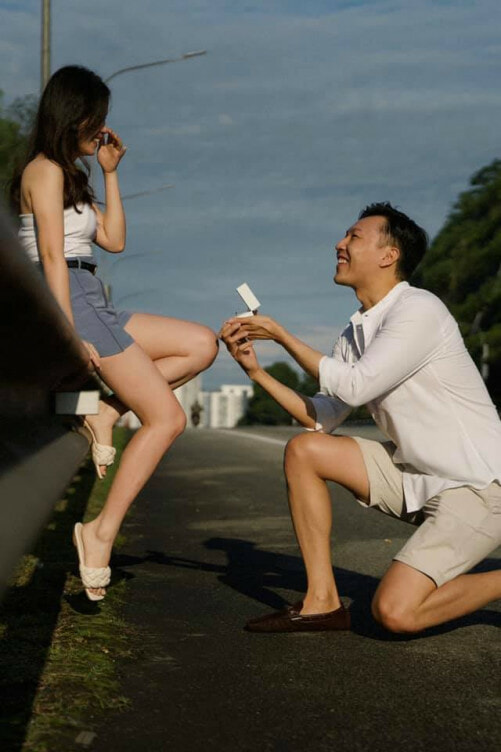 “Arguably, diamonds are intrinsically worthless and no one really buys second hand diamonds anyway. That got me thinking about NFTs the same way, it’s basically just jpeg images, you can consider it worthless just like diamonds… but both have a market for it,” he added.

“But NFTs are extra special because there is a chance that it can grow in value, you can be part of an engaging community and at the very least still sell off if you don’t want it. That’s one thing diamonds can’t do.”

He added that as for the billboard proposal, he thought it would be “cool to merge of old-school marketing with futuristic tech”. 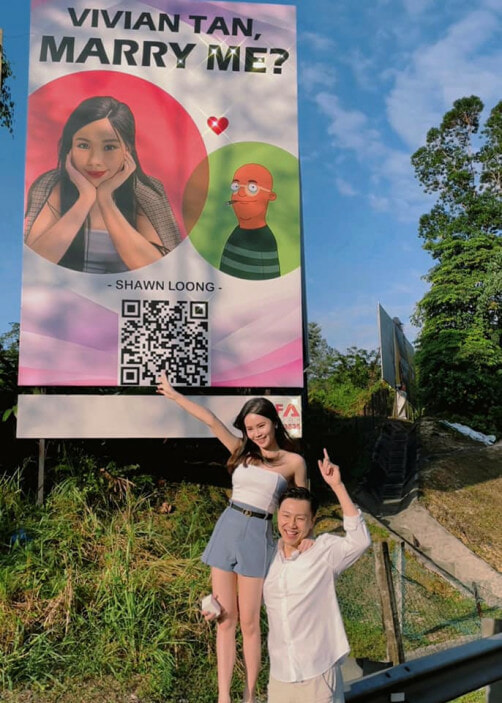 Addressing some of the concerns they have gotten from the public that proposing on a highway is dangerous, Shawn said:

“Although this is a creative idea, we do not encourage anyone to do the same thing. We stopped by to have a look at the billboard before proceeding to the actual proposal at Putrajaya’s Taman Saujana Hijau where there was a surprise proposal picnic with Vivian’s friend.”

Congratulation to Shawn and Vivian!

The billboard is still currently still up! So, if you find yourself on DUKE North-South Express, don’t forget to catch it while you can!

Watch how Shawn did it here.

What are your thoughts on the proposal? Let us know in the comment section below! 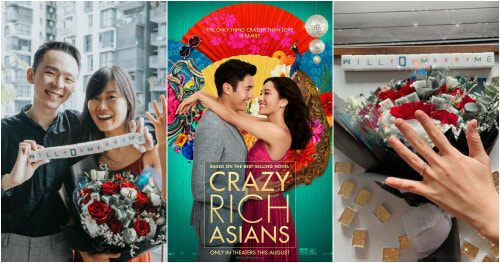