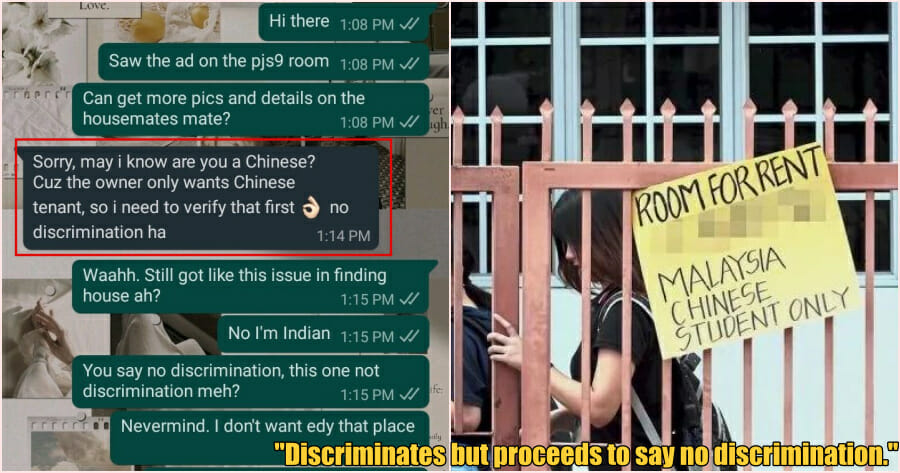 Racism is a concept that still exists in Malaysia and has disallowed certain races to able to find somewhere to rent and even to get food. Unfortunately the trend of racist property owners is here to stay, no matter the number of advocacy tactics and campaigns which were done in the past.

Recently, one such incident was shared on social media platform, Twitter. The Malaysian Indian, who only wants to be known as ZG took to Twitter to express their disappointment as their search for a new place to stay was cut short by a racist property owner.

In their Twitter post, ZG said, “I’m tired of this s*it!” followed by a screenshot between them and a property agent. 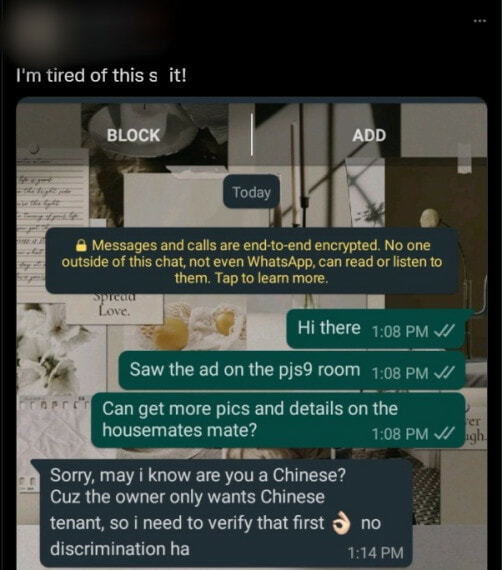 In the screenshot of a conversation between ZG and a property agent, ZG was enquiring regarding a room in Petaling Jaya. Prior to saying anything else, the property agent asked whether or not ZG is Chinese.

“The owner only wants Chinese, so I need to verify that first. No discrimination ha.”

Unsurprisingly, ZG responded in anger, shock and told the agent that they are Indian. “You say no discrimination. Isn’t this discrimination?” ZG asked. 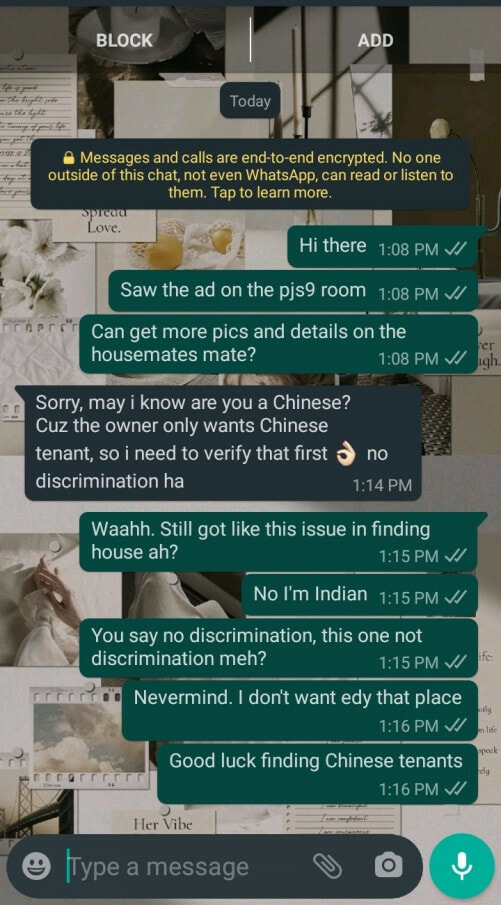 ZG told WORLD OF BUZZ that the incident happened three days ago as they were actively looking for a place to stay upon getting a job after just finishing up their degree. “As someone who is still very new to Kuala Lumpur I was merely looking for more information in terms of pricing and housemates,” they said.

They then explained that they had seen the advertisement on Facebook and thought that it offered a reasonable price and zero deposit. “However it never stated that it is only for Chinese tenants and I would have never bothered to ask if it was written,” they added.

ZG then mentioned that their initial reaction was frustration as it was discrimination purely based on race. “Some agents really down on us when hiring tenants. I chose to share it on Twitter but did not expect it to blow up. This is when I realised that I was not the only one who has faced this,” they said.

Their post on Twitter has garnered plenty of attention and has over 4,500 shares and almost 9,000 likes. Many netizens also condemned this practice and how it has not changed and some users shared their similar experiences.

Users also pointed out how ridiculous it is for the agent to clearly discriminate then proceed to say no discrimination.

The post even caught the attention of Bangi MP Dr Ong Kian Ming who asked, “Should the proposed Residency Tenancy Act (RTA) be used to address such practices? How can it be enforced effectively and fairly?”

Perhaps a permanent solution should be worked on as soon as possible in order to prevent more and more such blatant incidences of racism to continue occurring in the future.

Have you experienced any similar sort of situations? Let us know in the comments.

Also read: “They become unavailable after I state my race” M’sian Frustrated Over Unending Racism In Property Market 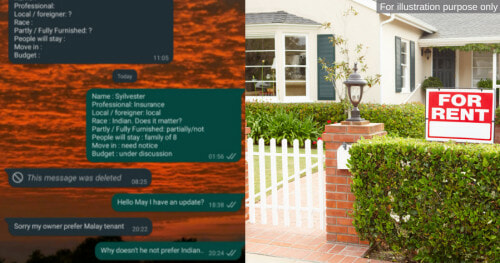