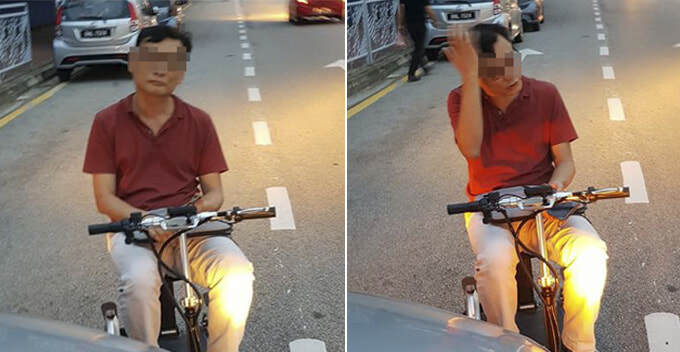 We’ve all seen videos on social media showing how scammers in China fake road injuries just to get compensation from the drivers, and how hilarious they look when they kena kantoi. However, little did we know that this similar scam has actually reached our shores!

Just yesterday (10 July), a netizen surnamed Ng took to Facebook to warn everyone about how a man on an electric scooter tried to fake an accident and scam money out of him. He added that the guy’s modus operandi was very similar to the ones seen in China.

“He came from the wrong side of the road but I managed to stop in time. He came and touched my car, got up (from the scooter) and laid on the road.

“As soon as I told him I have a dash-cam on board (which isn’t true), he immediately jumped up and sat back on his electric scooter. He then claimed to be handicapped.”

Ng also uploaded a video of him and the guy conversing in Cantonese. Apparently the scammer claimed that he felt dizzy after the ‘accident’ and may have suffered internal organ damage, but not a single drop of blood was seen in the video.

Ng then emphasised in the video that the guy was riding his scooter against traffic and even encouraged the scammer to continue acting.

As expected, the post went viral and was shared over 7,000 times overnight. Netizens weren’t amused by the scammer’s performance at all. Many urged Ng to lodge a police report so that action could be taken before the culture starts spreading, while others jokingly said they would teach him a lesson if they ever bumped into him.

So guys, if you frequent SS2 a lot, please be more vigilant when driving and be on the lookout for this guy for obvious reasons. 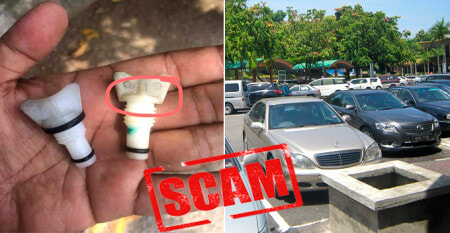