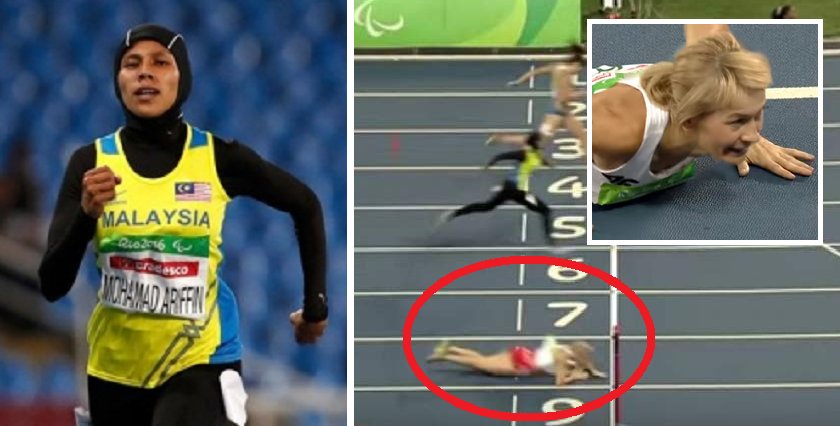 The Paralympics have been good to Malaysia, we won our first gold medals this year in Rio and have produced real tear-jerkers, however, in the women’s 400m finals for the T20 category (intellectual disability), we lost out on the bronze medal in a manner that caused outrage among netizens!

Siti Noor Iasah Mohamad Ariffin, from Boleh-land looked like a shoo-in for third place, but world record holder Barbara Niewiedzial from Poland fell forward at the last minute, snatching bronze away by a hair (literally).

Naturally, our beloved athletics chief coach, R. Jaganathan objected on behalf of the athlete. However, the verdict proved to be a disappointing one as it was rejected by the jurors.

The outcome was determined with a “photo finish” which shows the Pole (not a joke, that’s legit how you refer to someone from Poland) crossing the finish line just a fraction of a second ahead of Siti Noor Iasah (geddit?).

And yes guys, we know this is a legit strategy athletes have used in the past and will continue to use in the future (otherwise her win wouldn’t have been accepted by the jurors), so calm your tits.

Despite her loss, Iasah remains respectful of the juror’s decision and has stated that she is satisfied with her performance, noting her lead over Niewiedzial within the first 200m. She was, as she puts it, unaware of her opponent’s “strategy”.

“I’ve done the best that I could and I’m satisfied. I was ahead of her (Niewiedzial) for the first 200 metres and I still had energy to sprint towards the finish line for the last 100 metres.

“I successfully surpassed her but I didn’t know her strategy… She was already behind me. I suppose every one has their tactics, everyone could do it.

“As for me, I’m happy with myself. Winning should be done justly and not with foolish actions that can hurt one’s self”

You go, girl for being a good sport!

She goes on to thank everyone for their positive support, especially her husband and her family, without forgetting the rakyat also! What can we say, 2016 is an Olympian of a year for the country! Iasah, your sporting behavior coupled with your integrity makes you a champion and a hero to the country!

Also, catch her race here where she was sneakily surpassed by Polish runner Niewiedzial: