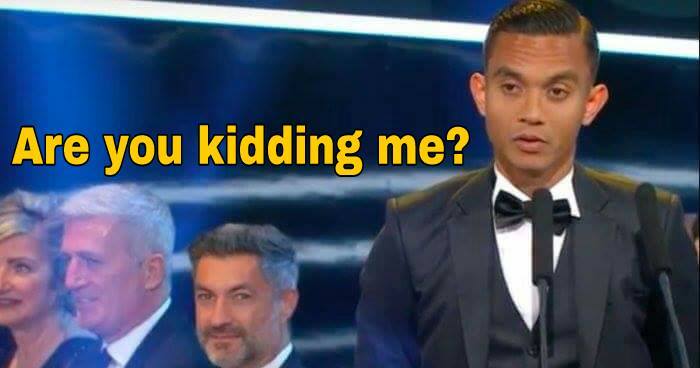 Faiz Subri definitely made the nation proud after winning the prestigious FIFA Puskas Award this week. Not only was he the first Malaysian to win this amazing award, he was the first ASIAN to do so too! 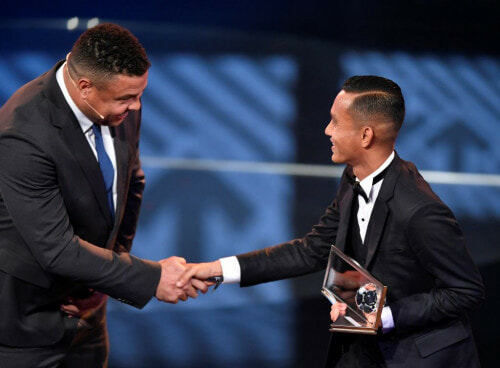 However, it seems like trolls just can’t get enough of trying to put him down. Many netizens swarmed onto social media to downplay Faiz’s win.

They questioned why he didn’t wear the Baju Melayu, why didn’t he speak in Malay during his acceptance speech, and one girl even accused Faiz of wearing a cross!

But the most unbelievable thing happened when a journalist from a local news portal slammed Faiz’s ‘broken English’ during his speech. 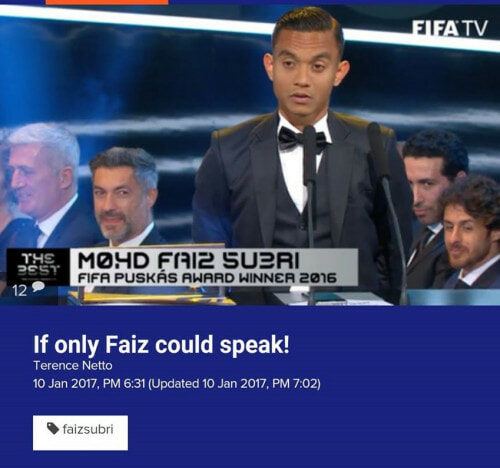 “Fifa Puskas award winner Faiz’s embarrassing search for and halting delivery of the digital text of his acceptance speech in Zurich last night were sad commentaries on the state of English proficiency in the country.”

“If they (Malaysians) watched the footage of his moment in the spotlight, whatever pride they must have felt over Faiz being chosen as winner would have been diminished by his shambling performance on being called to receive the prize and say a few words.”

I think all Malaysians were proud of him, dude.

Then the journalist went on to explain that if Faiz had had better English, Malaysians wouldn’t have felt so utterly embarrassed.

“Malaysians watching the Fifa awards ceremony would have been spared the squirming embarrassment of watching a shambling performance by the English-deprived Faiz.”

Of course netizens were pissed off at his uncalled-for degradation. One very angry Joe Najib decided to write a retaliation which of course went viral as Malaysians echoed his sentiments.

“When an unknown writer by the name of Terence criticized Faiz Subri for his broken English when he delivered his speech, I felt somewhat obligated to write this.”

“Some of Malaysia’s greatest achievers on the global stage don’t have a strong command of the language. Even our living legend Datuk Lee Chong Wei speaks neither English nor Bahasa Malaysia fluently. ‘Cukup makan’ we say.”

“But you know what? No one criticised him. Why is that? Because he let his wins and achievements do the talking.”

“Every drop of sweat that trickled down his chin on to the court is worth more than any English or BM word we know that he doesn’t.”

“The same with Faiz Subri. Half a year ago, nobody knew who this man was. He became an overnight sensation, propelled into the global spotlight with that physics-defying free-kick.”

“And last night, he, like DLCW and many other home-grown sports personalities before him, made Malaysia proud, by bagging an award that is not only a first for Malaysia, but a first for all of Asia as well.” 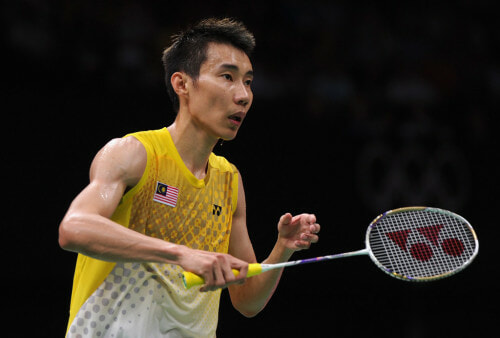 “And quite possibly, no one else from this part of the world will ever win it again. Quite possibly.”

“So Terence, what has your flawless command of the English language brought you other than your monthly paycheck, to sit behind a keyboard and write toilet-paper-worthy articles such as this?”

“I won’t even go to the extent of asking what have YOU done to make this country proud. Heck, I don’t even think your own neighbours know your name lah.”

What do you think? Did Malaysians really felt embarrassed by Faiz’s broken English, or was the guy just making a big hoo-ha?