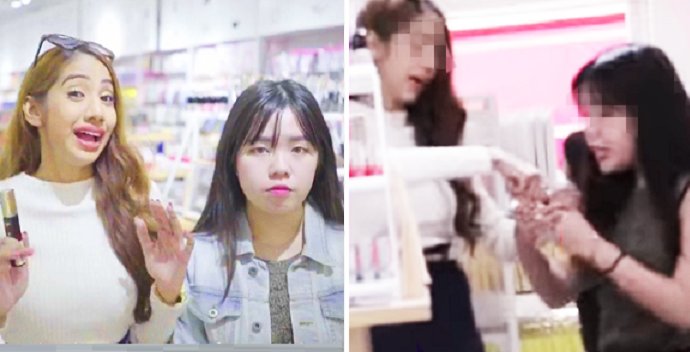 Just recently, a video of two girls getting into a fight over ONE mascara has been circulating on social media after Facebook user Ashley Tan posted it to Facebook. I mean, how can it not right? It’s ONE makeup item!

I guess they really love their makeup!

As a brief recap, the video shows two girls arguing and eventually struggling to pry each other’s hands off the mascara they so desperately wanted. Almost like a battle to the deaths! OVER MAKE UP!

However, just as things seem to be getting more dramatic, the video abruptly cuts off. A bit potong lah. How do we find out who won the mascara now?

Netizens were commenting on the video, wondering whether the mascara was really worth the fight, albeit being limited edition.

There were also lots of mixed reactions and opinions about the video as some felt that it was just a prank.

On the other hand, many of them were convinced that it was real and the girls should chill out.

This netizen understood the pull of an offer that you just can’t resist!

Yeah, who can resist a good bargain, am I right?

Some of them even tagged their friends and girlfriends asking them not follow in these girls’ footsteps.

While a mascara is not a life-and-death matter, some of us felt that as true makeup addicts, we would fight tooth and nail for the last limited edition item. Last one means no more stock okay! Non-makeup connoisseurs were not impressed and felt that the girls were overreacting.

So, what did actually happen to both girls? Watch this video to find out more:

Finally, the truth is revealed! As seen from the video, the girls were actually actresses who were doing a social experiment it to find out how Malaysians would react to it. It certainly worked! Don’t you think so?

Still, if you are a bona fide makeup lover then you will understand the pain of missing out on your favourite beauty item. But don’t worry, you can always shop for it online or even better, on various shopping apps!

And for serious make-up bargain hunters, you can shop in the comfort of your own home instead! Away from crazy makeup chicks!

Since the video went pretty viral, here’s a voucher code very much inspired by the chaotic brawl!

But if you can’t get the item you want, remember to remain calm and cool!