Stanley Ho is known as ‘The King of Gambling’ and is Macau’s richest billionaire, thanks to the government-granted monopoly he held on the casino industry for 40 years. The 95-year-old has suffered a stroke back in July 2009, which has caused him to be confined to a wheelchair.

After the stroke, the billionaire decided to hand over the majority of his holding companies to his several wives and older children. Ho has 17 children from a total of four marriages and they are aged between 18 and 70 years old. That is seriously a huge gap!

Recently, one of his younger children, Laurinda Ho, caused quite a stir in social media when she posted a sexy bikini photo. That’s because the young beauty is usually clad in more demure outfits, but this time she flaunted her figure in a seductive black-coloured bikini. This resulted in her followers on her official Instagram account to praise her nice figure.

According to her Instagram, she was in Phuket for a holiday with a bunch of girlfriends to celebrate one of the girls’ birthday.

She also recorded a video that showed them cooking a meal for the birthday girl, and said, “Cooking a birthday meal for my best friends, they are so fortunate to be my best friends. If it was my boyfriend, I would treat him even better. But, how come I’m still single?” Guys, what are you waiting for?

Coming from such a wealthy background, you’d think that Laurinda would be flaunting her riches all over social media, but instead, her account focuses more on her family, cute cats and daily lifestyle.

Fun fact: Laurinda and her brother, Orlando are twins and they just celebrated their birthday a few weeks ago.

Also read: Inside The Life of a Rich Chinese Girl Whose Parents Shower Her With RM121,000 Monthly Allowance 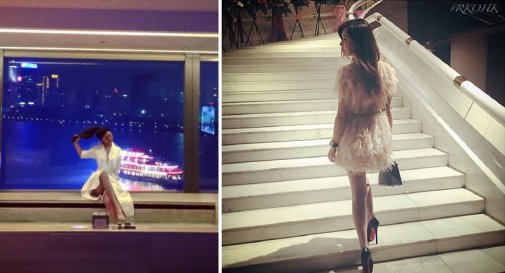