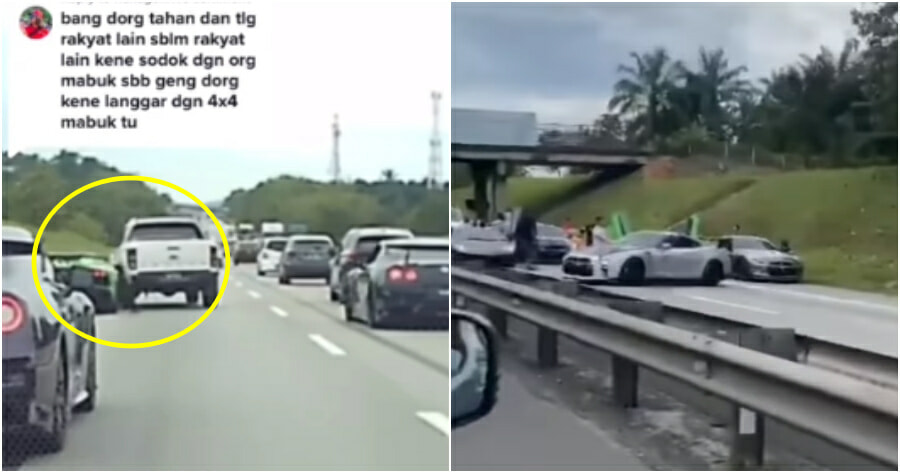 The highway is one of the places where accidents are prone to happen if drivers are not alert.

Recently, Vocket Car Club shared a video on their Instagram page showing a convoy of Lamborghini stopping in the middle of the highway after a 4X4 Ford Ranger hit one of them. According to the post, the driver of the 4X4 was allegedly drunk which prompted her to hit a few other vehicles as well.

After realising what happened, the Lamborghini convoy immediately stopped in the middle of the highway to avoid the 4X4 driver from hitting more vehicles. Unfortunately, their actions blocked the entire highway and caused massive congestion. You can watch the clip below.

Yesterday evening (20 March), Johor state police released a statement and revealed that the incident took place on Friday (18 March) around 6:10 pm at the North-South Expressway near the Sedenak exit. The police stated that the 4X4 tried to cut off the convoy by making a zig-zag and eventually hit one of the fancy sports cars, which resulted in an argument between the Lamborghini drivers and the 4X4 driver. 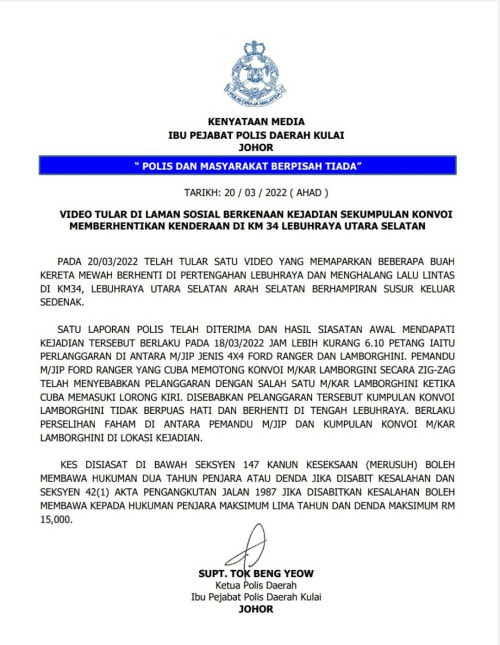 The matter is currently being investigated and if found guilty, offenders can face a maximum fine of RM15,000 or 5 years of jail time.

The video has since gone viral on social media and caused debate among netizens who have mixed reactions towards the incident.

“Hit the drunk driver for causing inconvenience to other road users!”

“Those Lamborghinis belong to some Dato. You’re done, 4×4 driver.”

“If you look at the video, the 4×4 driver did it intentionally. The Lamborghini made way for the Ford Ranger to cut him off.”

“Looks intentional to me, not drunk-driving.”

“The convoy itself is blocking the way. Where is the video before the 4X4 hit one of them?

Who are they to block the entire highway?

In the meantime, some of the netizens are not happy with how the fancy car drivers handled the situation.

“So it makes them right to stop the 4×4 driver and block the entire highway?”

“Good job. They’re blocking the highway at their own will.”

Do you think it was an accident or purely intentional?

Also read: PDRM: Ambulance in JB Was Stopped To Give Way To VIP Convoy To Avoid Possible Collision