Featured image is for visualization purposes only
ShareTweet

Humans make mistakes all the time. It is inevitable! But when these wrongs have been done, we learn from it and move on.

But apparently one man couldn’t get over a simple mistake of an innocent little boy, so much so that he decided to hurt the boy ‘to teach him a lesson’.

A Singaporean lady shared an outrageous story of her son playing soccer with his friend on the void deck of their apartment when the 10-year-old boy accidentally hit a toddler who was cycling past with the soccer ball.

When the father of the toddler saw his daughter crying, he lost his temper and demanded the young boy to stand upright while he kicked the ball at him. Repeatedly!!!

The first 3 shots were aimed at the kid’s legs but the 4th shot bounced off a wall and hit the poor boy in the face, making his nose bleed. 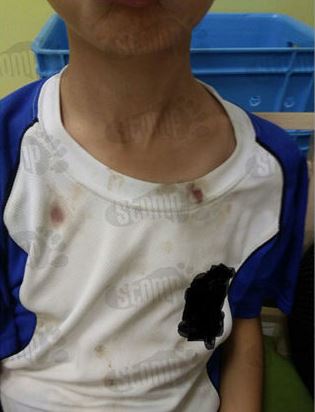 The shocked mother later found her son crying while covered in dirt and blood.

“Despite the fact that my son apologised profusely to him and his daughter, he abused his rights to enforce such brutal punishment unto my child.”

“Physical bruises are secondary. My son was so traumatised emotionally that his appetite and sleep were affected for days.”

But what is the worst part of this bullying case? The man escaped any punishment from this incident.

This sparked a fit of rage from Singaporeans all around. Many advised the mother to bring this issue to the local Member of Parliament (MP) while others condemned the Singaporean Police Force (SPF).

“Go to your MP in a meet the people session to seek redress on this matter. Please do not let the guy to go unpunished.”

“SPF useless la. can only ask for IC from people smoking under shelter or on the streets doing random checks, but when real problems like these surface, they tell you they cannot do anything.”

Regardless of whatever may have happened, abuse is still abuse. Not only was it an honest mistake, the child is too young to be hurt mercilessly like this. Even after he apologized!

If the police isn’t doing anything, let’s hope that at least Karma would get to the perpetrator.