So I’m from Malaysia but I was in Korea for a few days’ trip. I met this Korean guy online and agreed to go out with him. He seemed pretty nice, attentive and even recommended me places to visit.

At first I was pretty nervous. He did not have any profile pictures but he has been nice enough so far to hang out as a friend.

But just before we met up, he messaged me this: 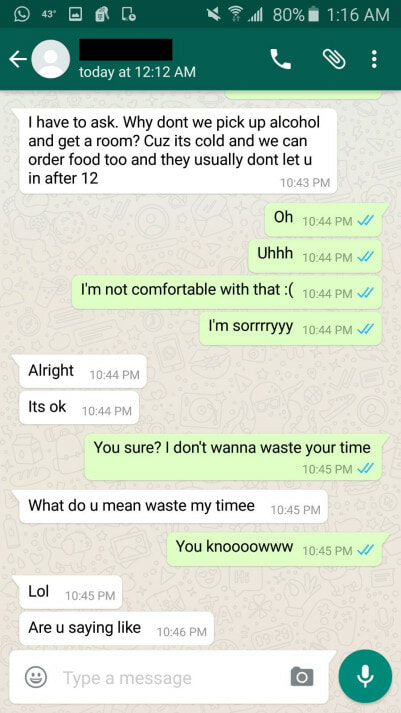 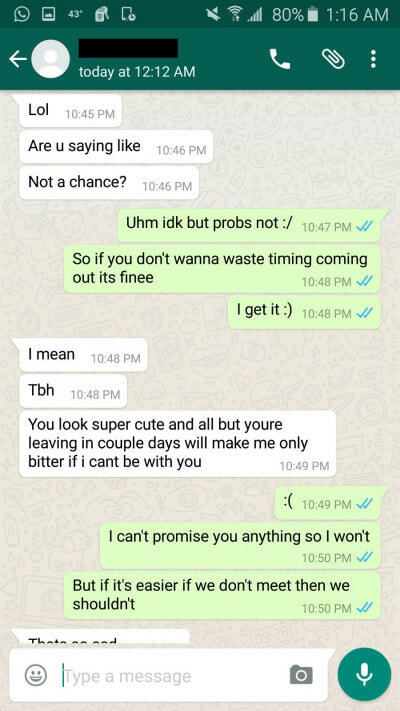 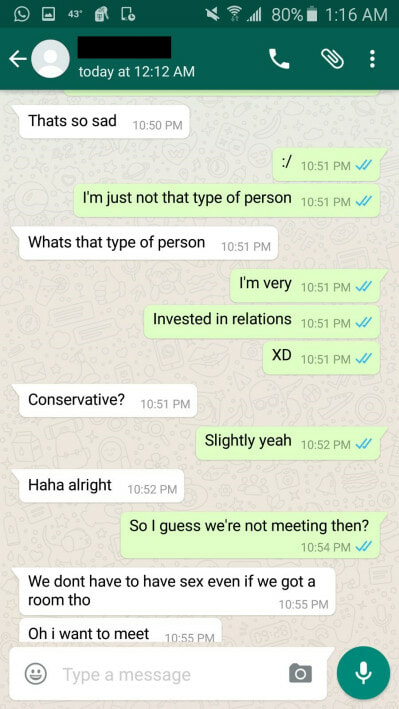 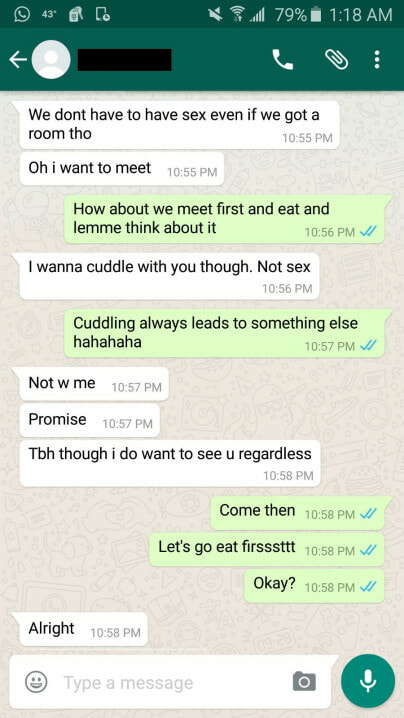 At this point I was freaking out whether to still continue the meet. But I still stuck with it because I felt bad to pull out last minute.

We hung out together over a meal and had some good conversations to get to know each other. But the whole time, I could feel that he was obsessive. When the meal was done, he was reluctant to let me leave!

He kept trying to get me to go to a room with him when I’ve very persistently said no. He kept begging non-stop for almost an hour. For the record I never led him on. I kept saying no a kabazillion times but he probably lost his ears because he couldn’t fricking hear my rejections to his requests.

I was so frustrated at this point that I demanded him to take me home. We took a cab and yep, on the way back he kept pestering over and over. I did not want anything to do with him. I gave him back my share of the food and taxi money and said my goodbyes.

He obviously didn’t get the hint because he wouldn’t stop texting me the next day asking to meet again, even though I didn’t respond to his messages. I was tempted to scold him off but I felt bad for doing so. Instead, I just tried to subtly turn him down. 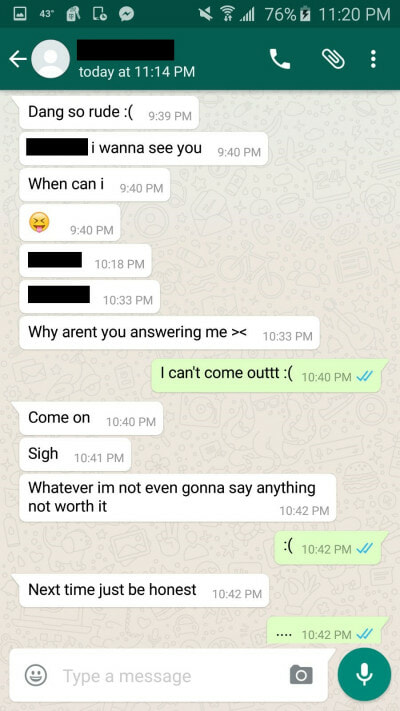 The blanks in the chat is my name. So you could imagine how clingy he was.

However, things took a huge turn. And it caught me completely by surprise. 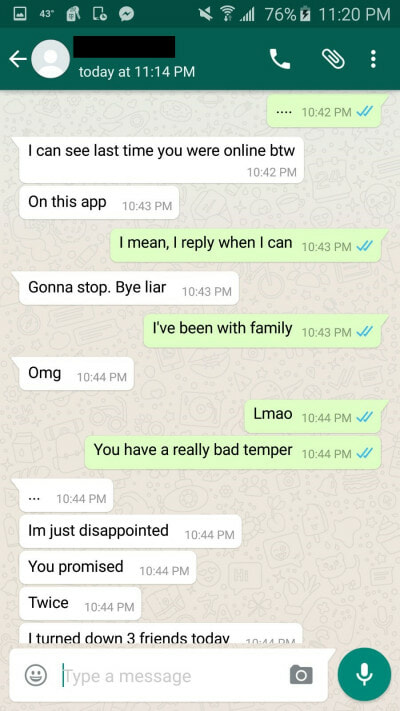 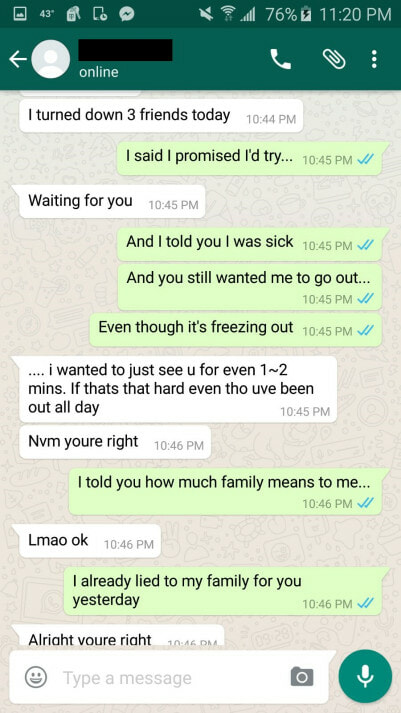 I left it at that because I did not owe him anything and did not want to respond to his hostility any longer. That’s when he sent the most hurtful and evil message to me.

Someone who said he really liked me just yesterday now cursed me and my family. 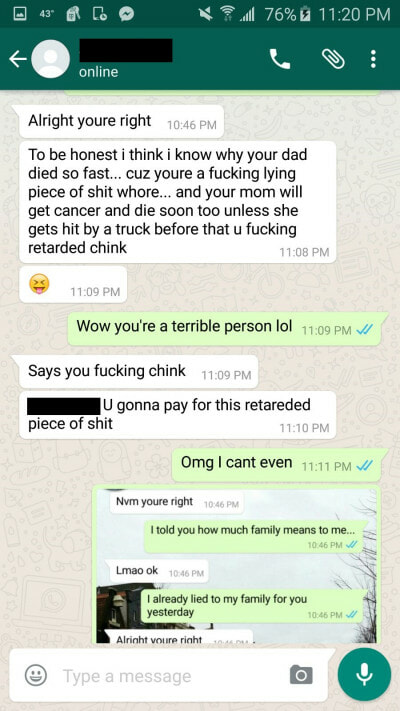 My dad passed away just 3 years ago and my mom was diagnosed with breast cancer before. This guy used whatever heart-to-heart conversations we had that night and turned it against me. How I felt was indescribable. How could someone be this mean? 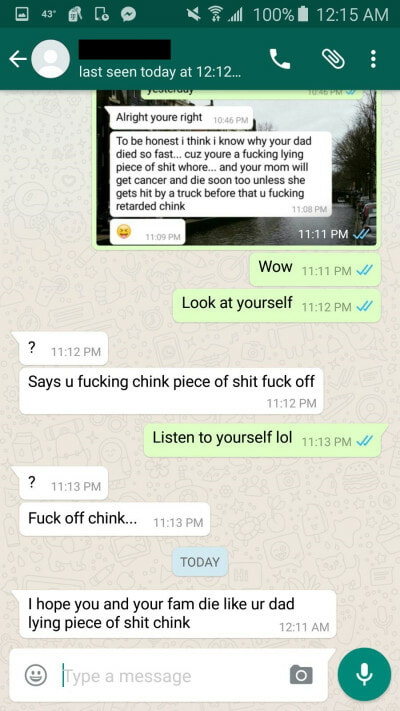 After everything he said, it was still not enough. He just had to curse once more. Notice the one hour difference between his last two text.

Can you believe how crazy this person got? I’m still finding it hard to believe someone could react like that!

He’s definitely the craziest person I’ve met in my life. Also, hopefully the last one (yes I already blocked him). I hope he will be able to change his ways and be a better person. As for me, I’ll try not to let his words affect me.

In the meantime, spread the word, and hopefully that son of a gun sees this post.