Disclaimer: Featured image in small box is for illustration purposes only

Remember during our teenage years, our parents would always nag at us to come home early? And if we don’t.. prepare to face the Asian parents’ wrath lah.

Well, one 26-year-old guy from Miri, Sarawak came home late, but it wasn’t his parents who were pissed off. It was his wife.. and you know how crazy some women can get. But this lady, she took it to a whole new level of crazy.

Well, the infuriated lady was SO angry that she bit off 1cm of his left pinky!! And if that wasn’t insane enough, that wife swallowed it! This is not most guy’s definitely of swallow.

Yep, you read that right.

But what did that man do that got her so mad though?

Well, it was because the husband got home late and that infuriated the lady.

Before pointing fingers that maybe he curi makan outside, apparently the husband had returned home at 11.30PM from shopping for some necessities when the incident took place. Plus, it was reported that this wasn’t the first time the husband had lodged a report against his crazy wife.

Anyway, after chewing off his finger, the heartless 21-year-old wife just left him alone to bleed without attending to her husband.

(Translation: As he stepped into the house, the woman went crazy and behaved violently by biting the husband’s finger. Without any feelings of remorse, she just left her husband to bear the pain until morning.”) 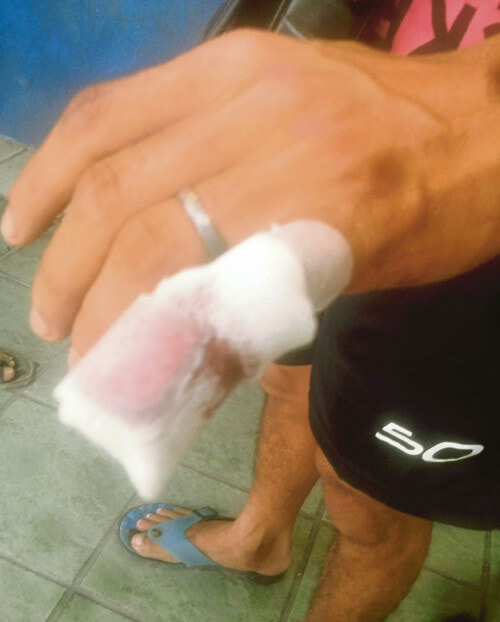 The poor man went to a private clinic for treatment and then off to the balai to report his demented wife. The wife probably needs a mental health check because he had previously reported the wife for beating him up over a petty matter. This is just pure domestic violence!

The couple both have a 15-month-old daughter together. Let’s hope that she doesn’t inherit the crazy-genes from the mom nor suffer any abuse from her.