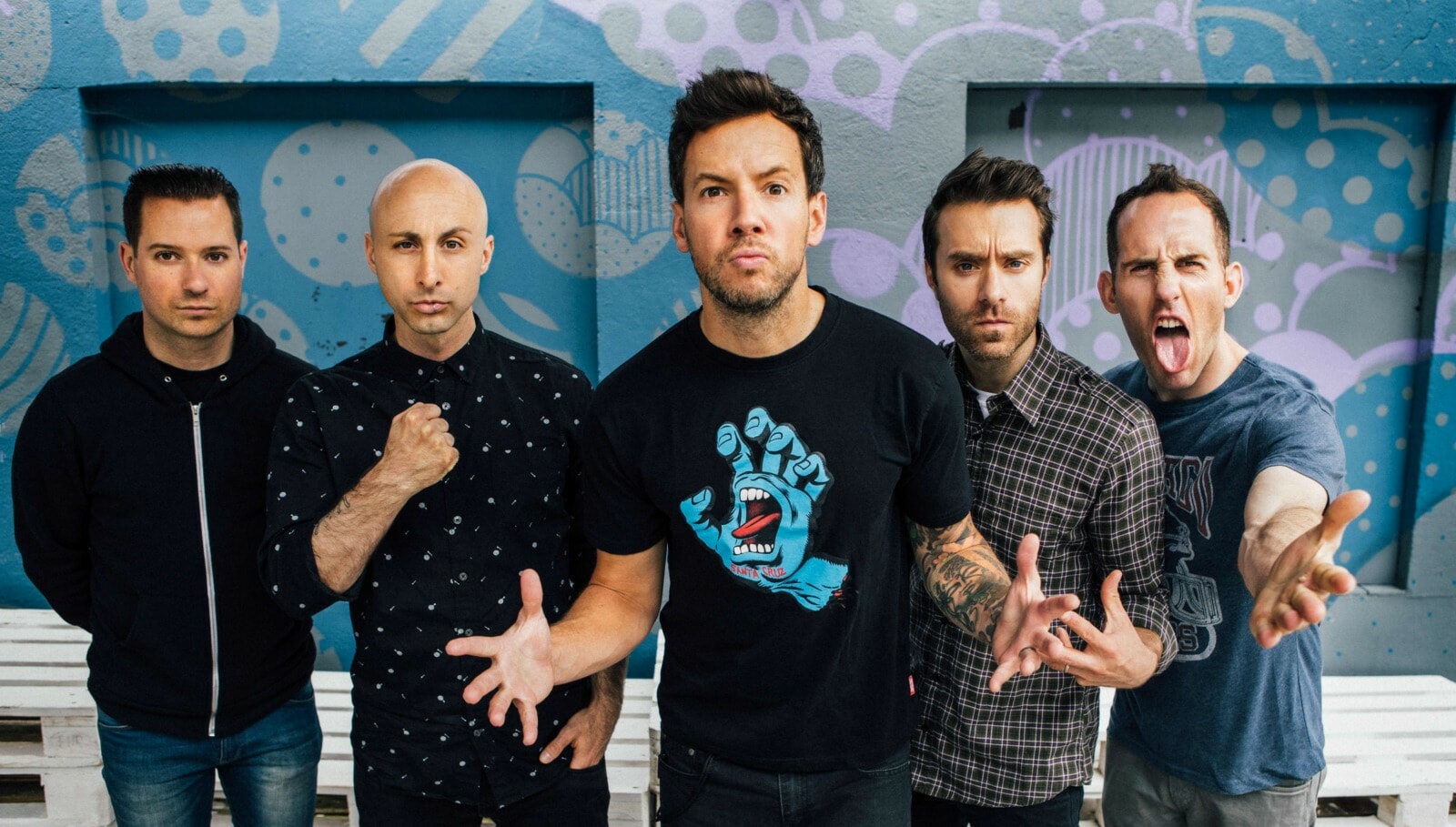 Who else remembers jamming out to ‘Perfect’, ‘Welcome to my Life’, ‘Your love is a lie’ and more during their primary or highschool days? There was a time when radio stations couldn’t go 60 minutes without playing ‘Shut Up’ at least once.

90’s kids, you know what I’m talking about.  Even reading those song titles would tug on your nostalgic feels.

Simple Plan’s tunes have always been catchy and filled with sonic punch, but more importantly, their music gives a voice to people who just want to be themselves, no questions asked. Well, get ready Malaysia, because the band is back with a vengeance – and soon they’ll be back in Kuala Lumpur too!

After a long wait of 3 years since their last album, the Canadian band from Montreal finally dropped their newest studio album “Taking One for the Team” in February this year, making it their 5th album since the band formed in 1999. Talk about longevity!

While they will always remain a pop-punk band at heart, Simple Plan is not afraid of exploring new territory and being adventurous about their music. Aside from their usual rock anthems, the group have taken inspiration from various genres on their new album, with songs like Singing in the Rain and Perfectly Perfect bringing a reggae and power ballad vibe to proceedings.

With the release of a new album comes the much anticipated tour and members Pierre Bouvier (vocals), Chuck Comeau (drums), David Desrosiers (bass, backing vocals), Sébastien Lefebvre (rhythm guitar, backing vocals), and Jeff Stinco (lead guitar) take on the world one step at a time through their “Taking One for the Team” tour. 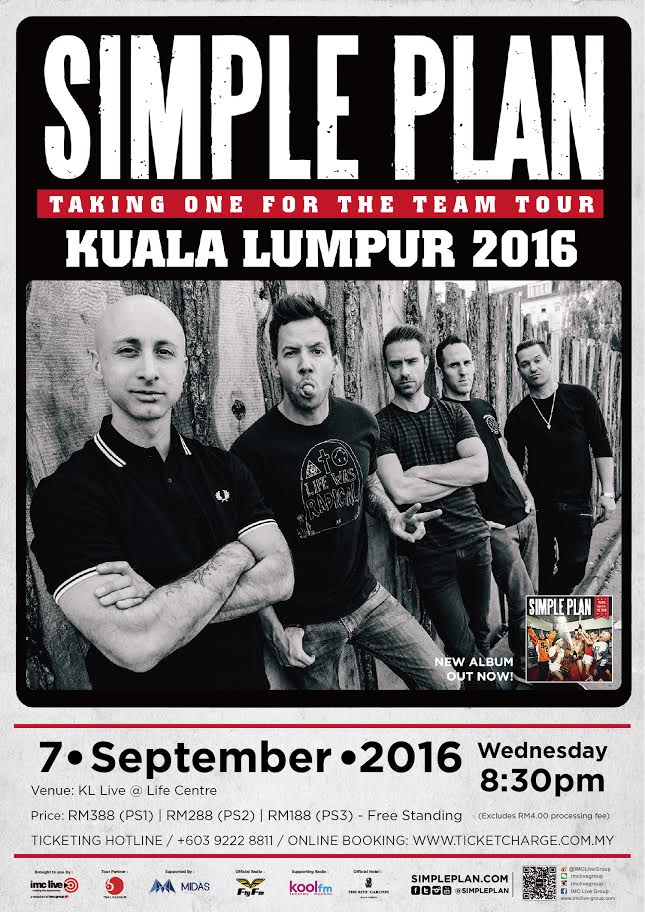 The band will make their way down to Kuala Lumpur, Malaysia on 7th September 2016 after their stop in Seoul, Korea and Singapore.

So Malaysian fans, be prepared. Be very prepared.

Join the band in the celebration of their new album this 7th September 2016 live at KL Live by rocking out to a mix of fresh beats and those classic Simple Plan favourites you know and love.

In addition to that, wouldn’t it be crazily awesome to join the band on their SEA tour? What’s more, flights, accommodation and concert tickets for two to their shows are all already paid for! 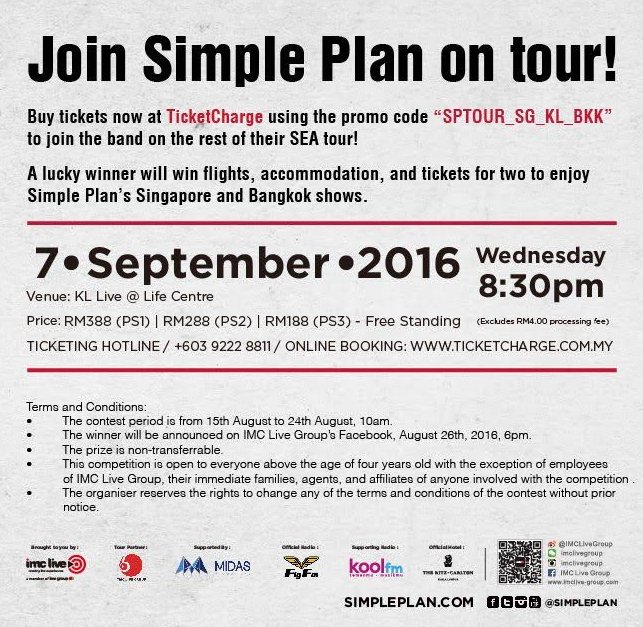 Only concert tickets purchased here along with the promo code “SPTOUR_SG_KL_BKK” entitles you to that magical chance of joining Simple Plan on their tour. So what are you waiting for? Hurry and get your tickets now – prices start only at RM188.

Who know’s you might just be that lucky one, but one thing’s for sure. You’ll be well on your way to an endless night of great music and head bopping. 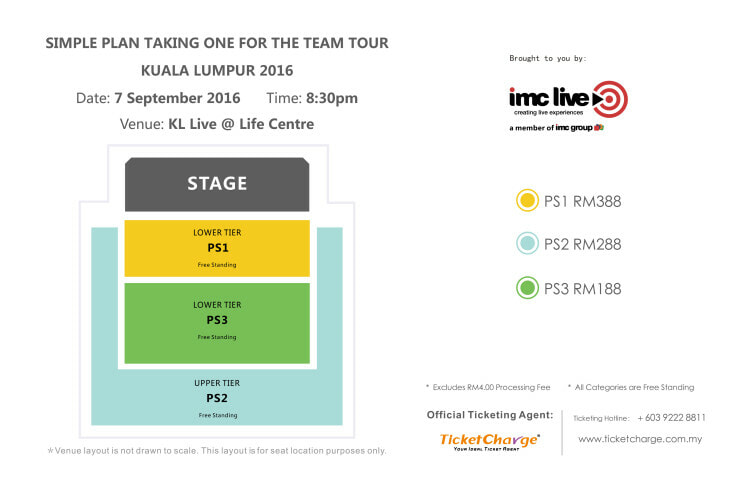