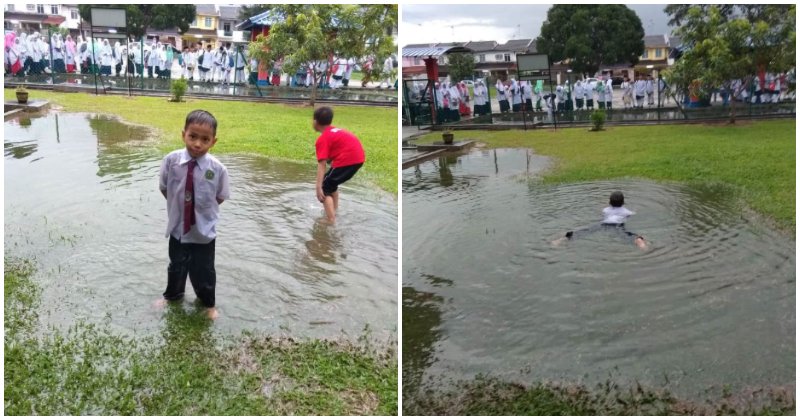 We’re all considerably used to how hot the Malaysian weather is, and we all have our own individual ways of battling it. Some wear light coloured clothing, some avoid going outside in general. Some take a dip in a puddle in the middle of a school field while the rest of the school stares on, probably jealously.

As shared by Rozita Abdul Razak in a now viral Facebook posting, her son decided to take matters into his own hands on a hot day by submerging himself in a large puddle on the school field.

According to her posting, Rozita was probably waiting for her son to finish school when the incident happened.

“I was shocked! There was a teacher who told me ‘That’s your son playing in the water!!’, I thought it was just a little bit but turns out he was swimming! His elder brother confronted him but ended up getting chased. When I asked him what he was doing, he answered ‘Mum, you never take me to a pool!‘. I didn’t chase after him. He would have ran the entire perimeter of the school and I would have gotten tired. It was even more fun considering he had a large audience. #Child God’s gift.” 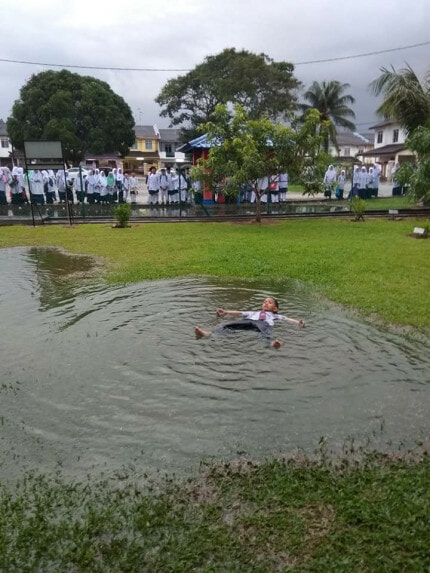 The boy who, seems to have perfected the art of floating in a puddle, not only managed to pull in a large audience but also reminded a lot of us old people of those sweet memories of being a care-free child.

This comment reads, “Keep it up kid, you’ll miss your childhood when you’re big.”

This one on the other hand goes, “These will be the sweetest memories you’ll have in life when you’ve grown up, kid… Uncle misses those times.”

Some even further encouraged him upon seeing how happily he was enjoying his puddle.

This comment goes, “Invite your friends to swim along, more fun!”

One Facebook page even decided to offer the boy and his brother a trip to satisfy their need to swim.

“Jom jom!! We want to offer a COMPLIMENTARY trip to the island for you and your brother. Then you can swim until you’re satisfied.”

Rozita’s posting has since garnered over 10,000 shares and has won the internet.

Anyone willing to send me on vacation if I dip myself in a puddle? 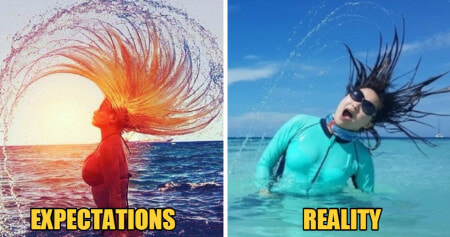