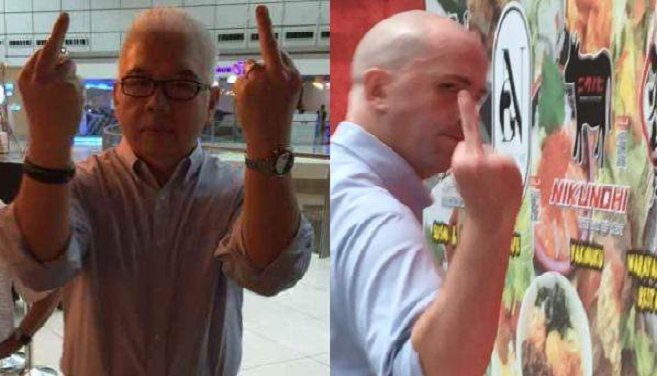 A post by Mr T went viral after he posted a contribution to All Singapore Stuff about a man who was being racist to him, shouted obscene words and flipping him the bird. The internet was taken aback at the drama that stirred between the two as Mr T claims he was scolded for no reason. Read the full story here.

However, there’s always two sides of the story and this time, Mr W who was labelled a racist hopes that his side of the story will be cleared. Sharing his experience to All Singapore Stuff, he writes:

“I am the person in the picture accused of being a racist. I regret and apologise that I should not show the finger. There’s always two sides to the story.

When I arrived at the restaurant, it was empty and not opened yet. There were four other gentlemen together with this Mr T milling around. No queue in sight. I went up to the waitress and indicated table for two. She informed me that it will be opened in five minutes time.

Then the man Mr T told me the queue starts with him. I said “oh is it.” Because there really was no queue in sight. Seven people milling around in front of an empty restaurant including both of us. And before I have the chance to say anything further, he went into his tirade. “You Singaporeans are all assholes. You think that you are entitled to everything. ” (His exact quote which he did not mention).

I was obviously shocked and when I questioned why he is so rude, he went further to say “Assholes are all the same.” I was shocked beyond belief and my only response was to ask him what he’s doing in Singapore if we are all assholes?

When he kept on and on and the only way to shut him up was to show him the finger which I know in hindsight I shouldn’t.

But truth be told, it’s not in my nature or Singaporeans to cut queue and how many of you would like to have been called assholes over something as trivial as mistaking where the queue is when there’s no queue in the first place and there were only seven diners including us.

I let you be the judge because anyone will react very strongly too when some one says all “Singaporeans are assholes”. I am sure he did not mention this. Just like he did not mentioned he showed me the finger too. Please see the pictures.

Yes, I was given a complimentary meal too because I also complained to the manager what an abusive person he is. Honestly, I am utterly shocked how abusive and aggressive Mr T can be over something so trivial.

I hope to let this matter rest. It’s so trivial and I hope you can help me tell my side of the story because I am not a racist. I am a true Singaporean living in a multi racial society.”

There’s always two sides of the story to everything, and most of the time it’s he say she say. So what actually went down? Doesn’t even matter I suppose.