Our parents brought us up by caring for us until they’re unable to, and in turn, we should care for them and their needs as they get older.

On 25 April, the daughter of a 77-year-old man had reported him missing, and after an entire month of searching, she resorted to asking MCA for help, hoping to receive more support on this matter.

At the press release on 24 May, she said that her father has Alzheimer’s and he could’ve forgotten his way home. Luckily, the family received a call the next day, notifying them that someone spotted him on the streets at Bukit Bintang on 16 May.

Apparently, he had been lingering on the streets as well as starving for more than five days! His family contacted the Pudu police station for his whereabouts when they just found out that this man had been transferred to Sungai Buloh’s Department of Social Welfare already.

The man finally reunited with his family at the Social Welfare Department on 30 May. However, it’s reported that his family was unable to care for him, and they decided to relocate him to an old folks’ home. Wait, what?

According to Guang Ming Daily, the uncle has four children, but he had been living alone. And he said that his children refused to take care of him, which then led him to run away from his home.

Netizens were angered and disappointed at the family’s behaviour.

“We should definitely work hard to earn money to take care of ourselves when we get old. Don’t depend on our children to care for us; the world has changed.”

“The parents could raise four children, but all four children couldn’t even take care of a father. What kind of world are we living in?”

We’re unsure of the reasons why the children couldn’t take care of their old father, but there are always two or more sides to any story.

Regardless of what the reason was, it’s a disheartening piece of news that an elderly person could be rejected by his own children.

Also read: This 90yo Uncle Has Been Missing From His Home in Damansara for 4 Days, Public Urged to Look Out 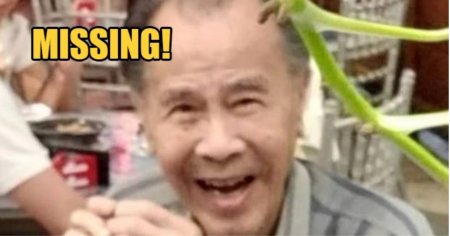