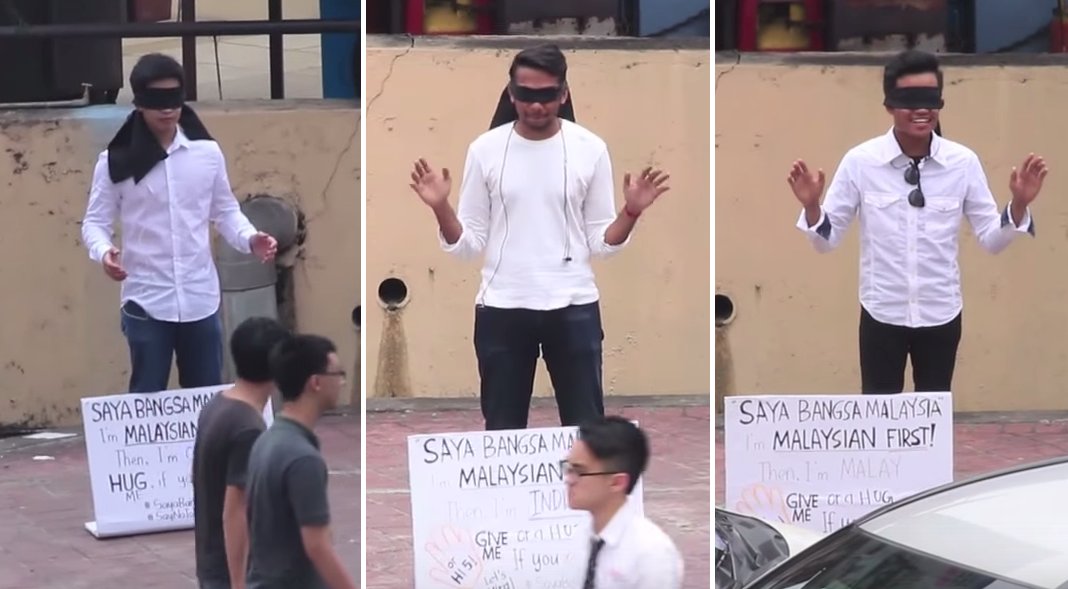 With several racial chaos happening around us, it’s hard not to wonder what the future holds for us. Ever since young, we were taught to embrace our diversity. We were known as the country with three main races and the languages to go with it, not to mention the ever heavenly foods.

This week, Sathisvaran and two of his friends decided to do a social experiment on the streets of Klang Valley.

The trios took to one of the streets in Subang and each of them took turns standing there for an hour.. and get this, they were blindfolded! Pretty terrifying if you asked me :/. If you ever got blindfolded, you’d know how scary the experience is.

In front of them was a sign that wrote:

And it prompted anyone who agrees with their statement of being 1Malaysia to give a HUG or a Hi-5.

They stood with their hands out, welcoming whoever who wanted to come up to them.

Their project caught attention of passerbys. One of which was Facebook user Ashley Greig, who wrote a Facebook post about it and went viral. She wrote:

As I was leaving my workplace, I bumped into this boy who was standing with his arms wide open. There were many people who were passing by and had stopped to give him a hug each. I saw men and women of all races and religious beliefs giving him hugs and shouting out words of encouragement.

It was truly a beautiful sight. By then, he was already in tears.

Deeply moved, I approached him and gave him a long, warm hug and told him, “Whoever it is that you are, I’m proud of you. I’m proud of what you’re doing here. Thank you for giving us all hope that there is a better tomorrow waiting for us.” I walked away with tears in both our eyes, and a renewed sense of hope for our beloved Malaysia.‪

We contacted Sathisvaran to ask him about his whole experience doing the project and this is what he had to say when he teared up:

“I was vey scared and nervous at first, and doing this was totally out from my comfort zone. However, I wanted to push the barriers and just do it. After being blindfolded, my hands were shaking from nervousness till I got the first hug which was within 2 mins. I couldn’t contain myself and was overwhelmed. I cried from the respose and the support i got from the public.”

When asked about the idea behind the video, he told us:

“It is to create a new wave of culture in identifying ourselves as Malaysian first.

So we see each other as one.

There’s no difference between the races.”

Watch their video below:

It was pretty overwhelming seeing people of all races approaching them to hug them in support of #‎SayaBangsaMalaysia‬ ‪#‎SayNoToRacism‬.