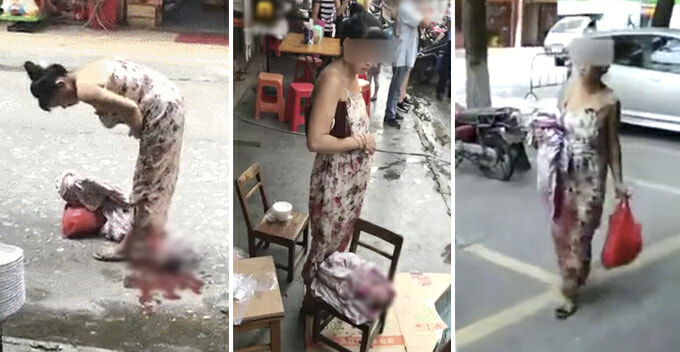 Going into labour is a big deal for most pregnant mothers. All necessary steps are taken to minimise complications during the process of giving birth. However, the way this mum handled her delivery absolutely blew everyone’s mind away.

Just a few days ago, a pregnant woman who was wearing a dress gave birth on the street. She then picked up her newborn and walked back home, as if nothing had happened. This incident happened in Guangdong city, China on September 2, as reported by Shanghaiist.

During the time of the incident, the expecting mother was walking on the street possibly doing her grocery shopping. Suddenly, her water broke and she had no choice but to give birth on the spot.

Instead of frantically asking for help (like we usually see in the movies), the mother calmly delivered the baby. Before the crowd even had time to react, the baby was already lying in a pool of blood and amniotic fluid on the street. The newborn was kicking and making noises, which is a good sign.

This rare scene had garnered a lot of attention on the street. The crowd soon swelled up with some of them providing chairs and a sheet of cardboard to the mother. The newborn was placed on the chair while waiting for paramedics to arrive. 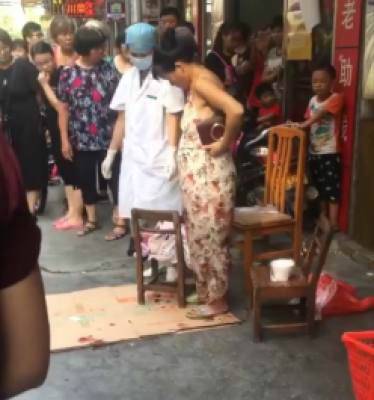 Apparently there wasn’t any birth complication, so she calmly walked home with the newborn in hand, not forgetting her bag of groceries. Say whattt…

This news went super viral on social media especially in China. Many netizens were stunned by how tough the mother was in handling the situation.

“This is how it was done before hospitals came about. The money she saved could be used to give the family, including the mother and the baby, a better life. Plus, it’s not like she chose to give birth on the street, so please look at the bright side. Not everyone has the courage to do that,” a netizen commented.

However, some netizens criticised the mother for being selfish.

“If she truly cares about her baby, she’d have followed the ambulance to a hospital for a proper examination, and not just walked home. What if the baby was born premature?” another Facebook user said.

Although not everyone agrees with her action of walking home with the newborn baby, one thing we could all agree on is that she is a one tough mother. Ain’t that right guys? 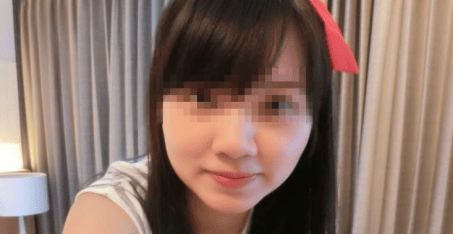