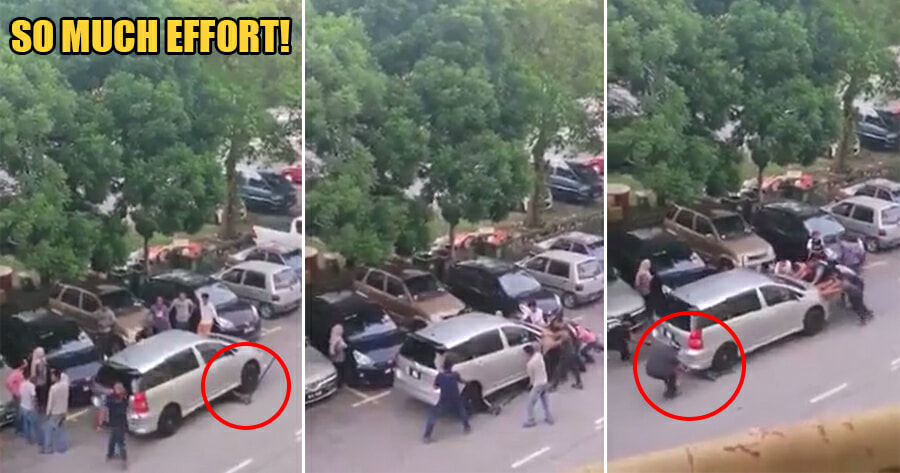 I’m sure we all can agree that double parkers are probably some of the most annoying people on this planet, especially those who don’t leave a number on their dashboard or put their car in neutral gear.

“Victims” of these inconsiderate, selfish and entitled people are often left stuck in their parking spots with nowhere to go and nothing to do but to wait until the owner returns.

However, this doesn’t have to happen when you are surrounded by kind and helpful Malaysians who are willing to work together to solve the problem at hand.

A video posted on Facebook shows a Toyota Wish double parked in front of a Perodua Myvi and Perodua Kembara somewhere in Bangi, Selangor. It seems like the two owners and several other bystanders start gathering around to discuss what they can do about the Toyota Wish.

Suddenly, two men appear, each dragging a hydraulic car jack along with them and placing the jacks under the front of the car to hoist it up. It’s not clear what they intend to do at this point of time, but a few moments later, another two men with two more car jacks arrive to help.

I’m speculating that this incident might’ve been near a mechanic shop, which why there were so many car jacks available.

Another two car jacks are placed at the back of the car, which lifts the WHOLE car in the air. They then try to push the car, but obviously it doesn’t budge as its tyres aren’t even touching the ground.

So they improvise and remove the front two car jacks and realign the ones at the back. Instead of inserting them from the sides, it appears that they place the car jacks right under the car’s back tyres. Basically, the car jacks are the car’s ‘new tyres’.

About 10 of them start pushing the car from the front, and this time they are more successful as the car actually starts moving! Genius!

The blocked car owners then drive off as the men start dispersing after a job well-done.

Here’s a sped-up version of the whole video:

Wow! Good job to all these helpful and hardworking people. So much effort was put in just to help two helpless car owners.

Also read: Watch: Horror Movie The Nun Comes to Life in Carpark & It’s So Real You Might Just Pee Your Pants 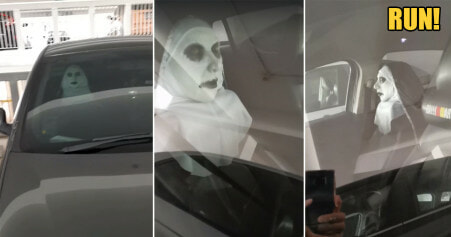