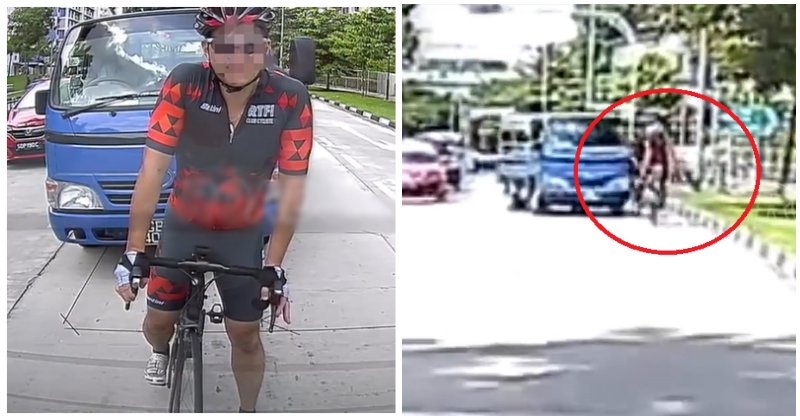 Being courteous to your fellow road users should be taught in driving schools these days.

From inconsiderate motorcyclists to numerous counts of jaywalkers, maneuvering your vehicle today is never a walk in the park.

Recently, a video went viral in Singapore showing how a cyclist was sideswiped by a lorry. And boy was it really satisfying to watch!

Road rage between cyclist and lorry driver of GBD4011Y."TO BE HONEST, it is already hard to drive in one lane TOGETHER with a cyclist. And in this case, the cyclist was selfish and irresponsible to ride in the middle of the lane. Thus, the lorry honked TWICE. Please note, TWO SHORT HONKS ONLY. (Once to ask him to move to the side, another time when they ignored the horn).However, the rowdy cyclist went beside the lorry and SMASH THE SIDE MIRROR, what the hell? And the lorry driver banged him onto the grass verge just to get back at the cyclist for what he has done. The cyclist fell to the ground but WAS NOT injured. He stood up and the lorry uncle stopped his vehicle.Do you think the cyclist is right? How can one just smash the mirror and get rowdy just because he think he SHOULDNT GET HONKED. Is keeping to the side of the roads so hard?"Credit: Y Lim

The video believed to be taken in Pasir Ris Drive 3, Singapore, was sourced from a dash cam, and it showed a cyclist breaking the side mirror of a lorry whose driver had allegedly honked at him while he was cycling in the middle of the road.

Riding with a companion, the said cyclist veered to the middle of the lane and stopped in front of a blue lorry. He even turned around to give the driver a look.

According to Stomp, the lorry driver honked twice which apparently agitated the cyclist. The rude cyclist later deliberately slowed down to ride beside the lorry so he could throw a bottle at the lorry’s side mirror. Tsk tsk! What a shameful behaviour!

Not taking any shit from the cyclist, the lorry immediately responded by sideswiping the cyclist onto the pavement, to which later the cyclist quickly got back onto his feet before the video ends.

The video which garnered more than 500k views, were full of comments condemning inconsiderate cyclists who are guilty of doing as they please when cycling.

Eric Amadeus commented on ROADS.sg, “Arrogant and inconsiderate cyclist, he deserved it. Should send him to Road Safety Park to learn how to cycle safely on the road.”

Vincent Thomas wrote, “Kudos to the lorry driver. Too bad for the girlie spandex rider. DON’T get well soon! MERRY Christmas in hospital.”

My my… He went dark on this one.

What do you think? Is the action of the cyclist warranted? Share with us your opinion in the comments below. 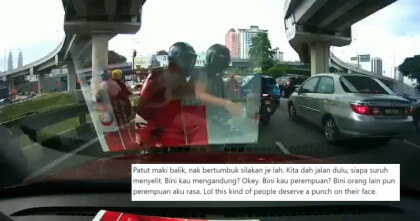