While everyone is trying to adopt their best hygiene habits to keep the Wuhan novel coronavirus at bay, you would be shocked to know that there are some unscrupulous individuals who have only tried to make things worse, more so within China, where cases of the virus have only increased in numbers as each day passes. Whether done out of spite, anger, or pure mischief, their acts only serve to worsen the current state of things in the nation.

One especially notorious act was caught on security camera footage as reported by Sin Chew Daily, and it will disgust you just as much as it would horrify you to witness.

Since the Wuhan novel coronavirus outbreak in China occurred, many elevators have been equipped with disposable hand towels to allow passengers the convenience to touch elevator buttons without coming into contact with the buttons themselves. This is done in an effort to stop the novel coronavirus from spreading, as you probably know, the virus can be spread by touch alone.

In a video that was widely circulated within Chinese social media, a woman who was riding one of these elevators equipped with a paper towel dispenser could be seen using multiple sheets of the paper towels to wipe both her nose and mouth, before carelessly tossing them to the ground.

But what is worse is when she is joined by a group, which most prominently includes one man who is either spiteful, angry, or plain cruel. Grabbing the disposable paper towels, he proceeds tuck his face mask down, and then spits on the paper towel before wiping it all over the elevator buttons!

What’s worse is that he continues to spit on the paper towels and wipe them all over the elevator button panel three times, completely contaminating the surface with his spit! As a result, the security camera footage was shared online and through investigations made into the case, the man was soon found by police and sentenced to 10 days in prison for creating a public panic.

Thankfully, the man did not exhibit any symptoms of the Wuhan novel coronavirus and has no history of traveling into Hubei or Wuhan.

But regardless, such disgusting acts should never be acceptable, especially during the height of a health crisis! 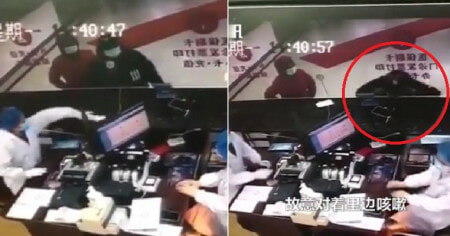