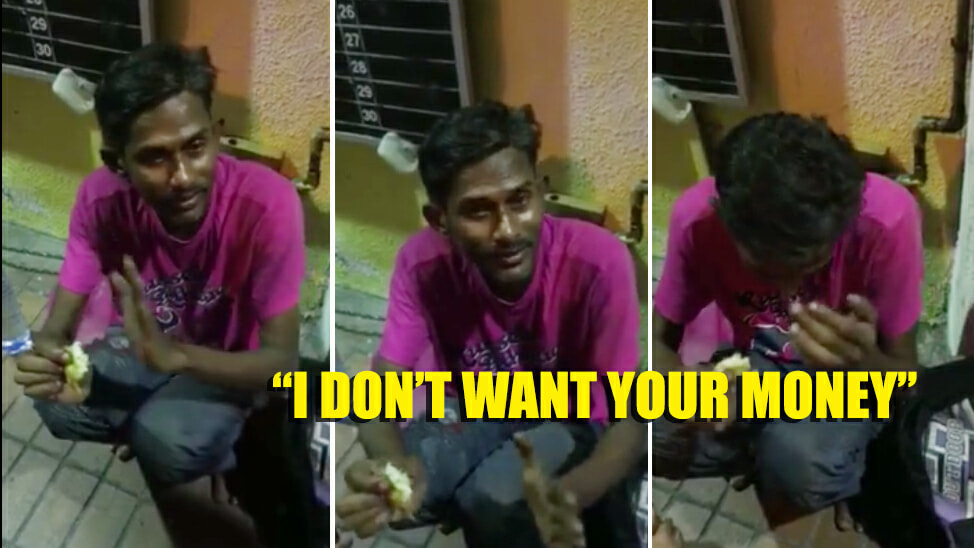 ‘Feed the Poor’ is a Malaysian Facebook page started by a group of ordinary people with an extraordinary goal to well, feed the poor and homeless people of Penang.

In a recent video posted to their page, it featured what seemed like any other beggar out in the streets.

However, upon giving him food and asking about himself, they realise that he was not a beggar at all! In fact, the homeless man wouldn’t even accept any money strangers try to hand to him.

As portrayed in the image below, he’s a very polite and humble man.

Apparently the Indian man was known as Gunalan. He has a diploma but has no job due to retrenchment and leg surgery. He has 2 daughters to support yet he did not even want to accept money. All he wanted was a job.

“I don’t like this living. I’m not a beggar and I don’t want to be in the street.” a teary Gunalan said in the video.

After ‘Feed the Poor’ posted the video on the page, kind hearted Malaysians asked to provide his mobile phone number so they could contact him instead.

Netizens all over Malaysia were touched by Mr Gunalan’s strive to earn a living instead of begging for money. Many others also commended Miss Vilaa for her help to secure a job for him and helping him rebuild his life.